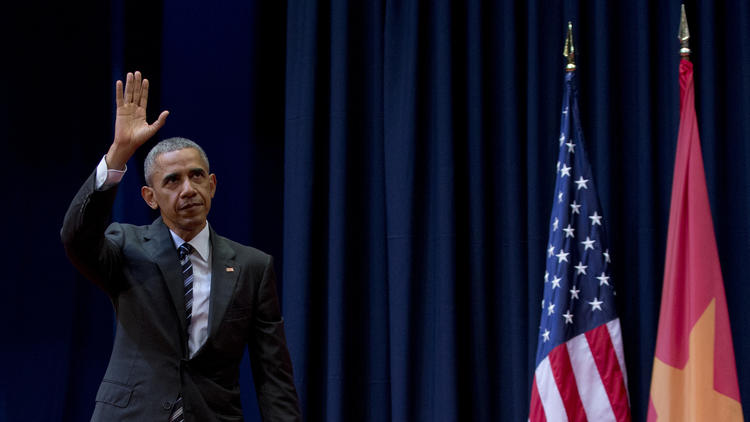 President Obama is racing against the clock to cement a massive Pacific Rim trade deal that all of his potential successors oppose, with his administration eyeing a looming fight on Capitol Hill while starting to implement as much of the complicated pact as it can.

The effort begins in Vietnam, where Obama spent the last three days touting the merits of the 12-nation Trans Pacific Partnership, which would link 40% of the global economy, and reassuring Vietnamese leaders key to the deal that Congress will ultimately overcome the thorny politics of trade and ratify the agreement.

“Nothing is easy in Washington these days,” Obama assured participants at a round table discussion with business leaders Tuesday in Ho Chi Minh City, the heart of what is one of Asia’s fastest-growing economies. “But despite sometimes the lack of cooperation with Congress, I seem to be able to get a lot of things done anyway.”

Ordinarily, a presidential administration would wait until Congress ratifies a trade agreement before putting it into force with member nations. But with just eight months left in office and presidential candidates Hillary Clinton, Donald Trump and Bernie Sanders all against the deal, Obama and his advisors appear to have concluded that they must speed up that lengthy process to preserve the trade pact.

“In this case, we’ve decided to accelerate that,” U.S. Trade Representative Mike Froman said. “In consultation with Congress, we are already working with the countries in the region on the various steps that they’ll need to take to bring themselves into compliance with TPP.”

He cited Vietnam as an example, saying U.S. officials have traveled to the country over the last couple of months to discuss its obligations under the deal.

TPP would create the world’s largest free trade zone, deepening economic ties between the U.S. and fellow signatories including Canada, Mexico, Japan, Australia and Singapore. The administration says it would eventually eliminate more than 18,000 tariffs that other nations impose on American imports such as textiles, chemical goods, fruit, beef and wine and beer.

Last week’s release of an independent report analyzing TPP’s economic impact on the U.S. cleared the way for Congress to begin formal consideration of the final agreement. The White House says it is in regular consultation with congressional leaders about the best legislative strategy going forward, and wants to see it approved as soon as possible.

But both Democratic and Republican leaders in Congress have said they are reluctant to bring the measure to a vote during the heat of a presidential campaign in which the three remaining presidential contenders are avowed opponents.

The White House says neither the U.S. nor the other signatories are willing to reopen the agreement to make changes that might bring additional political support here. But by beginning the implementation work with countries like Vietnam, they can take steps that could help make wary members of Congress more confident that U.S. partners will abide by the terms of the agreement reached last fall.

Some critics in Congress were particularly skeptical of what they saw as overly generous terms for Vietnam to comply with new labor and environmental standards of the deal, as well as an extended timeline that it was granted to begin setting up independent trade unions.

And a report from the International Trade Commission released last week, which found that the deal would boost U.S. annual real income by only a modest $57.3 billion by 2032, gave ammunition to opponents in organized labor who said its potential impact on U.S. manufacturing was too severe.

“[The] report is so damaging that any reasonable observer would have to wonder why the administration or Congress would spend even one more day trying to turn this disastrous proposal into a reality,” AFL-CIO President Richard Trumka said.

The administration’s ability to continue addressing lawmakers’ concerns will be key to the timing of any vote, said House Ways and Means Committee Chairman Kevin Brady (R-Texas), who supports what he calls an “imperfect” agreement.

“We cannot move forward until the administration has addressed member concerns on key aspects of the agreement,” he said, demanding reassurance from the White House that trade partners comply with the deal and that it will benefit the U.S.

To win support in Congress, the Obama administration is making  a familiar case that boils down to one question: What will China do?

During its full-court press on Capitol Hill to secure passage of a key preliminary measure, administration officials found that raising the specter of China writing the rules for international trade was among their most successful arguments.

Their case goes like this: The pact as written raises standards in places where the U.S. already does significant business, while dropping tariffs that inhibit the sale of U.S. goods in those countries. And if the U.S. were to back away, China would likely swoop into the void and forge its own accord, potentially expanding its influence while diminishing the United States’.

Vietnam’s burgeoning middle class is a fertile market for U.S. goods, particularly for machinery and automotive exports. On Monday, Obama was on hand as U.S. firms including Boeing and GE signed commercial deals worth $16 billion in Vietnam.

In an address to the Vietnamese people, Obama said he strongly supported the deal so that “you’ll also be able to buy more of our goods, ‘made in America.’”

Without mentioning China by name, he alluded to the pact’s “important strategic benefits,” saying it would allow Vietnam to “be less dependent on any one trading partner and enjoy broader ties with more partners, including the United States.”

“So we now have to get it done — for the sake of our economic prosperity and our national security,” he said.

Obama’s argument makes use of the political climate, pitting Donald Trump’s harsh criticism about China against Trump’s nationalist and anti-trade rhetoric, an odd political dance but one that congressional supporters of the deal have also embraced.

“You hear a lot of the rhetoric from the presidential candidates, that they want to create ‘Fortress America,’ they want to build walls,” said Rep. Ron Kind of Wisconsin, leader of a bloc of the trade pact’s Democratic supporters in Congress. “We can be at the table, shaping the rules of globalization or it will be done to us. And that’s really the decision we face.”

The most optimistic timeline in Congress appears to be for the deal to come to a vote in the lame duck session. Obama predicted recently lawmakers might vote after at least the primary election season had ended.

Not so fast, warned one Democratic leader.

“He has a more optimistic view of the [deal’s] chances than I do at the moment,” said Sen. Richard J. Durbin of Illinois, the minority whip, adding that the agreement “would have a difficult time passing the Senate” now.

“Anything can happen” in the lame-duck session after the November election, Durbin said. “But when I think of how many issues are being saved for the lame duck, you’re putting a lot of burden on those frail wings.”

Administration officials are heartened, though, by the fact that Democrats in particular who have supported the TPP so far have not suffered political consequences, despite a vow by labor groups last year to challenge them in primaries. Ten of the 28 Democrats who voted to support the preliminary “fast-track” legislation in June have already won primaries, all by significant margins or without any opposition at all. More than half of the remaining Democrats face no opposition in primaries to come.

“Until there’s a vote scheduled, it would not be surprising that many members will hedge their bets and stay neutral, or maybe nitpick certain provisions,” Kind said. “But I think when judged in its totality, that’s when reality comes home.”