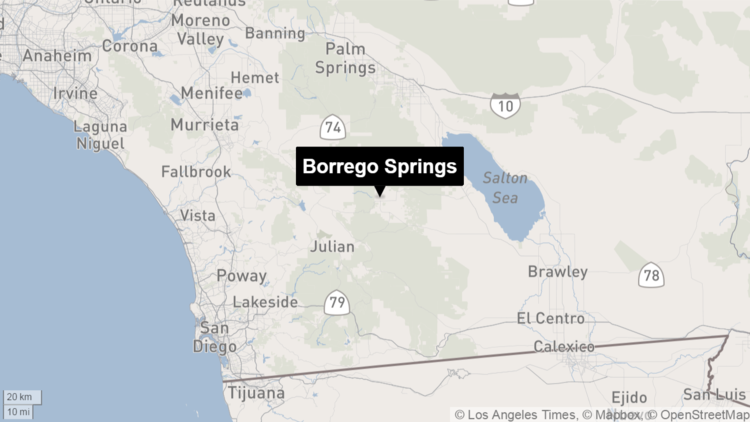 A shallow magnitude 5.2 earthquake was reported Friday morning 13 miles from Borrego Springs, according to the U.S. Geological Survey. The temblor occurred at 1:04 a.m. PDT time at a depth of 0.6 miles.

According to the USGS, the epicenter was 16 miles from La Quinta, 19 miles from Palm Desert and 20 miles from Rancho Mirage.

Borrego Springs is a community of about 3,000 people in eastern San Diego County, near the Imperial County line, but the quake was felt throughout the Southland. A Downey woman called KNX-AM (1070) and said it struck with “a soft roll,” then later “hit again stronger.” A caller from Costa Mesa described a “back and forth” sensation.

There were several aftershocks, including a magnitude 3.3 jolt 13 miles from Anza, Calif., at 1:46 a.m. at a depth of 6.8 miles. Anza is in southern Riverside County.

Seismologist Lucy Jones reported dozens of aftershocks on her Twitter feed. She said the Friday morning quake was near the San Jacinto fault, “historically the most active fault in Southern California.”

In the last 10 days, there have been two earthquakes of magnitude 3.0 or greater centered nearby.