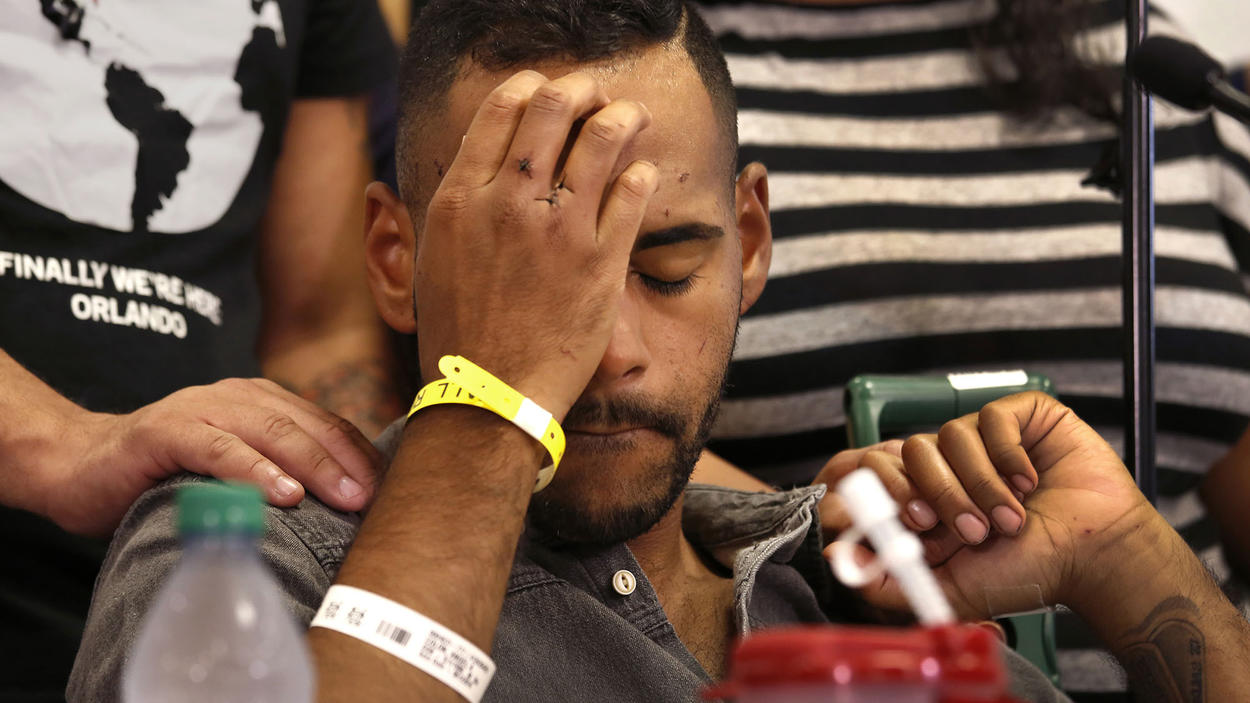 As the probe into the Orlando nightclub shooting broadened Tuesday, with investigators ranging as far afield as Afghanistan and Saudi Arabia, survivors recounted the gunman – whose parents are Afghan immigrants – telling them he had gone on a killing spree because he “wanted America to stop bombing his country.”

Those developments emerged as FBI officials revealed that Omar Mateen, who killed 49 people Sunday in the worst mass shooting in modern American history, had made repeated visits to Disney properties in Florida and may have had assistance from his wife in organizing the attack on the Pulse nightclub.

Investigators, meanwhile, are collecting data from at least two cellphones used by Mateen, as well as other electronic media and email accounts, a U.S. law enforcement official said.

So far, the official said, investigators have not encountered any data that has been encrypted, a major stumbling block in the FBI’s investigation of an iPhone used by the couple who killed 14 people at a holiday party in San Bernardino on Dec. 2.

The lack of encryption is expected to speed the widening investigation into why Mateen, a 29-year-old private security guard, opened fire with a semiautomatic rifle in the gay nightclub. He was killed later in a shootout with police.

There has been intense speculation about Mateen’s motives, ranging from Islamist extremism to sexual repression.

At a news conference Tuesday at Florida Hospital in Orlando, one survivor, Patience Carter, described cowering with two friends inside a handicapped bathroom stall at the club while Mateen stood nearby, chatting. Among other things, she said, he announced: “This is about my country.”

Mateen was born in New York to Afghan immigrants. Although he was a U.S. citizen, he appeared to be talking about Afghanistan.

“He said that the reason why he was doing this was he wanted America to stop bombing his country,” Carter said.

One person who might be able to shed light on what drove Mateen to such a horrific act is his widow, Noor Zahi Salman, who initially was reported to have refused to cooperate with law enforcement. However, a law enforcement official said Tuesday that Salman had begun talking to the FBI, which is looking into whether she helped him plan the rampage or scout out the Orlando nightclub, or knew about his plans in advance.

If Salman, Mateen’s second wife, knew about the plot and failed to alert law enforcement, she could face criminal charges for aiding and abetting the attacks, the official said, speaking on condition of anonymity to discuss the investigation.

Around 40 victims of the shooting remain in local hospitals, with many undergoing repeated surgeries.

He said he would be surprised if the death toll does not rise.

“This is the largest disaster that we probably could have imagined,” Cheatham said.

President Obama met with his national security team at the White House for a briefing on the investigation. He will visit Orlando on Thursday.

FBI officials think Mateen had visited Pulse and frequented other gay clubs in the past and had used a dating app on his phone to meet other men.

That has added an unexpected wrinkle to the case because Mateen called 911 during his rampage to pledge loyalty to the head of Islamic State, a terrorist group that executes homosexuals by throwing them off tall buildings.

Investigators also are seeking to determine whether Mateen scouted other possible targets.

Mateen had visited a number of Disney properties since April and most recently was spotted early this month in Disney Springs, an outdoor shopping and entertainment complex in Walt Disney World, according to a U.S. law enforcement official briefed on the investigation.

Another U.S. official said that information provided to the FBI by Disney made it clear that Mateen was not simply a tourist during a visit to Walt Disney World two or three months ago. U.S. officials say Mateen may have been casing the sites for a potential attack, but reaching a firm conclusion on that theory would be difficult.

It’s possible that Mateen’s visit overlapped with Gay Days Orlando, an annual event that brings thousands of gay, lesbian, bisexual and transgender people and their families to Central Florida. This year’s Gay Days ran from May 31 to June 6.

The organizers of Gay Days arrange some ticket packages at Disney parks during the weeklong event and designate parks to attend on certain days.

A top U.S. law enforcement official said the investigation has not found evidence that anyone helped Mateen plot the attack.

The investigation also has extended to Afghanistan, where Mateen’s parents were from, and to Saudi Arabia.

Mateen traveled to Mecca in Saudi Arabia for 10 days in March 2011 and for eight days in March 2012 to take part in the annual religious pilgrimage made by Muslims, a U.S. law enforcement official said.

In 2013, when the FBI launched a 10-month investigation of Mateen for possible terrorist ties, U.S. authorities asked Saudi intelligence officials about the two trips, officials said.

The Saudis had no evidence suggesting Mateen had held suspicious meetings while in the kingdom, or engaged in any other behavior that raised any alarms.

The day after a massive candlelight vigil in downtown Orlando, city officials were able to release the names of all 49 people killed — mostly Latinos in their 20s and 30s.

Orlando resident Nereida Perez, a 66-year-old retiree, said her cousin Llka Aroyo, 36, underwent surgery late Monday after being shot eight times in the attack. Doctors were cautiously optimistic, Perez said, though there were still bullets inside Aroyo’s body, near her heart.

Doctors said the volume of patients with severe gunshot wounds surpassed anything they had ever handled. Initially, it was thought many patients would succumb to those wounds, but most have stabilized, doctors said.

Many of the victims were originally from Puerto Rico, and four of the dead were from Mexico.

Mateen’s ex-wife, Sitora Yusufiy, was asked in a CNN interview whether he might have been gay, and she said she did not know. But, she said, he spoke as if he hated gays.

Kevin West, a regular at Pulse, told The Times that Mateen messaged him on and off for a year before the shooting, using the gay chat and dating app Jack’d.

At least four regular customers of Pulse told the Orlando Sentinel that they believed they had seen Mateen there before.

A former classmate recalled that Mateen seemed like a “regular dude” until the Sept. 11 attacks in 2001.

“At first, I was surprised … like, damn bro, I rode the bus with that kid,” said Robert Zirkle, 29, who attended Martin County High School in Stuart, Fla. “But then I got remembering and thinking … he was crazy then, but nobody connected the dots.

“He started acting crazy, joking around the fact that 9/11 happened, making plane noises on the school bus and pretending he was slamming into the building,” said Zirkle, who now lives in Johnston City, Tenn., where he is a manager at a McDonald’s.

“He was happy that Americans were dying. He made that very clear. I don’t know if he was always a Muslim radical, but he was excited, hyped up. We were all like, ‘What are you talking about?’”

Zirkle, who was a freshman at the time, said he and other students threatened Mateen to get him to stop. “We told him if he didn’t stop making noises, we were going to beat him up.”

“He was really out there,” he said of Mateen, who attended the Spectrum Alternative School in Stuart.

“He had no friends. He had people who were cordial with him or would ask him how he was doing. Only a few people spoke to him. I was one of the few who would. He was a Seinfeld kind of guy.”

Zirkle said he had not kept in touch with Mateen since high school and had mostly forgotten him until this weekend. On Sunday, he said, his memories were jogged as he and his former classmates gathered on Facebook chat to share stories of Mateen, along with his high school yearbook photo.

“If we knew this would happen, we would have stopped him a long time ago,” he said.

Mateen was investigated by the FBI in 2013 and 2014 after he told co-workers that he planned to kill people and wanted to die as a martyr in a police raid. He was removed from the FBI’s terrorist watch list in 2014 after investigators concluded he was full of bluster and not a real threat.

He was questioned again by the FBI after Moner Mohammad Abusalha joined Al Nusra Front, an Al Qaeda affiliate in Syria, and killed more than a dozen people in a truck bomb suicide attack in Syria in 2014.

The FBI concluded that Mateen and Moner attended the same mosque but knew each other only casually.