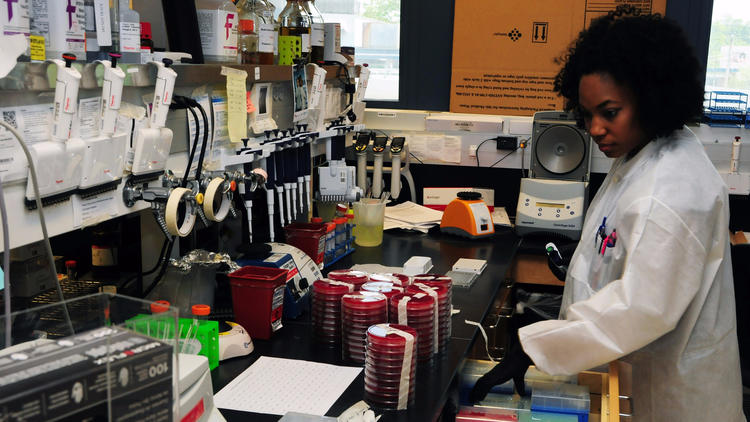 In early April, experts at a military lab outside Washington intensified their search for evidence that a dangerous new biological threat had penetrated the nation’s borders.

They didn’t have to hunt for long before they found it.

On May 18, a team working at the Walter Reed Army Institute of Research here had its first look at a sample of the bacterium Escherichia coli, taken from a 49-year-old woman in Pennsylvania. She had a urinary tract infection with a disconcerting knack for surviving the assaults of antibiotic medications. Her sample was one of six from across the country delivered to the lab of microbiologist Patrick McGann.

Within hours, a preliminary analysis deepened concern at the lab. Over the next several days, more sophisticated genetic sleuthing confirmed McGann’s worst fears.

There, in the bacterium’s DNA, was a gene dubbed mcr-1. Its presence made the pathogen impervious to the venerable antibiotic colistin. 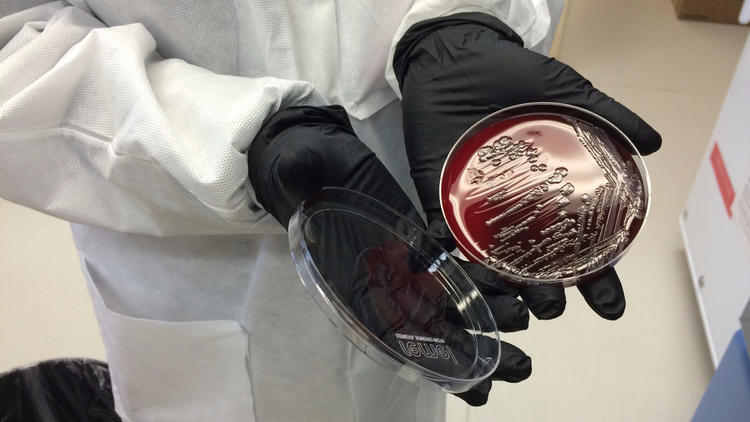 More ominously, the gene’s presence on a plasmid — a tiny mobile loop of DNA that can be readily snapped off and attached to other bacteria — suggested that it could readily jump to other E. coli bacteria, or to entirely different forms of disease-causing organisms. That would make them impervious to colistin as well.

It was a milestone public health officials have been anticipating for years. In a steady march, disease-causing microbes have evolved ways to evade the bulwark of medications used to treat bacterial infections. For a variety of those illnesses, only colistin continued to work every time. Now this last line of defense had been breached as well.

The golden age of antibiotics appears to be coming to an end, its demise hastened by a combination of medical, social and economic factors. For decades, these drugs made it easy for doctors to treat infections and injuries. Now, common ailments are regaining the power to kill.

Harvard University infectious disease epidemiologist William P. Hanage cautions that “we will not be flying back into the dark ages” overnight. Hospitals are improving their infection control, and public health experts are getting better at tracking new threats. But in a race against nature, he said, the humans are losing ground.

In 1928, British bacteriologist Alexander Fleming discovered that an errant penicillin mold growing in one of his petri dishes had the power to kill staphylococcus, a type of bacteria that causes pneumonia, skin infections and food poisoning. It took scientists, industrialists and the pressures of a world war to convert the mold into a mass-produced medicine, which was ready in time for troops to pack on D-Day.

More than 100 antibiotic compounds have been introduced since. But almost as soon as they were given to patients, scientists began finding evidence that disease-causing bacteria were developing resistance to these new wonder drugs.

Bacteria meet, mate, compete and evolve inside living bodies. When an antibiotic is added to the mix, only the strongest survive.

Humans have accelerated this natural process by indiscriminately prescribing antibiotics and by routinely feeding the drugs to livestock, scientists say. Multiply the number of humans and animals taking these drugs, and you multiply the opportunities for antibiotic-resistant strains to emerge.

Until very recently, few made the connection between antibiotic use in individual cases and the emergence of antibiotic resistance, said Dr. Susan Bleasdale, an infection-control expert at the University of Illinois in Chicago. Patients with earaches, sinus pressure and sore throats demanded antibiotics, and physicians tended to oblige.

The results have been deadly. Each year, more than 2 million people in the U.S. are infected with a bacterium that has become resistant to one or more antibiotic medication designed to kill it, according to the federal Centers for Disease Control and Prevention. At least 23,000 people die as a direct result of antibiotic-resistant infections, and many more die from other conditions that were complicated by an antibiotic-resistant infection, the agency says.

As medicines such as tetracycline, erythromycin and vancomycin lost much of their effectiveness, colistin continued to overwhelm trouble-making bacteria such as Salmonella, Klebsiella and E. coli.

Colistin is toxic to the human kidney, and doctors largely stopped using it in the 1970s when safer medications became available.  But now that so many antibiotics have lost their ability to vanquish E. coli and other bacterial invaders, colistin has become the only hope for some desperate patients.

The problem goes beyond treating infections. As bacterial resistance grows, Lesho said, “we’re all at risk of losing our access” to medical miracles we’ve come to take for granted: elective surgeries, joint replacements, organ transplants, cancer chemotherapies. These treatments give bacteria an opportunity to hitch a ride on a catheter or an unwashed hand and invade an already vulnerable patient.

The struggle to sustain the effectiveness of antibiotics is a never-ending arms race. If humankind were regularly finding new anti-microbial agents and turning them into medicines, there might be less cause for worry.

Researchers haven’t identified a new class of antibiotic medication since 1987. As a result, while bacteria have continuously evolved new ways to thwart antibiotics, the medicines have not gained new mechanisms to fight back.

The economics of drug development are partly to blame.

To offset the millions of dollars they pour into research, clinical trials and the FDA approval process, pharmaceutical companies aim to develop blockbuster drugs, said Dr. Anthony Fauci, director of the National Institute for Allergies and Infectious Diseases. An ideal candidate would be used by millions of people every day for the rest of their lives, like pills to keep cholesterol or blood pressure in check.

Antibiotics won’t pay the freight. They should be prescribed sparingly and only used for about a week. They could be rendered obsolete at any time by resistance genes. Worst of all, they compete in a field of inexpensive generics.

Without government policies that encourage investment in the antibiotics, “there’s very little incentive” for companies to do it themselves, Fauci said.

Other approaches can help. Under Fauci, the NIAID is funding the development of tests that would speed the diagnosis of infections and prompt more careful use of antibiotics by physicians and hospitals.

New vaccines to prevent bacterial infections are under study, and existing vaccines could be more widely used. The use of bacteria-killing viruses — an approach called phage therapy that revives an idea largely abandoned in the 1930s — is getting a second look.

The Pennsylvania patient whose infection was impervious to colistin was able to beat back the bacteria in her urinary tract with the help of other antibiotics. She survived.

Others have not been so lucky. Hospital patients infected by antibiotic-resistant bacteria are twice as likely to die as those infected by the non-resistant strains of the same bacteria, studies show.

Experts say it’s just a matter of time before other disease-causing bacteria pick up the fateful mcr-1 gene. Since its discovery was first reported in China in November 2015, it has spread to human, animal, food and environmental bacteria on every continent. A report published Monday in the journal Antimicrobial Agents and Chemotherapy found the gene in 19 samples of E. coli from around the world, including one from a patient in New York. Researchers are still investigating whether any of these samples contained the gene on an easy-to-spread plasmid.

“It’s not apocalyptic until it is,”  said Peter Pitts, president of the Center for Medicine in the Public Interest and former associate commissioner of the FDA. “Shame on us if we wait till bodies are in the street.”