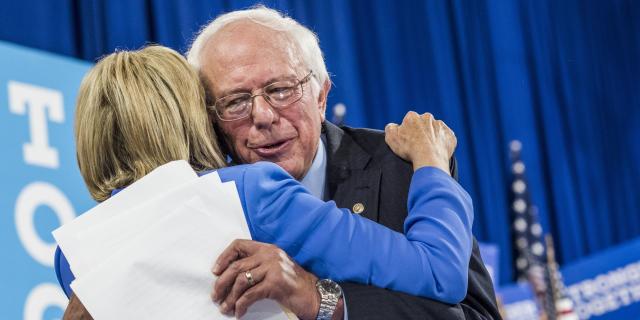 At this week’s Democratic National Convention in Philadelphia, Hillary Clinton is scheduled to accept her party’s nomination for president. But that doesn’t mean that every Democrat is on board.

Voters who backed Clinton’s closest rival, Senator Bernie Sanders, say the Democratic National Committee was biased in favor of Clinton the whole time. And they have new proof in the form of hacked emails released by Wikileaks. Those revelations led DNC Chairwoman Debbie Wasserman Schultz to announce she will resign at the end of the convention.

The Sunday before the convention began – and before Wasserman Schultz announced she would resign – hundreds of Sanders supporters rallied at Philadelphia’s City Hall, and then marched toward the site of the convention. Cosmopolitan.com talked to 12 protesters (and one politically active baby) at the rally to find out why they’re still supporting Sanders – and why they refuse to back Clinton in the general election. 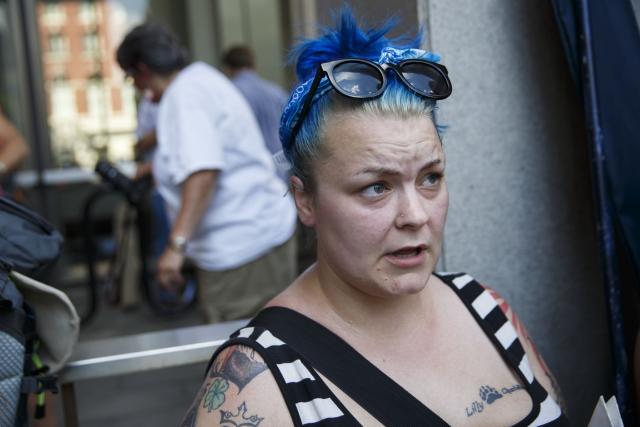 Why she’s here: “We’ve been planning since about April to come here. We’re actually part of the volunteer medics who will be marching this week. To be honest with you, our democracy is completely dead. After this week, we all knew it was happening, we knew the collusion was happening, and this is proof. This just solidifies the reason why we need to be here.”

How she’s voting: “We were at that rally where Bernie endorsed Hillary in Portsmouth. We didn’t even make it in the building. We all walked off. A mass of people walked out after he endorsed, and that’s what we’re going to do. We’re going Jill, not Hill. I will go Green after this.” 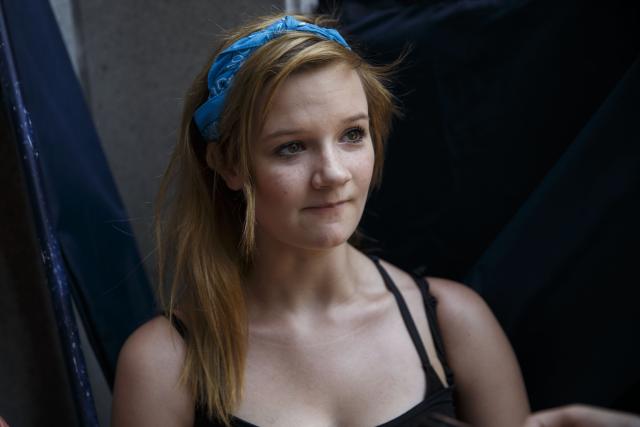 Why she’s here: “Right now, since I just joined the National Guard and the military, I want to make sure that in the future, we’re going to have more respect for our vets. I feel like the country is so divided right now because of [the election]. But as soon as you put on a uniform, everyone is the same. We need to act like it, and not keep separating ourselves based on identity, races, and skin tones.”

How she’s voting: Kaitlyn won’t turn 18 before Election Day but supports Green Party candidate Jill Stein. “If you decide to vote for the Green Party, it’s still taking away a vote away from both Hillary and Trump. Stick up for what you believe in. It’s time to start a change.” 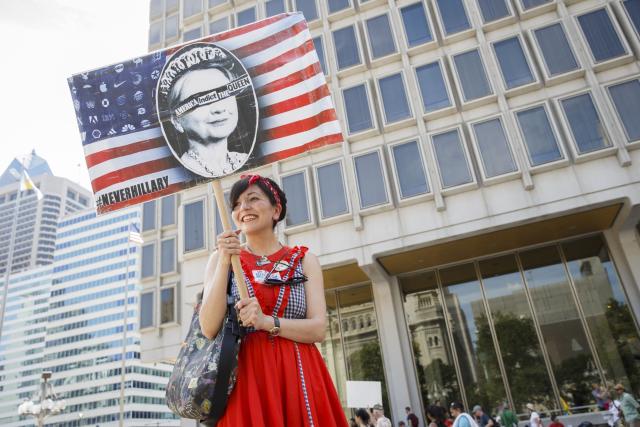 Why she’s here: “Well, they just fucked it up by putting Kaine as the VP. I believe Hillary’s only point for putting him in power or as her VP is essentially to sway the Republican voters who are not pro-Trump. She’s not going to get the progressive voter, but what she might get are the disenfranchised Republicans. And, you know, she’s playing her own chess game just like every other politician is. And that’s the choice she made, and I think any slim chance she had to garner my interest she lost by not picking Elizabeth Warren.”

How she’s voting: “I’ll vote for Jill Stein most likely, if Bernie’s not on the ballot. I vote with my conscience and I vote from my heart and I work for my fellow man. If the only argument you could make for a vote against Hillary is a vote for Trump, then all I can say to that is can you come up with a pro-Hillary argument without mentioning Trump.” 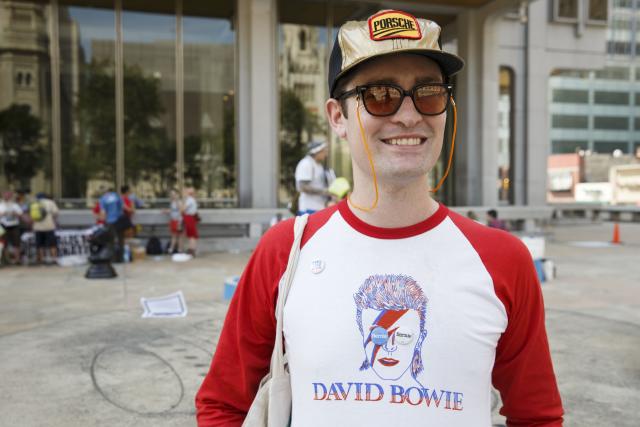 Why he’s here: “We’re here to support Bernie and the progressive movement. Frankly, I feel that science is always something that’s going to dictate what I believe, and unfortunately science is yelling at us to do something about climate change. And that’s what I’m most passionate about, but also social issues. I’m tired of seeing so many poor and disenfranchised folks, and it’s just not sustainable to have.” 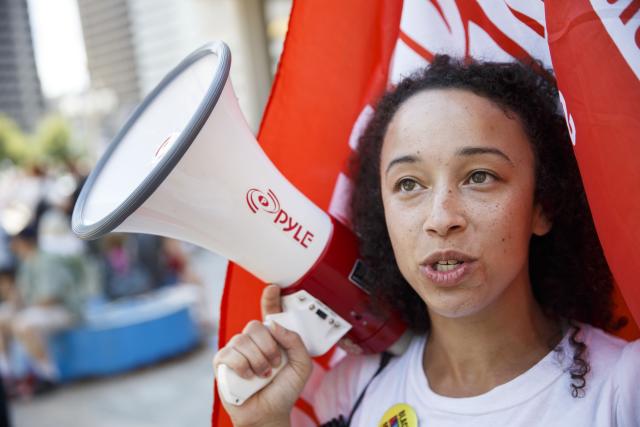 How she’s voting: “Jill Stein has beliefs that are directly aligned with my socialist beliefs. So, Jill Stein is not willing to back down, she’s not willing to endorse Hillary like Bernie did. I was very disappointed in that decision even though [Stein] opened her ticket up to him. He could have joined her ticket and become the Green Party presidential nominee – instead he chose to stick it out. I’m hoping he has a wild card up his sleeve at the convention, but I highly doubt it.” 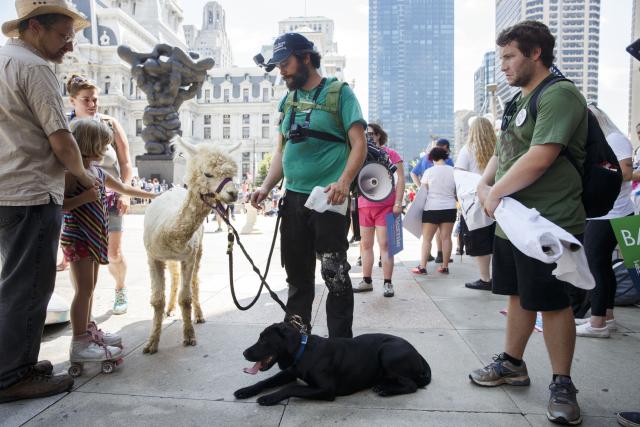 Ethan the Farmer, 40, “I travel the United States. I don’t live in a permanent spot; I live in a tiny house.”

Why he’s here: “What the government’s doing to our farms, food, families, and freedom is out of control. And our best shot at having somebody who wasn’t necessarily in corporations’ pocket like Hillary and Trump are was Bernie. I’m hoping that the government will eventually acknowledge the fourth branch of government, which is we, the people, and actually do something.”

How he’ll vote: “I’ll be writing somebody’s name in, and it will probably be Bernie. It probably won’t be anybody on the ticket. You give me those two options, you’ve got tyranny and tyranny.” 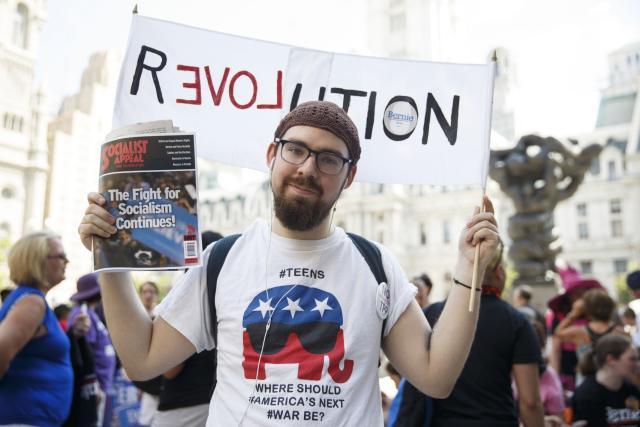 Why he’s here: “It’s very clear to me that a moment has been lost. [There was] an enormous opportunity for the American left to put its best foot forward in opposition to an actual fascist and a racist. And instead of embracing that opportunity and nominating someone with actual leftist politics and actual principles, the DNC has elected to keep the status quo and keep the safe money and the safe inherent power structures. So it’s hopefully it’s clear that we’re not going to stand for that.”

How he’ll vote: “If I don’t abstain from voting, which I believe is every American’s right, I think my moral compromise will be to vote for Jill Stein, as maybe a protest vote, to say this is the direction America should be going. So even if this is not a perfect platform or a perfect candidate, this is what Americans should be interested in and have the opportunity to hear more from.” 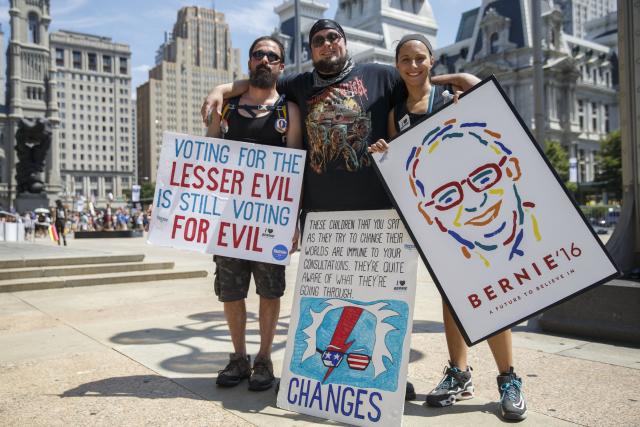 John: “We feel like Bernie’s gotten the short end of the stick. The political process is pretty broken. And that’s being proven more and more with all the Wikileaks documents that have been released. So it’s been a stacked card against him and he still did incredibly well. It’s a contested convention, and there’s been no concession. So let’s see what happens.”

Angela: “It’s unfair and they’re not doing the whole process right. He has so many supporters that aren’t getting a fair shake.”

John: “I’m hoping to see America let the convention be able to vote for Bernie, but again, I’m going vote for my conscience and [for] Jill Stein. [Otherwise], it’s giving us the choice between which turd is the shiniest.”

Matt: “Just because I’m going to exit the Democratic Party doesn’t mean that I won’t support Bernie and his views. He’s strategically placing himself where he’d be most beneficial.” 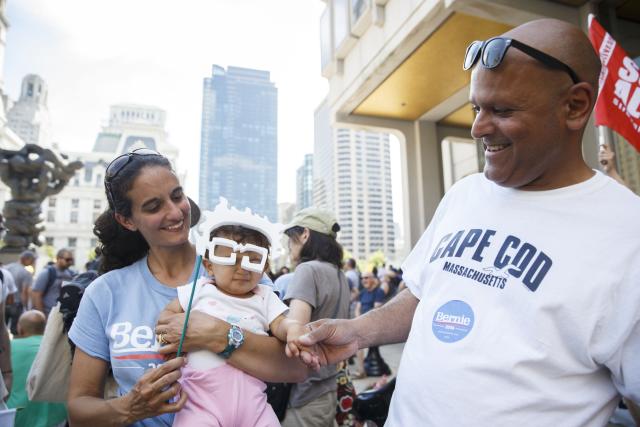 David: “It’s time that there’s a candidate who understands the people, who is like-minded, has the same heart, and who’s going to bring a positive change for America. Who’s not concerned about money but more in helping the world, the earth.”

Linda: “The more I learn about Jill Stein, the more I love her, and I think that we need somebody like her. She’s very smart, she’s got political experience, she’s run for governor and lots of things, and she’s a doctor too. She’s just an amazing candidate,