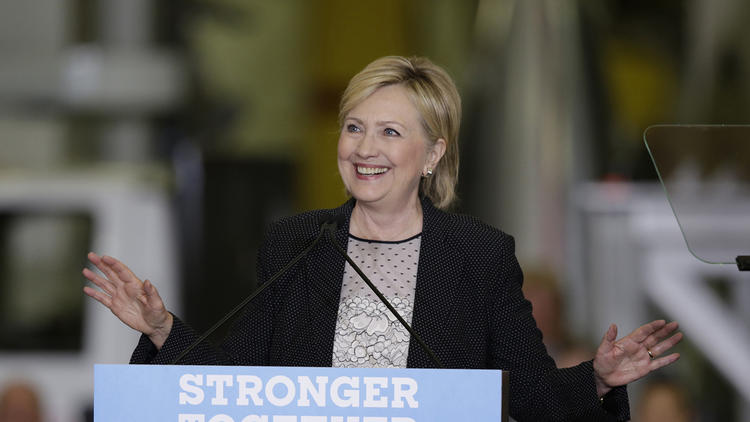 On a day in which Clinton was hoping to inflict considerable damage on Donald Trump — this time, by ripping into his economic agenda — her campaign was on the defensive, scurrying to clean up the latest damaging revelations in years-old messages that were sent by Clinton and her staff and released as the result of a lawsuit.

The ongoing email dispute undermined the potency of a speech for which Clinton’s campaign had been laying groundwork all week, one in which she presented her economic agenda in full and tried to brand her self-styled populist rival a fraud.

Clinton, speaking in Michigan, did manage to deliver a combative, policy-laden address that effectively rebutted the economic plan that Trump presented in the battleground state days before.  Both are reaching out to the so-called Reagan Democrats who will decide the race’s outcome in the Rust Belt.

But Clinton and Trump continue to be distracted by self-inflicted wounds. Trump’s economic address was overshadowed by his suggestion soon after that maybe gun rights proponents would find a way to stop Clinton from appointing certain judges, which earned him widespread rebuke for casually inciting violence. Then, in unrelated and repeated comments, the Republican bizarrely repeatedly accused President Obama and Clinton of founding the Islamic State terrorist group.

But Clinton, too, has had difficulty staying on task. The fresh batch of emails was pried from the State Department thanks to a lawsuit filed by the conservative advocacy group Judicial Watch. It revealed what appeared to be seedy dealings by Clinton’s team at the agency.

In one message, a top Clinton aide appears to be trying to get a million-dollar donor from the family’s Clinton Foundation access to the U.S. ambassador to Lebanon, after an executive at the foundation requested it. In another, the foundation executive appeared to request special help finding a job for an associate, and he was assured that the right people knew of the potential employee.

The emails are not devastating, but they are damaging as Clinton struggles to boost her trustworthiness with voters. And such messages will continue to surface until the election. The State Department is being forced to release more documents as a result of government investigations and lawsuits like the one filed by Judicial Watch.

And Democrats are particularly anxious about fresh FBI concerns that the Russian hackers who penetrated servers at the Democratic National Committee may have also breached private email accounts of many more key members of the party, including those with the Clinton campaign. The hackers who breached the DNC server used it as a springboard to access the accounts of at least some individuals associated with the party, and the list of victims could number in the dozens, a U.S. law enforcement official confirmed Thursday.

As the headwinds of distraction grew, Clinton worked to refocus voter attention Thursday on the economy.

“There is a myth out there that he will stick it to the rich and powerful because somehow he is really on the side of the little guy,” Clinton said of Trump during her address in Warren, Mich. “Don’t believe it.”

The speech, at a facility where aerospace parts are manufactured, was equal measure one-liners targeted at Trump and heady policy prescriptions. The Democratic nominee positioned herself as the child of a small-business owner who printed designs on draperies and struggled to provide a better life for his family.

She questioned what might have happened to her family if her father had done business with a man like Trump, whose companies have been accused by scores of contractors of refusing to pay for work they did.

She said Trump’s economic plan would also break his promise to workers, warning it would enrich only corporations and Trump himself.

Clinton called it “just a more extreme version of the failed theory of trickle-down economics, with his own addition of outlandish Trumpian ideas that even Republicans reject.”

Trump’s childcare plan, Clinton said, would help rich people like him afford nannies while doing nothing for those at the bottom of the income scale. She warned that the repeal of the estate tax Trump promises would net his family as much as $4 billion while providing no benefit to 99.8% of Americans. Another provision Trump wants got labeled by Clinton the “Trump loophole,” because she said it could cut the income tax rate for many of his companies in half.

She said Trump would roll back the tough rules placed on the financial industry in the wake of the mortgage crisis and usher in trillions of dollars “in tax cuts to big corporations, millionaires and Wall Street money managers that would explode our national debt.”

Caption The ultimate side-by-side convention comparison of Clinton and Trump on the issues
Caption Who is Hillary Clinton’s running mate Tim Kaine?

Clinton contrasted the Trump plan with her proposal to make the rich pay more and expand the role of government. She laid out her familiar progressive agenda that included vows to launch the biggest infrastructure spending program since World War II, expand Obamacare, make public college debt-free and penalize firms that move their operations abroad.

In a part of the country where her past support for free-trade deals has become a political liability, Clinton also made a forceful vow to stop deals that are not in the interest of U.S. workers, part of a concerted effort to re-frame the trade debate and to defend herself against accusations that she might renege her stand against the massive Trans-Pacific Partnership pact.

“Mr. Trump may talk a big game on trade, but his approach is based on fear, not strength,” Clinton said. “Fear that we can’t compete with the rest of the world even when rules are fair, fear that our country has no choice but to hide behind walls.”

“Before he tweets how about he is really the one who is going to put America first in trade,” Clinton said, “let’s remember where Trump makes many of his own products, because it sure is not America.”