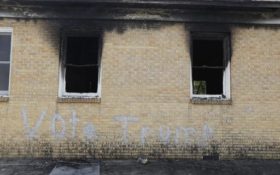 Still don’t think the mainstream media has an agenda? You’ll change your mind after this.

Turns out that horrible arson attack on a black church linked to President-elect Donald Trump in November? It was yet ANOTHER in a wave of race-baiting hoaxes committed by Democrats.

The attack was caused by one of the churches own African-American parishioners, who was trying to link the attack to Trump supporters.

But it’s too late. The damage is already done, because the horrendous incident was jumped on by mainstream media outlets as evidence of the racism of Trump supporters.

For example, The New York Times — in reporting the original arson — made a point to imply blame lay at the feet of the Trump campaign, saying the arson “follows months of racially charged campaign speech from Donald J. Trump,” and that his campaign “has garnered the support of many white supremacists and white nationalists.”

This isn’t the only post-election hate crime hoax uncovered Wednesday. “A University of Michigan student who told police in November that a man threatened to set her hijab on fire could face charges after investigators discovered she fabricated the entire story, police announced Wednesday,” according to The Detroit Free Press.

In fact, just about every hate crime the mainstream media gleefully linked to the Trump campaign after the election has been proven false once investigated by police.

Don’t take our word for it, of course. The list is comprehensive — alleged hate crime after phony hate crime are reported by the mainstream media and then found to be hoaxes.

Right there, 18 incidents of faked hate crimes — all found with a simple Google search. All of which the mainstream media pushed as proof of Trump supporters were racist and deplorable, and then conveniently ignored once the truth came out — that every single one of them were hoaxes committed by liberals to further divide America.

Where’s the outrage? Where’s the front page stories on The Washington Post and New York Times about the rash of false accusations against Trump voters?

Go ahead, look. We’ll wait… but to save you the time, we’ll give you a hint: They don’t exist.

And that proves the mainstream media is pushing a narrative. They want America to turn against Trump.