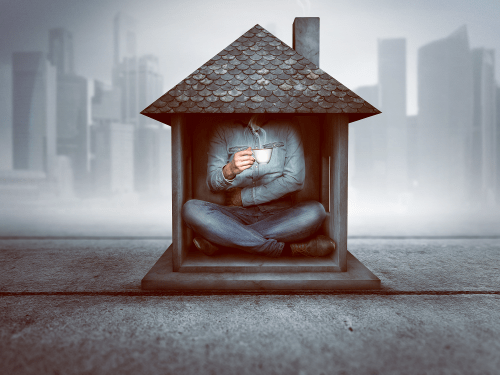 The explosion of housing costs is one of the greatest economic crises in the developed world. From San Francisco and New York to London and Vancouver, the average worker’s paycheck is being devoured by the cost of rent. This daunting financial barrier is putting people on the streets, and preventing the next generation from raising families and entering the middle class.

For people who live in these cities, there’s really only one thing they can do. Their only option is to look for a smaller apartment, even if it’s tragically tiny. That’s what’s happening in Hong Kong, a city that now has the most unaffordable housing market in the world. Over 200,000 of the city’s poorest residents are forced to live in subdivided apartments, many of which are so small they’ve been dubbed “coffin homes” according to the Daily Mail. Take a look at what it’s like to live in one of these hovels.

A coffin apartment like that can cost over $300. But in many cases, subdivided apartments that are only a little bigger than that, are home to entire families.

Single mother Li Suet-wen said she struggled to explain to her son, 6, and daughter, 8, why they live in a 120-square-foot one-room ‘shoebox’ cubicle.

‘Why do we always have to live in such small flats? Why can’t we live in a bigger place?’

Homes like that are so common in Hong Kong, that the UN has called the situation “an insult to human dignity.” And that’s exactly what it is, because this didn’t have to happen. Only 7% of Hong Kong’s land is designated for housing. However, Hong Kong isn’t the only city where we’re beginning to see these ridiculously tiny apartments.

In every city where there is a housing crisis, you’ll often find that there are zoning laws, city councils, environmentalists, and homeowners who are all preventing real estate developers from building more homes. And when that happens, people in lower income brackets have no choice but to pay a fortune to live in miniature apartments. Sadly, this is happening in America too.

The San Francisco Bay Area for instance, has become notorious for these types of living arrangements. In Oakland, you can rent a shipping container for $1,000 per month, and one 25-year-old man built an 8 by 3.5 foot wooden box, which he placed in a San Francisco apartment and paid $400 a month to live in. The worst example is this crawlspace, which two San Francisco residents tried to rent out for $500 a month.

We Aren’t going to sugar coat this, as you can see by the photos, this is a basement crawl space and the ground is un-even. My roommate Neil has agreed to help out and level off the dirt crawl floor and we have some scraps of rug to throw down.

There is a decent amount of room for a mattress and night stand and you can keep a dresser in the garage. You will be able to run an extension cord into the crawl space for light and the garage provides decent heat for those chilly SF nights or feel free to bring in a space heater.

Since you’ll have access to our bathroom and kitchen, we don’t want any slobs! It would be great if you were also in tech so that we can talk shop but that is not a deal breaker, perhaps you are a founder still looking to get that seed round and this is all you can afford!

Of course, in many cases these living arrangements aren’t officially sanctioned by the government. In New York City however, a series of micro-apartments was approved and built recently, all of which measured between 260 and 360 square feet, and cost between $2000 and $3000 a month.

This is a trend that should not be ignored. These high density apartments, which could become commonplace in the near future, fit right into the Agenda 21 plan to corral everyone into extremely densely populated cities.

Like it or not, this is what the elites in every developed nation have planned for us. They want us to spend a fortune to live shoulder to shoulder, so that they can increase the tax bases of their cities, and make us easier to control and more dependent. More importantly, they love the idea of forcing us into tight spaces, because it encourages communal behaviour rather than independence. Because of that, the development these micro-apartments and coffin homes should be resisted at every turn.

One thought on “Welcome to Your Agenda 21 Apartment: Thousands of Hong Kong Residents Forced to Live in Subdivided “Coffin Homes””