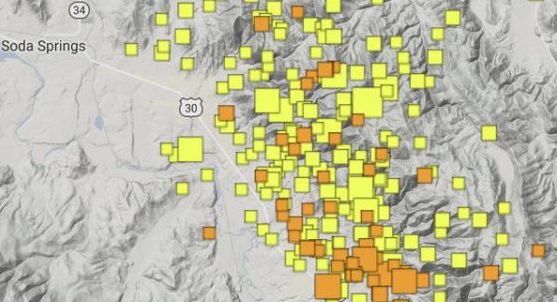 An earthquake swarm in south eastern Idaho is rattling windows across parts of the state and Wyoming and Utah.  There have now been over 260 earthquakes since September 2, in the Soda Springs area and many have been over a magnitude of four or even higher on the scale.

The earthquake swarm in Southeast Idaho looked like it might be ending or at least slowing down on Thursday and Friday. But then Saturday arrived and by the day’s end, 19 quakes had struck. There have been 34 more temblors so far Sunday, bringing the earthquake total since the swarm began on Sept. 2 to 204 quakes. All of the quakes have occurred in the Caribou County area east, southeast and northeast of Soda Springs.

While many believe California and the West Coast are ripe for a huge earthquake, the heartland is often forgotten and these earthquakes are being swept under the rug and largely unimportant to the public at large.

While all eyes are on California’s San Andreas Fault because of the density of the human population there, many haven’t noticed Idaho’s swarm and the area which is highly active right now. Earthquake experts claim that the swarm in Idaho could end in a worst case scenario: a 7-magnitude quake that would reduce some buildings and homes to rubble and kill dozens or more – but the chances of that are incredibly small.

Dr. David Pearson, an Idaho State University geologist who studies earthquakes, said scientists who have researched some of the faults in Southeast Idaho have concluded that the 7.0 quake is possible at some point in the region’s future, but the current earthquake swarm is not necessarily an indication that it will occur anytime soon. Pearson said the faults in Southeast Idaho that produce earthquakes have not been extensively studied and this makes it difficult to determine when a destructive 7.0 earthquake could occur. –Idaho State Journal

The current earthquake swarm began on the night of Sept. 2 when 34 quakes occurred. Those were followed by another 34 quakes last Sunday, 28 on Monday, 20 on Tuesday, 25 on Wednesday, five on Thursday, five on Friday, 19 on Saturday and 34 so far Sunday. There was even a 4.5 magnitude quake in that area this morning, and people have reported feeling that quake as far away as Jackson, Wyoming.  All 260 plus of the quakes were reported by University of Utah Seismograph Stations.

Thus far, the most powerful temblor in the swarm was the second quake to occur. It was a 5.3 magnitude earthquake and struck at 5:56 p.m. September 2.

Series of earthquakes have occurred in SE Idaho this afternoon. The largest, a 5.3 magnitude, was felt in Cache Valley: pic.twitter.com/76OxF9PRe2

Authorities say it’s been years since Southeast Idaho experienced a quake of 5.0 magnitude or greater. Such quakes can cause damage to houses and other buildings, but fortunately, this was not the case. By comparison, a 7.0 magnitude quake would be at least 50 times bigger than the 5.3 magnitude temblor that hit Southeast Idaho last weekend.

The U.S. Geological Survey said that a 7.0 magnitude quake will inflict “considerable damage” to ordinary houses and buildings and will cause such structures to partially collapse. Such temblors will also cause chimneys, factory smoke stacks and walls to collapse, according to the USGA.

Of course, the swarm of earthquakes in Idaho isn’t limiting fears to a larger local quake.  Many are afraid that these swarms could trigger the Yellowstone super volcano’s eruption, as the caldera just northeast of the Soda Springs area, a mere 170 miles away. While it has been over 600,000 years since the last eruption, some seismologists are concerned the recent swarm of earthquakes may be sending warning signs the supervolcano is ready to explode once again.

“When a volcano starts ‘acting up’ prior to an eruption, one of the typical signs is increased seismicity,” research professor at University of Utah Jamie Farrell told Newsweek. Should the Yellowstone supervolcano erupt, thousands of people would die instantly from the explosion.

While an earthquake in Califonia could devastate the West Coast, a Yellowstone eruption has the potential to be a world wide extinction level event. Soda Springs, Idaho’s proximity to Yellowstone is hardly comforting.