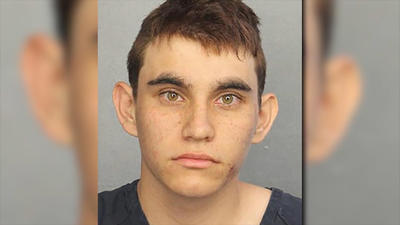 Nikolas Cruz cut his arms on Snapchat and said he wanted to buy a gun in September 2016, more than a year before he was accused of killing 17 people in a school in Parkland, Florida, records obtained by the South Florida Sun Sentinel show.

The incident on the digital social network prompted an investigation by sheriff’s deputies and adult welfare investigators from the Department of Children & Family Services.

The documents provide further evidence that Cruz was a troubled teen who repeatedly went without help before he stalked the halls of Marjory Stoneman Douglas High School with an AR-15 rifle on Wednesday.

In another stunning example, the FBI acknowledged Friday that it ignored a tip last month that Cruz was at risk of committing a school shooting.

A person close to Cruz contacted an FBI national tipline on Jan. 5 with concerns about the young man’s “gun ownership, desire to kill people, erratic behavior, and disturbing social media posts, as well as the potential of him conducting a school shooting,” the agency said in a news release.

The information should have been sent to the FBI Miami Field Office but was never forwarded, officials said. Attorney General Jeff Sessions on Friday ordered an investigation of how the U.S. Department of Justice and FBI handled the matter.

“Mr. Cruz has fresh cuts on both his arms. Mr. Cruz stated he plans to go out and buy a gun. It is unknown what he is buying the gun for,” the DCF report reads.

Investigators concluded there were “some implications” for Cruz’s safety but determined he was receiving adequate support from his school and outpatient care from Henderson Mental Health in Broward County.

About five months later, he bought the AR-15.

Cruz came under DCF’s supervision and care because he was classified as a vulnerable adult due to mental illness.

“[Cruz’s] final level of risk is low as [he] resides with his mother, attends school and receives counseling through Henderson,” the DCF investigator wrote.

Cruz’s lawyers said the report is the clearest evidence yet that the system failed not only their client but also the murder victims, their families and the wider community.

“All of this could have been prevented,” said Melisa McNeill, the Broward assistant public defender who is leading the defense. “It makes me sick to my stomach because there are 17 people, including numerous children, who are dead and several others who are injured.”

The attorneys said the Snapchat incident alerted at least four local agencies — DCF, the Broward Sheriff’s Office, the Broward school district and Henderson Behavioral Health, one of the largest mental health providers in the county — that Cruz was in crisis and posed a potential danger to himself and others.

“Every single red flag was being thrown up by this kid, four days after his 18th birthday, and nothing was done to help him,” said Chief Assistant Public Defender Gordon Weekes. “This community has been devastated. The system didn’t only fail him, it failed the entire community.”

A mobile crisis unit from Henderson had been called out at some time in the past to figure out whether Cruz needed to be committed for psychiatric treatment under the Baker Act, the DCF report said. No date for that visit was provided and he was not committed.

His mother, Lynda Cruz, told investigators that her son had been diagnosed with autism and attention deficit hyperactivity disorder. He was being treated for depression, had a behavioral disorder and had been taking medication for the ADHD, the report said. Investigators wrote that they did not know whether he was still taking the medication.

Cruz’s mother told investigators his behavior was linked to “a breakup with a girl who was cheating on [him].” She and the girl’s mom had told the teens they “had to end the relationship because it was unhealthy for everyone.”

Cruz began cutting himself after his relationship broke up, his mother said.

She said her son did not have a firearm. She said she had confiscated his air gun because he didn’t follow house rules about only shooting it “within the backyard and at targets.” It was unclear precisely what he was doing.

Cruz had “hate signs” — including a Nazi symbol and the words “I hate N——” — drawn on his book bag at some point in the past, according to his mother and a counselor. His mother told investigators that she made her son remove the symbols and that their family was not racist.

A counselor told investigators that a mobile crisis unit had been called out to the school “and determined he was not at risk to harm himself or others.” Cruz had gotten into a fight with a boy over a girl, the counselor said.

The team from Henderson found Cruz “stable enough not to be hospitalized.”

The school resource officer, a sheriff’s deputy, refused to share any information with the investigator “regarding the incident that took place” with Cruz but confirmed that Henderson staff came to the school, assessed Cruz and did not hospitalize him.

In a statement emailed Friday, a DCF spokeswoman wrote: “Based on the information at this time, this individual had no involvement with Florida’s child welfare system, including foster care.”

“Other information related to this individual as an adult is confidential. … According to Florida law, a court must order the release of these records. In the spirit of full transparency, the department has petitioned the court to be allowed to release any and all records we have on this individual,” Jessica K. Sims wrote.

The FBI tipster was at least the second to warn the agency about Cruz. A video blogger in Mississippi revealed this week that he alerted the FBI four months earlier, in September, when a commenter named Nikolas Cruz wrote “I’m going to be a professional school shooter” on YouTube.

In that case, Robert Lasky, the FBI special agent in charge of the South Florida district, said the tip was pursued but the agency couldn’t track down the commenter and did not connect it to South Florida. The agency’s office in Jackson., Miss., interviewed the person who called, YouTube user Ben Bennight, 36, about it, and checked an internal database and other sources.

Lasky said Friday that agency officials made efforts to notify the families of those who died before making the news public.

“The potential of the FBI to miss something is always there,” Lasky said.

Broward Sheriff Scott Israel said Friday that the Sheriff’s Office was reviewing roughly 20 calls to the agency over the last few years that may have involved Cruz.

“If we find out — like in any investigation — that one of our deputies or call takers could have done something better or was remiss, I’ll handle it accordingly.”

Not all calls resulted in a response by deputies, Israel said.

“At the end of the day, make no mistake about it America, the only one to blame for this incident is the killer himself.”