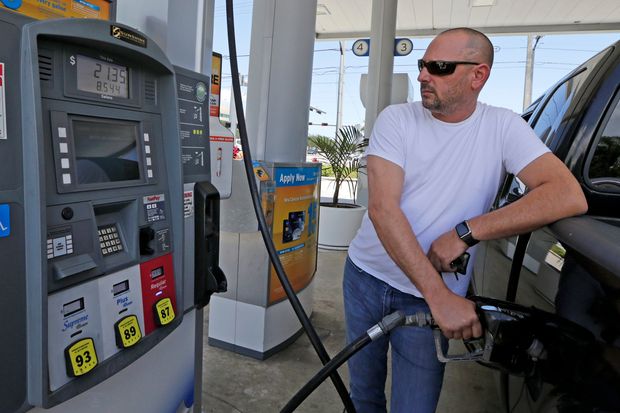 Americans are spending more at the pump than they have in years. Prices could rise even higher just as drivers hit the road for family vacations.

“This summer, in terms of average gas prices, will likely be the highest since 2014,” said Patrick DeHaan, petroleum analyst at GasBuddy, a fuel-tracking app. “There’s been very little question about that.”

While higher fuel prices could herald an end to the glut that has plagued the energy market since 2014, they also threaten to dampen demand and hit consumers in their pocketbooks.

Since the Organization of the Petroleum Exporting Countries and other major oil producers, including Russia, agreed to collectively limit output two years ago, U.S. oil futures have risen about 40%, closing at $62.06 a barrel on Friday. Gasoline futures are up 8.6% this year.

“What we’re seeing now at the pump is reflective of OPEC’s decision in 2016 to cut back on oil production,” said Mr. DeHaan.

Part of gasoline’s price increase has also been seasonal, as refiners tend to process less crude oil into fuel during maintenance and are starting to transition to summer-grade gasoline, which is more expensive to make. Prices will likely climb further as the weather warms and driving picks up, according to energy analysts.

OPEC’s production cuts have helped offset growing output from U.S. shale, which has repeatedly reached new record weekly highs this year. In January, U.S. crude stockpiles fell to the lowest level since 2015, and are below the five-year average, a closely watched measure of excess supply. Analysts expect global crude inventories to fall to their five-year average this year as well. Gasoline stockpiles have fallen for five consecutive weeks, according to EIA data ended March 30.

In recent months, the U.S. has also exported record amounts of gasoline, mostly to Latin and South America. In January, exports totaled more than 33 million barrels, near an all-time monthly high set in November.

“That’s a big difference from a decade ago, or even a few years ago,” said Tom Kloza, global head of energy analysis at the Oil Price Information Service. “We’re kind of refiners to the entire Western Hemisphere right now.”

In an April note, Goldman Sachs analysts said January oil demand exceeded expectations by 1 million barrels a day, mainly on the back of strong gasoline and distillate demand growth. According to the report, gasoline demand was up 2.8% compared with last January, despite several winter storms that could have crimped the need for gas.

But gas consumption could take a hit if economic growth slows, analysts said. Global markets have been rattled in recent weeks by tariffs lobbed back and forth between the U.S. and China, stoking concern that an escalation could lead to an all-out trade war between the two countries.

“The rise of the use of the word ‘staycation’ is probably going to happen this summer. You may start to see some people that are turned off to higher prices,” said Mr. DeHaan.

Still, analysts are skeptical that the recent rally is enough to make a sizable impact on the U.S. economy. While gas prices will be higher than years prior, they are still a far cry from 2014, when average prices were as high as $3.70 a gallon.

“Employment rates are very favorable, incomes are rising,“ said Robert Campbell, an analyst at Energy Aspects. Gasoline prices “are not at the point where we think it starts to push demand over.”