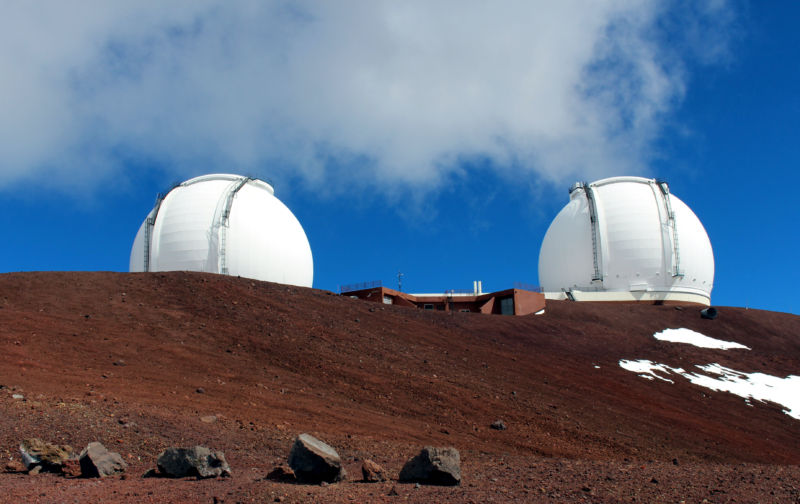 The giant volcanoes of Hawaii’s Big Island held a special place for the Polynesians who first settled there, with the peak of Mauna Kea being reserved for that society’s elite. But in recent years, they’ve become home to a new kind of elite: some of the best telescopes humanity has designed. For the past several years, those legacies have clashed through a mix of protests, hearings, and legal maneuvers.

Scientists wanted to build one of our next-generation giant telescopes on Mauna Kea and received approval from the state to do so. But native Hawaiians and their supporters, disturbed by the ever-growing population of observatories and poor past stewardship of the mountain, protested and appealed. Now, the state’s Supreme Court has issued what appears to be a comprehensive ruling that upholds the latest construction approval from the Board of Land and Natural Resources. This appears to clear the last hurdle astronomers faced before starting construction.

Scientists have been building telescopes with state approval on top of Mauna Kea for decades, despite its significance to the Polynesians who first settled the islands. Over time, however, three trends set the stage for the current controversy. One was that a telescope, once built, tended not to come down, and the people doing the building didn’t always plan to keep the hardware unobtrusive or minimize the environmental damages of construction. At the same time, cultural awareness among those who could trace their ancestry to the first Hawaiians increased, as did our knowledge of their political and religious practices. Work on Mauna Kea identified many shrines and features that are of cultural and/or religious significance.

When the Hawaiian Board of Land and Natural Resources approved the construction of the Thirty Meter Telescope, it set off extensive protests. (These included building of some new offering sites in the path of the planned construction; Wednesday’s ruling declared those irrelevant to the approval process.) But the telescope also saw a lawsuit that ended with the Hawaiian Supreme Court declaring the approval process flawed and sending matters back to the Board of Land and Natural Resources.

The original agreement had already placed the scope a distance from known cultural sites and minimized its visibility from key areas on the summit. The new agreement between the board and astronomers made some significant additions. More money would be spent on programs, including scholarships, that involve the local community. Three older telescopes on the mountain would be removed, and a closed access road would undergo rehabilitation to return the area to its prior state. Another two telescopes would be slated for closure before 2034. The agreement, and the studies that supported it, were approved by a retired judge who was brought in to adjudicate the issue.

The changes weren’t enough to satisfy the telescope’s opponents, who sued on a variety of grounds in a case that ultimately prompted Wednesday’s Supreme Court decision. These ranged from whether the original annexation of Hawaii was constitutional (and thus the state government valid) to whether the retired judge’s family membership to a planetarium constituted a conflict of interest.

Many of these issues were handled succinctly. As the retired judge had no decision-making power at the planetarium, her family’s membership (which she dropped in response to complaints) was ruled not to be a conflict of interest. And the state court is bound by the federal Supreme Court’s decisions, which have treated Hawaii’s state government as valid. Many other issues were handled by noting that the decisions made by the Board of Land and Natural Resources weren’t legally unreasonable and therefore not subject to reversal by the court.

The crux of the decision, however, comes down to whether the Board of Land and Natural Resources had considered all the proper factors in making its decision to approve the latest agreement. These had been laid out in a past Supreme Court decision that sought to “help ensure the enforcement of traditional and customary Native Hawaiian rights while reasonably accommodating competing private development interests.”

“The BLNR [Board of Land and Natural Resources] conducted a thorough analysis as required,” the court ruled. “The BLNR found no Native Hawaiian cultural resources or traditional or customary practices within the TMT Observatory site and Access Way areas.” It also concluded that “The BLNR found that the TMT Observatory will not be visible from Lake Waiau, Pu’u Līlīnoe, or Kūkahau’ula, which are culturally sensitive areas of the summit of Mauna Kea.” The nearest site of historic significance was a single stone wedged upright, and that was 225 feet away from any planned buildings.

Thus, with the Board of Land and Natural Resources having followed appropriate procedures and not having made any glaring error, its decision was allowed to stand. While pursuing some of the issues—such as free exercise of religious practices—might be possible in federal courts, the decision leaves the state permitting process in the clear. The opponents of the Thirty Meter Telescope may also attempt to block construction through further protests.