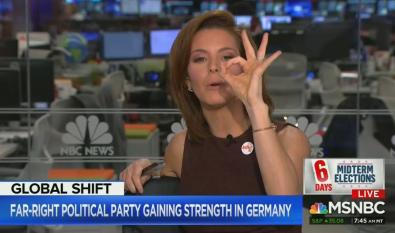 Apparently, MSNBC’s Stephanie Ruhle isn’t aware that American presidents call and congratulate world leaders upon winning, even if those victories are disputed or if the individual involved has bad ideas, weird ideas or un-American beliefs. On Wednesday, the host bashed Donald Trump for congratulating Brazil’s new president, Jair Bolsonaro. This, apparently, is a coded message to the “far right.”

Then came the through-the-looking-glass conspiracy theories: “But you know who realizes what he represents? People in the far right who are homophobic, who are against equality. When they see the president say something like that, it’s a dog whistle where he says, ‘I’m on your team.’”

Here is the entirety of Trump’s dangerous message of support:

Fairly standard stuff. Is Ruhle not aware that this is what presidents do? How did she feel about Barack Obama’s call of congratulations to Vladimir Putin? The Obama White House archives recounted the March 9, 2012 call:

President Obama called Russian President-elect and Prime Minister Putin to congratulate him on his recent victory in the Russian Presidential election.  President Obama highlighted achievements in U.S.-Russia relations over the past three years with President Medvedev, including cooperation on Afghanistan, the conclusion and ratification of the START agreement, Russia’s recent invitation to join the World Trade Organization (WTO) and cooperation on Iran.  President Obama and President-Elect Putin agreed that the successful reset in relations should be built upon during the coming years.

Is this some sort of coded message from Obama?