The world’s richest executives at tech companies including Amazon, Apple, Facebook and Google took a massive hit as the stock market plunged on Tuesday and investors scrambled to sell their shares.

Amazon CEO Jeff Bezos has lost a stunning $42billion since early September, according to the Bloomberg Billionaires Index, as the e-commerce giant’s stock has dropped more than 25 percent.

Embattled Facebook CEO Mark Zuckerberg has also taken a beating as reports indicate he’s lost some $34billion since late July and is now worth $52billion – ranking as the seventh-richest person in the world.

Google chiefs Larry Page and Sergey Brin have lost a combined $20billion from their peak wealth in July as the search engine’s stock has dropped 20 percent and closed in a bear market on Monday for the first time since 2011. 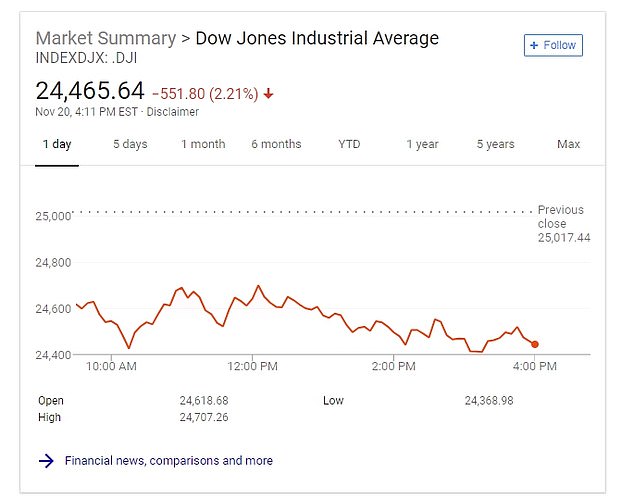 Bezos, whose net worth peaked at $168billion in September, appears to have taken the biggest hit in recent months, though he remains the richest person in the world with an estimated net worth of $126million.

Trailing behind Bezos as the second-richest person in the world is Microsoft founder Bill Gates, who has lost $5billion since early October and is now worth roughly $95billion.

Then there’s Warren Buffett, who has lost about $4billion since his wealth peaked at $93.4billion early this year.

‘Corrections come and go,’ he told reporters at the White House, saying that the economy is strong overall.

‘I’m reading some of the weirdest stuff how a recession is in the future,’ Kudlow said. ‘Nonsense.’

‘Recession is so far in the distance I can’t see it,’ he said after appearing in a Fox Business Network interview.

The dip has been largely driven by plummeting tech stocks which have not responded well to uncertainty surrounding the US’s relationship with China.

What began as a tech stock sell-off though has trickled through the market and now other industries are also feeling the pressure.

Kudlow had similarly rosy predictions in December 2007, the month the last significant US recession began.

‘There’s no recession coming. The pessimistas were wrong. It’s not going to happen,’ he wrote at the time in a National Review essay.

‘The pessimists are a persistent bunch.

‘In 2006, they were certain a recession was just around the corner. They were wrong,’ he said then.

Since the 2016 Presidential Election, the markets have been on a continuous winning streak and have gained more than 6,000 points.

The Dow is now however on track to wipe out its 2018 gains entirely.

The slump is the result of a combination of pressure from trade tensions with China and Silicon Valley scandals which have rocked the market’s faith in the once unstoppable companies.