Executives vow to pay down debt as they digest WarnerMedia, prepare Netflix rival 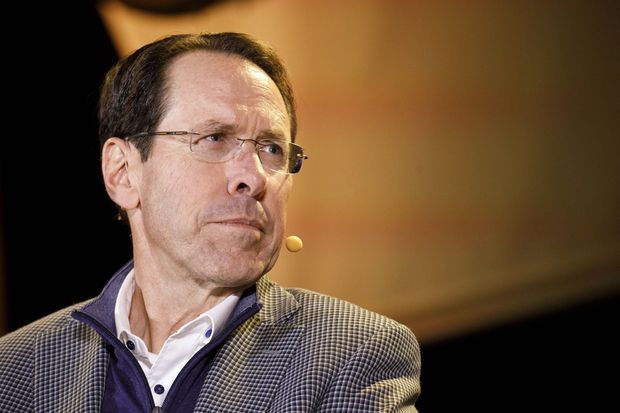 AT&T Inc., trying to reassure investors it can capitalize on its big acquisition of Time Warner, said it plans to offer three versions of a new streaming video service next year that will feature original movies and television series from Warner Bros., Turner and HBO.

The service, intended to help the telecom giant compete with new technology rivals like Netflix Inc. and a similar online system planned by Walt Disney Co. , is part of AT&T’s venture into other fields aside from wireless and traditional pay-TV services.

AT&T had said it planned to launch the streaming service in the fourth quarter of 2019 but hadn’t disclosed many details. Executives didn’t say Thursday at a briefing for analysts how much the tiers would cost or which shows and movies each would include.

Chief Executive Randall Stephenson said Thursday that his collection of cellphone, internet and media businesses will generate $26 billion of free cash flow next year, allowing the company to uphold its generous dividend as it chips away at an unprecedented debt load.

“Our discretionary cash flow is going to go to one place,” he said. “It’s going to be paying down debt.”

The company’s acquisition of Time Warner, renamed WarnerMedia, turned it into a major producer of film and television content, though the larger wireless unit still generates more revenue.

WarnerMedia plans an entry-level streaming service focused on movies, a second tier with original programming and more films and a bundle tier with content from the first two plus classic films, comedy and children’s programming. WarnerMedia chief John Stankey said the bundles would grow over time to include content licensed from other media companies.

“We understand that this product has to be good enough” to get viewers to spend money on it, Mr. Stankey said.

Mr. Stankey said that other media companies should expect to “pivot” in the coming months to adjust to the new strategy that pulls many of WarnerMedia’s movies and TV series off other libraries and onto AT&T’s planned on-demand service.

“Some of the incumbents should expect that their libraries are going to become a lot thinner,” he said.

The Dallas-based company’s shares have dropped more than 20% this year as investors first worried about the Time Warner deal’s fate amid a monthslong court battle with federal antitrust enforcers. A June court victory allowed the company to close its purchase for about $81 billion, which refocused investors’ concerns on its record-setting debt burden.

Executives have said AT&T’s free cash flow is ample enough to cover day-to-day expenses, network investments and dividend outlays, leaving about $12 billion that can be used to pay down debt next year.

The company said it has several assets queued up for sale if needed to help generate more cash, including its minority stakes in streaming video service Hulu and satellite-TV operator Sky Mexico. The company estimated those stakes and other assets could bring in $6 billion to $8 billion.

It will devote about $23 billion to capital spending goals like network investments, excluding reimbursements from its FirstNet system for public- safety customers.

Some factors have worked in the company’s favor. Analysts say most wireless carriers throttled back on deep discounts this year, allowing AT&T to improve the performance of its core cellphone business. Its new WarnerMedia segment also helped the bottom line in the third quarter.

Other divisions have fared worse. The division that holds DirecTV shed more than 850,000 satellite-TV subscribers this year, hurting its profitability despite growth in home broadband users. Executives on Thursday repeated their pledge to make the division’s earnings before income tax, depreciation and amortization flat in 2019 after the current year’s steep declines.

Mr. Stephenson said executives recognize the trends dragging down the pay-TV business and are working on ways to address them. The company in 2016 launched DirecTV Now, an online package of live TV channels that costs less than traditional programming. That service has grown at the expense of the satellite business, but not quickly enough to halt the overall decline in AT&T’s pay-TV subscriber base.

“The customer is now rebelling,” the CEO said. “There are fewer and fewer customers willing to pay the freight of that full bundle.”