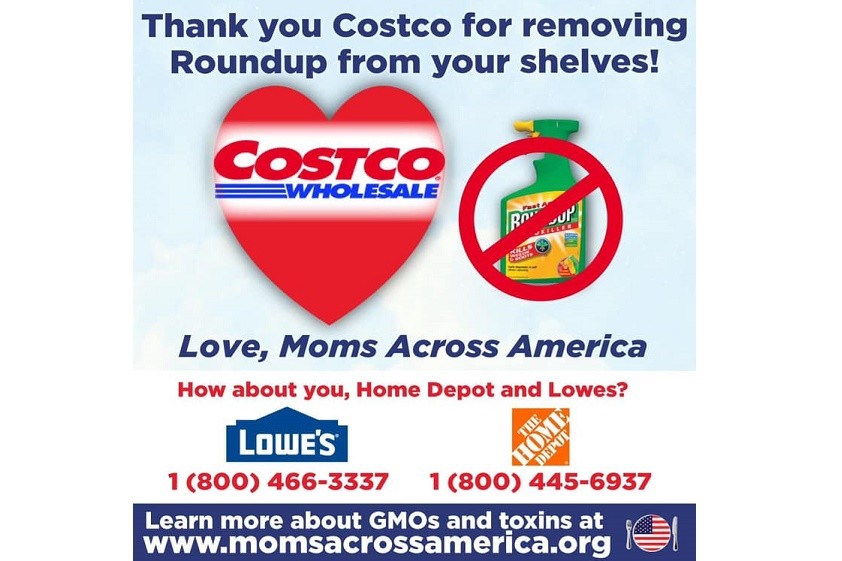 Another blow to Bayer (formerly Monsanto) and a win for us and the environment: it’s been confirmed via Facebook Live, by the founder of Moms Across America’s Zen Honeycutt, that Costco will stop selling RoundUp and glyphosate-based herbicides this Spring! (Hopefully, stores like Lowe’s and Home Depot will be next.)

Moms Across America and other equally huge organizations have had petitions signed by hundreds of thousands (total) to get big brand stores to stop carrying Roundup and now it’s finally happening! And remember, they had already banned eggs that were not cage-free and other dangerous pesticides, so it only seems natural this would be their next move.

To help Lowe’s and Home Depot make the same decision, they may need some help. If you have the time, give them a call and ask them- politely- to stop selling the carcinogenic, endocrine disrupting, and dangerous weedkiller.1 (Keep in mind, once the big box retailers stop, generally, the smaller sellers do as well.) And at the same time, encourage them to offer other weed killing options. (Or maybe even invest in some!)

Costco’s is the largest buyer of organic foods in the country. This move is meant to show (and is doing that) the public that they care about people and the environment. Thank you, Costco for having the integrity to make this move.

Cities, states, and countries who have started to ban the use of the dangerous chemical and it’s about time. After all, the truth is that there are no safe levels of glyphosate!

If we continue to work together, we will get glyphosate banned in order to create a healthier world for our children, grandchildren, and generations to come. It is going to take all of us. Thanks for being part of the solution.2