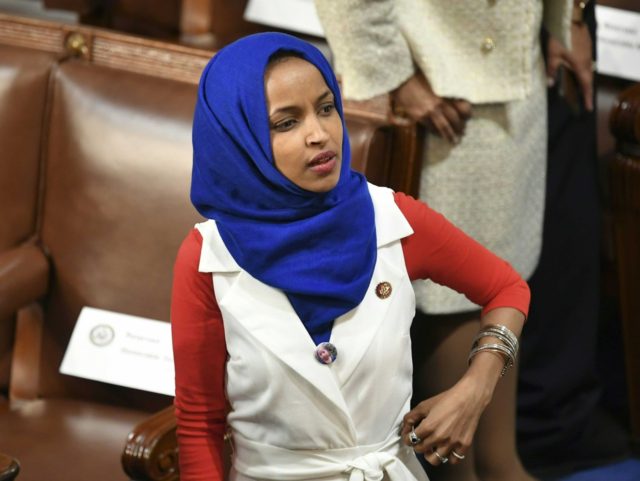 Rep. Ilhan Omar (D-MN) launched a new antisemitic volley on Twitter on Sunday, accusing a pro-Israel group of buying influence in Congress, and referring to an offensive Jewish stereotype that even fellow critics of Israel found abhorrent.

Omar began by re-tweeting Glenn Greenwald, co-founder of the Intercept, who has long been hostile to Israel.

Greenwald had criticized House Minority Leader Kevin McCarthy (D-CA) for his comments to Breitbart News Saturday and other outlets, accusing Democrats of double standards in their reluctance to punish Omar and other Democrats for antisemitic rhetoric when they had eagerly censured Rep. Steve King (R-IA) for racist language.

“Nancy Pelosi has not said a word,” McCarthy told Breitbart News Saturday. “So that means she’s supportive of these actions” by Omar.

McCarthy told Breitbart News: “If [Pelosi] does not do something, we will take action on the floor.”

Greenwald tweeted in response that it was “stunning” that McCarthy and Republicans were defending Israel:

One thought on “Democrat Ilhan Omar Uses Anti-Jewish Smear About Money: ‘She Might as Well Call Us Hook-Nosed’”