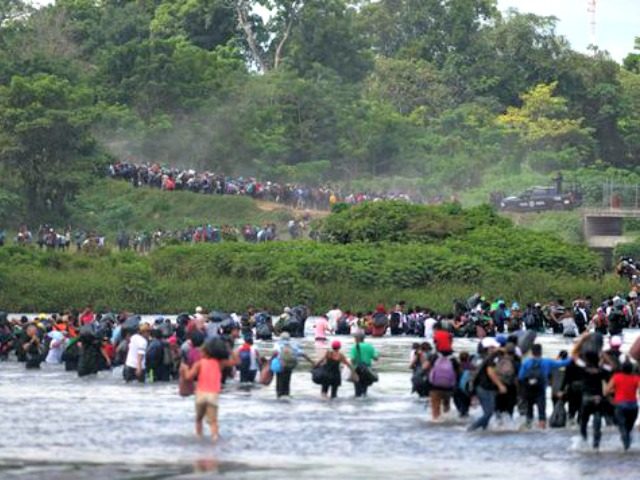 Homeland security chief Kirstjen Nielsen suggested Congress has imposed a policy of open borders on the United States, amid predictions that 900,000 migrants will walk through border loopholes into jobs and communities this year.

“The truth is that the politics and policies of open borders have failed the American people,” Nielsen tweeted after enduring a hearing in which Democrats lashed at her for recording the catch and release of economic migrants.

Throughout the March 6 hearing, Democrats ignored the mounting evidence of murders, rapes, and robberies among the migrants, and the data showing that cheap labor migrants drive down Americans’ wages and opportunities. The Democrats ignored Nielsen’s measured calls for border reforms and slammed her enforcement of the law, even after she calmly described the loopholes which are encouraging a wave of perhaps 900,000 migrants this year.

“We are on track for this year for 900,000 apprehensions at the border,” she told the House’s Committee on Homeland Security, one day after officials revealed that 76,000 migrants flooded across the border in February 2019.

After the hearing, she tweeted:

Our broken system endures, and the ongoing humanitarian and security crisis at our Southwest Border leaves many minors and families at extreme risk of being exploited by traffickers, human smugglers, gangs, and other nefarious actors seeking to profit at their expense.

Activist courts, congressional inaction, and criminals intent on breaking our laws stand in the way of confronting illegal and uncontrolled migration threatening our safety and security. What was a crisis is now a full-fledged emergency.

The U.S. leads the world in welcoming individuals fleeing persecution. In the 2017 calendar year, the U.S. granted asylum and refugee status to more individuals than Canada, Australia, and the United Kingdom combined.

We welcome those who come to America legally, especially those who are truly fleeing persecution and who seek refuge in our country.

Migrants are walking through the border by presenting a child while claiming asylum. The maneuver exploits legal rules which are championed by Democrats and progressive judges and which require border officials to release the migrants within 20 days so they can get jobs until their court date, two or three years later. This open door is expected to encourage migration by many additional migrants.

In contrast to Nielsen’s dramatic invocation of “open borders,” President Donald Trump is offering a mixed message, simultaneously praising border operations, characterizing the migration as an “invasion,” and championing his emergency declaration.

On March 6, for example, Trump told a panel of business leaders that “We are doing an amazing job [on the border] considering it’s really an onslaught very much. I call it ‘invasion.’  They always get upset when I say ‘an invasion.’  But it really is somewhat of an invasion.”

On February 15, in a speech at the Rose Garden, Trump announced his emergency plan for the wall, while also declaring:

We’ve detained more people.  Our border agents are doing such incredible work.  Our military has been incredible.  We put up barbed wire on top of certain old walls that were there.  We fixed the wall and we loaded it up with barbed wire.  It’s very successful.

But our military has been fantastic, and I want to thank them.  And it’s very necessary.  We’ve broken up two caravans that are on their way.  They just are breaking.  They’re in the process of breaking up.  We have another one that we haven’t been able to break up yet.

We want to have a safe country.  I ran on a very simple slogan: “Make America Great Again.”  If you’re going to have drugs pouring across the border, if you’re going to have human traffickers pouring across the border in areas where we have no protection, in areas where we don’t have a barrier, then very hard to make America great again.

Trump’s mixed message includes cheerleading for Americans while arguing that investors should be allowed to import labor across the U.S. border — typically described “merit” labor. This permission would exempt investors and CEOs from the usual requirement to compete in the free market for Americans’ time and work.

In 2019, because of catch-and-release rules mandated by Congress and the courts, the federal government also will likely release at least 350,000 Central American laborers into the U.S. job market, even as at least 500,000 more migrants also sneak past U.S. border defenses or overstay their visas.

Overall, in 2019, the U.S. government will allow at least two million new foreign workers into the United States to compete for the starter jobs sought by the latest wave of four million U.S. graduates. The new migrants also undermine the 24 million other Americans and the roughly three million legal immigrants who have joined the workforce since 2014.

This federal policy of using legal and illegal migration to boost economic growth for investors shifts enormous wealth from young employees towards older investors by flooding the market with cheap white-collar and blue-collar foreign labor.