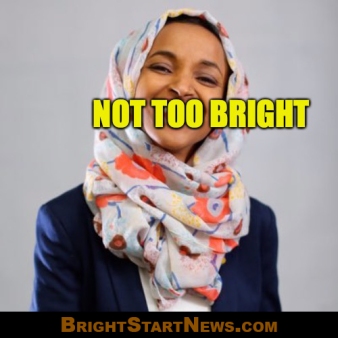 Ilhan Omar has stepped in it again. This time, she attacked former President Obama.

Ilhan Omar: Obama’s a ‘pretty face’ who got ‘away with murder’

But Omar insists that she didn’t say that, and released an audio recording of her interview.

Exhibit A of how reporters distort words.

I’m an Obama fan! I was saying how Trump is different from Obama, and why we should focus on policy not politics.

The audio she put up 100% confirms the quote and makes it worse.

It’s clear from the audio, she’s not only talking about Obama, who she references by name in the conversation, but she was also speaking more broadly about ALL Democrats!

OMAR: We think of ourselves as Democrats, but many of the ways that our democratic leaders have conducted themselves within the system is not one that we’re all proud of.

And all of that is very true.

And when we talk about waking people up from complacency, it’s to say, we can’t only be upset with Trump, because he’s not a politician who sells us his policies in a most perfect way. His policies are bad, but many of the people who came before him also had really bad policies, they just were more polished than he was. And that’s not what we should be looking for anymore. We don’t want anybody to get away with murder because they are polished. We want to recognize the actual policies that are behind the pretty face and the smile….

From the KKK to Eugenics to ANTIFA to OMAR, the left is a cesspit of bigotry and disappointment.