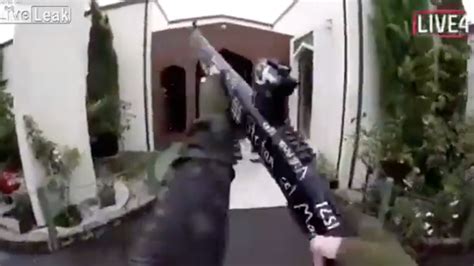 On March 15, an Australian gunman tragically slaughtered 50 victims at a mosque in Christchurch, New Zealand.  The gunman, who shall remain nameless, characterizes himself as an “eco-fascist.”  In his manifesto, which has been banned in New Zealand with stiff penalties, and which Big Tech is also censoring, the killer said, “I am an ethno-nationalist eco-fascist.”  The gunman believes in the “ethnic autonomy for all peoples with a focus on the preservation of nature, and the natural order.”  In other words, he is a multi-ethnic racist environmentalist who believes that the best way to save the planet from ecological destruction is not only to have fewer people on the Earth, but further, such people need to live in their own indigenous national environments.

Although the press has been to quick to label the gunman a white supremacist, his pro-European, pro-white stances are surprisingly more racially and ethnically nuanced than he is given credit for.  The gunman prides himself in that he has “spent many years travelling through many, many nations.”

Everywhere I travelled, barring a few small exceptions, I was treated wonderfully, often as a guest and even as a friend.  The varied cultures of the world greeted me with warmth and compassion, and I very much enjoyed nearly every moment I spent with them.  I wish the different peoples of their world all the best regardless of their ethnicity, race, culture of faith and that they live in peace and prosperity, amongst their own people, practicing their own traditions, in their own nations.”  However, he then warns, “But, if those same people seek to come to my people’s lands, replace my people, subjugate my people, make war upon on my people, then I shall be forced to fight them, and hold nothing in reserve.

In his nature-based ideology, he compares differing ethnicities of people groups to invasive species that can only despoil the environment — which therefore demands they be repelled.  Such cultural, ethnic, and racial mixing will invariably upset the ecological balance of any given “local only” self-sustaining bioregion.

With regard to the planet’s future, the gunman complains:

There is no green future with never ending population growth.  The ideal green world cannot exist in a world of 100 billion, 50 billion, or even 10 billion people.  Continued immigration into Europe is environmental warfare and ultimately destructive to nature itself. The Europe of the future is not one of concrete and steel, smog and wires, but a place of forests, lakes, mountains and meadows.  Not a place where English is the de-facto language, but a place where every European language, belief and tradition is valued.  Each nation and each ethnicity are [sic] melded by their own environment, and if they are to be protected — so must their own environments.  There is no traditionalism without environmentalism.

Thus, the so-called traditional “conservatism” the press has been quick to hang on the neck of the killer has nothing to do with free markets, free enterprise, free speech, or freedom of religion.  On the contrary, the killer’s “conservatism” is strictly based on a much more pointed form of racist identity politics — an identity politics completely indigenous and nationalistically rooted, born, and raised in each country’s own biological-ecological milieu — a tribalistic biopolitics of sorts at the very least — that is dead set against the classical liberalism of America.  Closely related, the gunman especially denigrates the American melting pot at the end of his manifesto.

As such, the gunman unsurprisingly mocks the political results of American conservativism:

Ask yourself, truly, what has modern conservatism managed to conserve?  What does it seek to conserve?  The natural environment?  Western Culture?  Ethnic autonomy?  Religion?  The nation?  The race?  Nothing is conserved.  The natural environment is industrialized, pulverized and commoditized.  Western culture is trivialized, pulped and blended into a smear of meaningless nothing, with the only tenets and beliefs seemingly held to are the myth of the individual, the value of work — productivity for the benefit of your capitalist owners — and the sovereignty of private property — to ensure none of us get grand ideas of taking the unearned wealth of our owners[.] … It’s profit, and profit alone that drives them, all else is secondary.  The notion of a racial future or destiny is as foreign to them as social responsibilities.  Not a thing has been conserved other than corporate profits and the ever-increasing wealth of the 1% that exploit the people for their own benefit.  Conservatism is dead.  Thank god.  Now let us bury it and move on to something of worth.

Worse, the killer demands that the modern world forge a new utopian path of multi-ethnic racism, revolution, and environmentalism — something he calls “The Great Replacement.”  Such green apocalypticism includes the embracing of death in order to propagate an eschatological future, echoing even some of the old Nazi existentialism of the 1930s starring Martin Heidegger.  To accomplish this grand task, the gunman strategizes:

The gunman concludes that global capitalism is the primary enemy.  What is required now is to destabilize it through revolution.  He thus hopes his slaughter of the Muslims in the New Zealand mosque will lead to a gun war in the United States.  He further hopes the Left will ramp up its anti-gun activism thanks to his own extremist actions.  This, he presumes, will help precipitate a civil war that will finally favor the white people of America and northern Europe — which he hopes further will help them learn to keep their own ethnicity and culture pure and self-sufficiently rooted in nature that will expunge and remove the great evils of global capitalism.  “Barring the importation of all goods produced outside the New European zone (the new Western world) is an essential pillar of the future Western economy.  Goods produced without care for the natural world, dignity of workers, lasting culture or white civilizations future should never be allowed into the new morally focused and ethically focused European market.”

Eco-fascism is no metaphor.  Not only is eco-fascism defined in the historical past under National Socialism’s umbrella of Social Darwinian biology, but it is also an empirical fact today as well.  Many white supremacist groups are, in fact, green.  Some astute scholars on the Left fully recognize the green neo-Nazi connections but conveniently distance themselves from it by labeling it “right-wing ecology.”  Yet the German green party itself was essentially founded by real Nazis.

The gunman himself believes in a nationalistic form of multiethnic environmentalism — as long as the tribe stays at home.  What he criticizes leftist multiculturalism for is trying to merge itself with the American melting pot along Marxian egalitarian grounds.  Even though the gunman briefly praises Red China in his manifesto, this is not because of its Marxism per se, but because the Chinese socialists keep their country Chinese.

In sum, what is seen in the Christchurch tragedy is an eco-fascism based on a pro-white nationalistic multi-ethnic environmentalism versus American classical liberalism.  He also targets the anti-white multicultural environmentalists in the sense that he believes they are contradicting their own green doctrines of local sustainability — with Muslims standing in the middle of the triangulation.

Mark Musser is a part-time missionary, pastor, author, and farmer who lives in Olympia, Washington in the summers but spends most of his time on the mission field in the former Soviet Union.  He is currently a doctoral candidate at Corban University in Salem, Oregon and is a contributing writer for the Cornwall Alliance.  His book Nazi Ecology provides a sobering history lesson on the philosophical foundations of the early German green movement, which was absorbed by National Socialism in the 1930s and proved to be a powerful undercurrent during the Holocaust.

Vaccine Deaths
~Police Investigate 12-Year-Old Girl’s Death After She Suddenly Collapses While Running~24-Year-Old Irish Athlete Dillon Quirke Dies Unexpectedly After Collapsing Mid-Game~Covid Vaccines Are Killing One in Every 800 Over-60s and Should Be Withdrawn Immediately, Says Leading Vaccine Scientist~3 year-old girl dies from Vaccine~Deaths From “Unknown” Causes Are Now the Leading Killer in Alberta, Canada Following the Rollout of the Experimental Vaccine – 2021 Total Significantly Higher than 2019