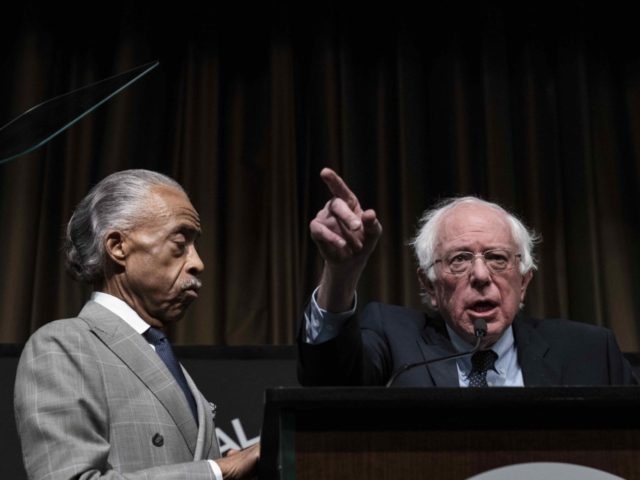 Democrats have given President Donald Trump an advantage on the issue of race relations after spending the week pandering to Al Sharpton and promising to take up the issue of reparations for slavery if elected.

Trump has arguably been the most “progressive” president for African-Americans (as well as gays, Jews, and others). As Breitbart News noted recently:

Under Trump, black unemployment is at its lowest level in history. Trump pushed for, and signed into law, sweeping prison reforms backed by leaders of the African-American community. He pardoned the late boxer Jack Johnson, whom Barack Obama neglected. He also elevated a new generation of black conservatives in public life.

However, that record of achievement is often obscured by the media, as well as by false accusations of racism from the opposition, such as the claim that he referred to neo-Nazis in Charlottesville, Virginia, as “very fine people.”

As a result of that misinformation, and of Trump’s occasional rhetorical flubs, race relations have been one of the few areas in which he has fallen short.

All of the Democratic presidential candidates who appeared at Sharpton’s National Action Network conference this week endorsed the idea, at least in principle, of reparations.

Only 26% of Americans support reparations. And it is unclear how reparations could be managed nearly 160 years after the Civil War, especially given immigration, intermarriage, and the passage of time.

By endorsing Sharpton and his push for reparations, Democrats are giving Trump the edge on one of their few winning issues.

Joel B. Pollak is Senior Editor-at-Large at Breitbart News. He is a winner of the 2018 Robert Novak Journalism Alumni Fellowship. He is also the co-author of How Trump Won: The Inside Story of a Revolution, which is available from Regnery. Follow him on Twitter at @joelpollak.