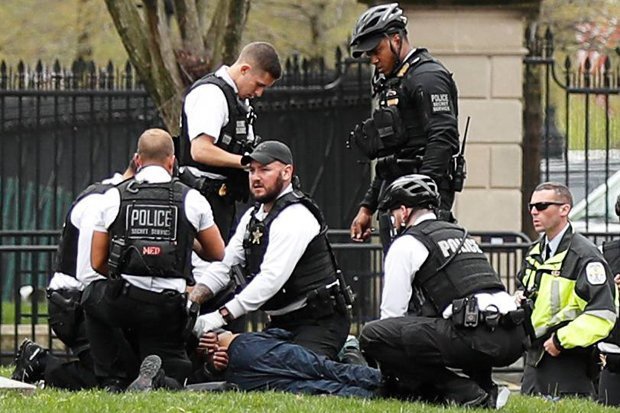 A MAN on an electric scooter has attempted to set fire to himself outside of the White House in Washington DC with US President Donald Trump nearby.

Emergency services can be seen in pics tackling a person to the ground near the White House in Washington DC.

Police and ambulance crews rushed to the scene around 3pm (8pm BST) as a man in an electric scooter suddenly attempted to set himself ablaze.

The person was later seen being carried away from the presidential residence in Pennsylvania Avenue.

President Donald Trump was giving an impromptu press conference about immigration at the time.

He is safe according to security services.

It is also being reported that suspicious packages are in the area.

A Secret Service spokeswoman said: “An individual set his jacket on fire in front of the White House.

“First aid is being rendered and there is no threat

It later added: “The male subject has been transported to a local hospital with what appears to be non-life threatening injuries.”

Pennsylvania Avenue in front of the White House was closed to pedestrian traffic.

A nearby block of 17th Street was closed as well, and at least portions of the White House complex were locked down.

Reporters tweeted from the scene as it was happening.

Jeremy Diamond of CNN wrote on Twitter: “Secret service spokeswoman tells me a man set his jacket on fire in front of the White House.

“He is being treated for injuries.

“No threat to the president”

Nicholas Kristof, of the New York Times, added: “Someone apparently set himself on fire in front of the White House just now.

“I was coming out of the West Wing, and the Secret Service isn’t letting anyone out onto Pennsylvania Ave.

“They say there are also suspicious packages.”