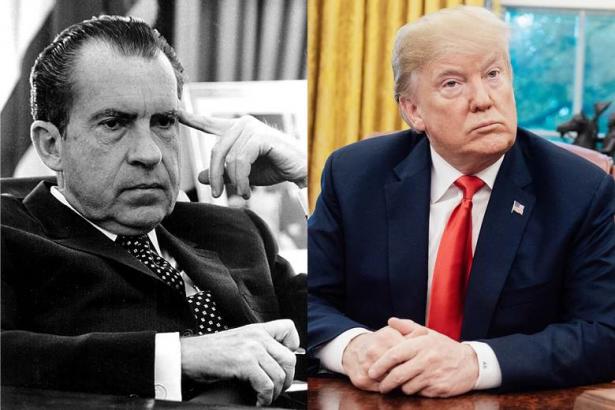 For most of my lifetime, “Watergate” has been used as the measuring stick for political corruption. What exactly was the Watergate scandal?

On June 17, 1972, five men were arrested for burglarizing the headquarters of the Democratic National Committee at the Watergate office complex in Washington, D. C. It was never alleged that President Richard M. Nixon knew about the burglary prior to the attempt, but that he tried to use the power of the presidency to obstruct justice in order to protect members of his administration and his reelection committee from facing criminal charges. Ultimately, Nixon was forced to resign in order to avoid congressional impeachment and a trial in the Senate.

The great irony is that Nixon was going to crush McGovern in the general election without any illegal help. Nothing that could have been stolen from the Democrats could have helped the Republican Party win any bigger in 1972 — Nixon claimed 520 electoral votes and carried 49 states. The break-in was stupid and unnecessary.

And most importantly, it was illegal. Sure, the people initially apprehended were only a couple of Cuban refugees and a pair of former CIA spooks, but James W. McCord was with them — a security coordinator for the Republican National Committee and Committee for the Re-election of the President. Investigators were eventually able to connect those five to G. Gordon Liddy and Howard Hunt, and those seven men were indicted by a grand jury on September 15, 1972. Over the course of the Watergate scandal, 69 people were eventually indicted, and 48 were found guilty. Nixon was pardoned by President Gerald Ford on September 8, 1974, officially putting an end to the whole sordid matter.

Since that fateful turn of events, political scandals are typically compared to Watergate and inevitably judged to have fallen short. Subsequent scandals have often been labeled as such by merely appending “gate” as a suffix: thus we’ve had “Climategate” for the global warming email scandal, as one example. In fact, there’s a whole Wikipedia page devoted to organizing and listing all the scandals that have been designated as such simply by slapping the word “gate” at the end of it.

In a delicious irony, this week Attorney General William Barr implied that a new bar might have been set (pun intended) during the 2016 election cycle when he announced that he believes President Trump’s political campaign was spied upon by the federal government.

Just let that sink in for a moment and noodle around in your brain.

In 1972, Republicans were caught using former CIA operatives to spy on their political rivals. In 2016, Democrats have now been caught using active FBI and senior Department of Justice employees to spy on President Trump. It is no longer debatable whether or not it happened, because A. G. Barr just told us it happened. The only question that remains is whether or not they had any sort of justifiable reason for doing so, except that question seems to have already been resolved by Special Counsel Robert Mueller, because his report found no evidence of collusion between the Trump campaign and the Russian government. In fact, the opposite appears to be true — it looks as if federal agencies conspired with foreign governments to entrap peripheral members of the Trump campaign.

Heads need to roll. Maybe even literally. This appears to the crime of sedition, the act of conspiring to incite rebellion against the authority of our government. If it could be proved that a foreign government had been involved in the conspiracy, the crimes involved might even rise to the level of treason. Sedition is bad enough.

At the heart of the Watergate scandal was a bungled burglary. No one got hurt. If Nixon hadn’t tried to obstruct justice, his presidency might have survived the scandal. Watergate is about to become ancient history because it pales in comparison to what the Obama administration just did. Innocent American citizens have had their lives destroyed in a criminal attempt to topple the Trump administration. Let’s recap how it happened.

To the surprise of pretty much everyone except Donald Trump, he rose to the top of the field and became the Republican nominee. Despite Bernie Sanders appearing to win most of the primaries and having the enthusiasm of most liberals behind him, Hillary Clinton became the Democratic nominee because the fix was in before the votes were cast. While working for the Democratic National Committee and campaign of Hillary Clinton, Marc Elias (from the law firm Perkins-Coie) hired Fusion GPS to create opposition research now commonly known as the “Steele dossier,” a collection of memos full of salacious unsubstantiated rumors and ridiculous claims that only a gullible maverick like Senator John McCain would believe. Fortunately for the conspirators, McCain passed the dossier over to James Comey at the FBI, giving the Obama administration an excuse to open a counterintelligence investigation into Trump even though they knew the “information” originated from the Clinton campaign and was unverified.

How did they know? Bruce Ohr told them. And how did Bruce know? His wife, Nellie, works for Fusion GPS. Meanwhile, Peter Strzok, Lisa Page, James Comey, Andrew McCabe, and others working within the FBI and Obama’s Department of Justice conspired to exonerate Hillary Clinton of serious crimes while charging her opponent with egregiously false, manufactured accusations of colluding with Russia.

How can this not be a plot to overthrow our government?

To make matters worse, Susan Rice, Samantha Power, James Clapper, and Sally Yates were all guilty of improperly “unmasking” innocent American citizens for nefarious political reasons, which led to General Michael Flynn’s unfair prosecution by Mueller after FBI officials had concluded he wasn’t lying to them during their unfair interview. How can this happen?

Where does the buck stop?

Although President Obama frequently claimed he never knew about anything until after he’d seen it in the news, he might not be able get away with pleading ignorance this time. According to texts sent between Lisa Page and Peter Strzok, President Obama wanted to know everything they were doing. In contrast, Nixon didn’t find out about the Watergate break-in until after it had already happened.

Barack Obama has a big problem. He’s apparently involved in this effort to overturn the results of a presidential election up to those oversized ears of his. Somebody will probably start singing to get a reduced sentence pretty soon, and if they can corroborate their testimony with evidence, Obama can stop worrying about his legacy and start worrying about his imminent future. The penalty for sedition calls for up to twenty years in prison, and it is unlikely that President Trump would consider a pardon of Obama under the circumstances, because he was the target of this conspiracy. Dan Bongino calls it “Spygate”, but some people confuse that with a different scandal involving the New England Patriots and New York Jets.

Perhaps we should call this ugly blemish on American history “Obamagate?”

No matter what we eventually label this ugly episode in our nation’s history, the odds are strong that the word “gate” will be appended to the end of the phrase.

Will there be a patriot in the Democratic Party with the courage to paraphrase the same question Howard Baker posed about Watergate in 1972: “What did the President know, and when did he know it?”

Vaccine Deaths
~One out of every 800 people over 60 who gets vaccinated for covid DIES, says scientist~Police Investigate 12-Year-Old Girl’s Death After She Suddenly Collapses While Running~24-Year-Old Irish Athlete Dillon Quirke Dies Unexpectedly After Collapsing Mid-Game~Covid Vaccines Are Killing One in Every 800 Over-60s and Should Be Withdrawn Immediately, Says Leading Vaccine Scientist~3 year-old girl dies from Vaccine