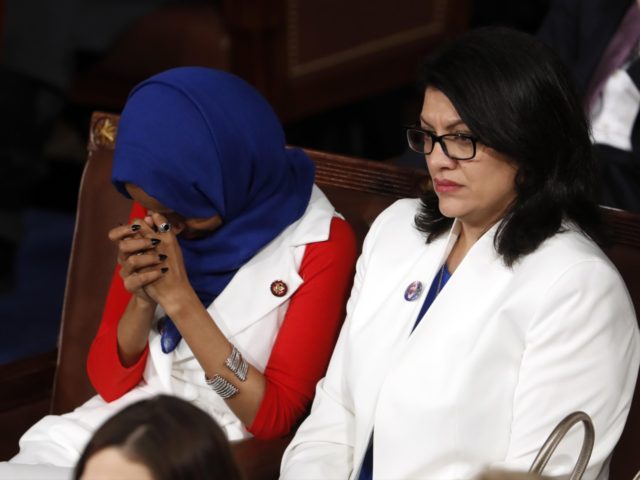 Rep. Rashida Tlaib (D-MI) on Saturday claimed Democrat leadership isn’t doing enough to support Rep. Ilhan Omar (D-MN) in the wake of blowback for trivializing the September 11th, 2001, terror attacks, suggesting the Party only puts the pair of Muslim lawmakers in photos to tout its diversity.

“They put us in photos when they want to show our party is diverse. However, when we ask to be at the table, or speak up about issues that impact who we are, what we fight for & why we ran in the first place, we are ignored. To truly honor our diversity is to never silence us,” Tlaib tweeted in response to a California state legislative aide lamenting a so-called “lack of support from Democratic leadership.”

Omar is facing a firestorm of criticism for recent remarks at a private fundraiser for the Council on American-Islamic Relations (CAIR) of Greater Los Angeles in which she refered to 9/11 as a day on which “some people did something.” She said:

CAIR was founded after 9/11, because they recognize that some people did something, and then all of us were starting to lose access to our civil liberties. You can’t just say that today someone is looking at me strange, that I am going to try to make myself look pleasant. You have to say that person is looking at me strange, I am not comfortable with it. I am going to talk to them and ask them why.

Omar also urged attendees to “raise hell” and “make people uncomfortable” to fight what she described as Muslim-Americans being treated as second class citizens following the deadly attacks.

President Donald Trump on Friday tweeted a clip including Omar’s remarks and the attack on both the World Trade Center and the Pentagon.

House Speaker Nancy Pelosi (D-CA) and other high-profile Democrats slammed the tweet, claiming it was an incitement of violence against the Minnesota Democrat. “The memory of 9/11 is sacred ground, and any discussion of it must be done with reverence. The President shouldn’t use the painful images of 9/11 for a political attack,” said Pelosi.

“Ilhan Omar is a leader with strength and courage,” said 2020 presidential candidate Sen. Bernie Sanders (I-VT). “She won’t back down to Trump’s racism and hate, and neither will we. The disgusting and dangerous attacks against her must end.”

Sen. Elizabeth Warren (D-MA), another White House hopeful, claimed: “The President is inciting violence against a sitting Congresswoman—and an entire group of Americans based on their religion. It’s disgusting. It’s shameful. And any elected leader who refuses to condemn it shares responsibility for it.”

Tlaib and Omar, the first Muslim women to be elected to Congress, have found themselves at the center of controversy since coming to Washington. Both have been accused of antisemitic and trafficking in anti-Jewish tropes.

One thought on “Rashida Tlaib: Democrats Put Muslims in Photos When They Want to Show Party Is ‘Diverse’”