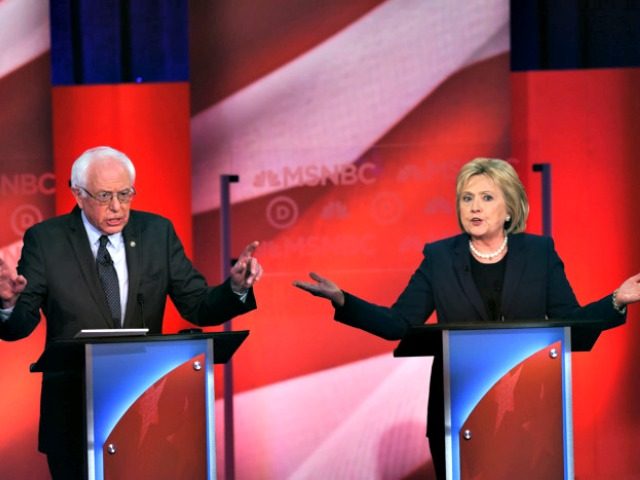 Feuding between two liberal camps broke out into the open this week, with the New York Times publishing a front page article on Tuesday detailing “bad blood” between Sen. Bernie Sanders (I-VT)’s campaign manager and a top Hillary Clinton surrogate.

The NYT piece, titled, “Right Where Democrats Left Off: It’s Clinton Loyalist vs. Sanders,” illustrates the struggles the Democrat Party is facing in trying to bring together the increasingly vocal progressive left wing and the more centrist-left associated with yesterday’s Democrat Party.

The piece details the still pervasive enmity between Neera Tanden, a former top Clinton campaign aide who now runs the Center for American Progress, and Faiz Shakir, the former chief editor at CAP’s ThinkProgress website and now the campaign manager for Sanders.

It revealed that Tanden had “pushed” Shakir once, after she accompanied Clinton to “what was expected to be an easy interview” with Shakir in 2008, when Shakir asked Clinton about her support for the Iraq War.

“I didn’t slug him, I pushed him,” Tanden told the Times.

The fight began heating up over the last several days.

ThinkProgress blasted Sanders in a video released on April 9, that highlighted that the prominent socialist who has railed against “millionaires” his whole career is also now a millionaire.

Tanden shot back in an email to Shakir that CAP shared the “goals of unity,” according to the Times.

While Tanden herself is not cited in the Times piece, her mother was interviewed, as well as other CAP officials.

“She’s not going to let anyone rule over her…and she has loyalty to Hillary because Hillary is the one who made her,” she said.

“Those Bernie brothers are attacking her all the time, but she lets them have it, too,” she added. “She says Sanders got a pass” in 2016, “but he’s not getting a pass this time.”

Liberal NYT columnist Paul Krugman noted the growing feud, suggesting it would be 2016 all over again: