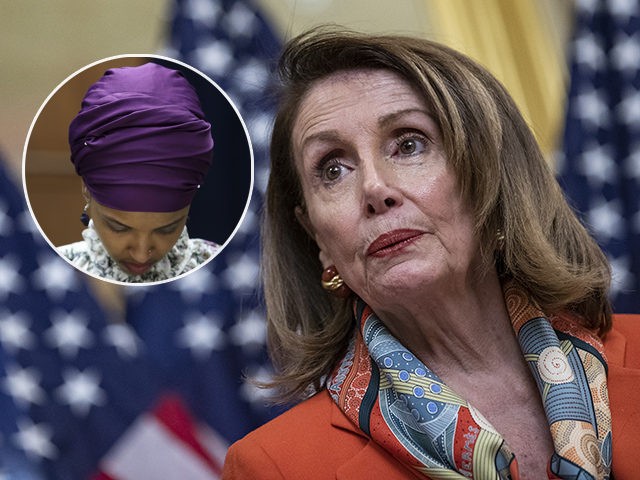 House Speaker Nancy Pelosi (D-CA) on Tuesday admitted that she does not know the content of Rep. Ilhan Omar’s (D-MN) recent remarks about 9/11 — despite offering a full-throated defense of the freshman congresswoman in the wake of criticism from President Donald Trump.

In an interview with CNN’s Christiane Amanpour, Pelosi rejected charges of antisemitism against Omar and pushed back against criticism that the Democrat Party is doing enough to combat it.

“I don’t think the congresswoman is anti-Semitic. I wouldn’t even put those in the same category,” Pelosi told interviewer Christiane Amanpour in Ireland. “We have no taint of that [anti-Semitism],” she added. “And just because they want to accuse somebody of that doesn’t mean that we take that bait.”

Pelosi also dismissed criticisms that she hasn’t done enough to defend Omar, conceding, “Until I talk to somebody, I don’t even know what was said.”

“I do know that what the president did was not right,” she added.

Omar is facing blowback for downplaying the September 11, 2001, terror attack, describing it last month private fundraiser for  Council on American-Islamic Relations (CAIR) as a day on which “some people did something,”  before adding “and that all of us were starting to lose our civil liberties.”

In reaction to the Minnesota Democrat’s remarks, President Trump shared a video to social media of Omar’s remarks and scenes of the World Trade Center engulfed in flakes shortly after it was attacked by radical Islamic terrorists. The video’s caption reads: “WE WILL NEVER FORGET!”

WE WILL NEVER FORGET! pic.twitter.com/VxrGFRFeJM

“She’s got a way about her that’s very, very bad, I think, for our country. I think she’s extremely unpatriotic and extremely disrespectful to our country,” the president said at an event in Minnesota on Monday.

Several Democrats, including Rep. Alexandria Ocasio-Cortez and 2020 Democrat candidate Robert Francis “Beto” O’Rourke, said President Trump was inciting violence against Omar by tweeting the clip. In a statement Saturday, Pelosi demanded the president remove the video and said Capitol Police are conducting a security assessment to safeguard Omar amid a growing number of death threats.

“Following the President’s tweet, I spoke with the Sergeant-at-Arms to ensure that Capitol Police are conducting a security assessment to safeguard Congresswoman Omar, her family and her staff. They will continue to monitor and address the threats she faces,” Pelosi said.

“The President’s words weigh a ton, and his hateful and inflammatory rhetoric creates real danger. President Trump must take down his disrespectful and dangerous video,” she added.