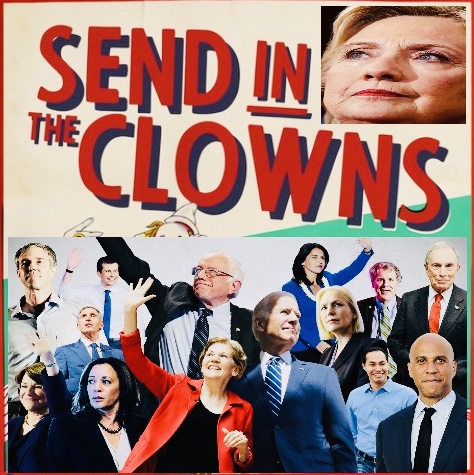 “Overwhelming” is the only word which properly describes the growing list of 2020 Presidential candidates vying to unseat Donald Trump. To date, there are the officially declared, the yet to declare, and a handful of teetering outliers. The outliers aren’t in the running per se, but in the event no Democrat is able to garner the party nomination, one of them might be persuaded to step up to the podium.

So far, it’s a very crowded field of 18 people; some of whom have no national name recognition but are pandering for votes and shilling for campaign donations in unison.  And therein lies the problem. While there is no clear frontrunner, there is a defined chasm of ideological differences: Socialism versus traditional Democrats. A far left sociopolitical demographic of the Democrat party has emerged and they are fierce. Furthermore, the once shared universal message for liberal voters has been set aside in favor of identity politics, giving rise to single-issue factions. And while the Democratic party’s preeminent goal is removing Donald Trump from the Oval Office, unification of liberals will remain elusive and perhaps, philosophically impossible. Centrist Democrats have fled in numbers which can’t be ignored and should one of the declared far-left candidates get the nomination for 2020, it will be challenging to lure moderate liberals back into the fold; especially in a time of economic prosperity and phenomenal job growth.

This group of seven holdouts, having made public claims of Presidential aspirations, have yet to make it official.  Howard Schultz has declared himself a potential challenger for the White House but pledged not to run under the Democrat banner. He says he’ll run as an independent; throwing the proverbial monkey wrench into the process. There is no doubt Schultz will divide the Democrat vote; most likely appealing to moderates who won’t support avowed Socialist Bernie Sanders. Joe Biden’s foray back into the public square has been less than stellar, due to the “Me, Too” movement backlash and the swirling controversy about his (and his son’s) part in Ukrainian business deals. Abrams, Bullock, Bennet, McAuliffe, and Moulton are stymied as 2nd -tier candidates lacking campaign staff and having no big donors nor war chests of money to kickstart a campaign. Which leaves the outliers, a motley mix of malcontents and miscreants.

Each of these five people have announced they are not in the running, but if chaos ensues at the Democrat National Convention in July 2020 and no clear victor is determined, it isn’t inconceivable for an outlier candidate to volunteer in an attempt to quell the confusion. With the exception of Tom Steyer, who has never run for public office but has led a doggedly determined, well-funded, yet unsuccessful effort to impeach Donald Trump, it’s possible that either de Blasio, Kerry, Clinton, or Holder could be called up for duty. Never rule out the improbable, despite the fact that each of these misfits is shackled by notorious political malfeasance. That didn’t stop Hillary Clinton from her White House quest in 2014 and it won’t stop her a third time; if the opportune moment arose.

Finally, there’s an outside possibility that someone yet to be named is lurking in the weeds. Maybe it’s Michelle Obama? Don’t scoff — it’s foolish to automatically dismiss her candidacy. Despite her protests on more than one occasion; stating she has no desire to return to the political arena, the former first lady hasn’t fled the media spotlight since departing the White House. She’s well liked, she has name recognition, and she’s able to check off two important boxes: she’s a woman and she’s black. Michelle Obama also has moxie, political campaign experience, and most importantly, she would absolutely and without a doubt rally the Democrat party at a critical time when there are a plethora of candidate to choose from, but not one of them is a shining star.