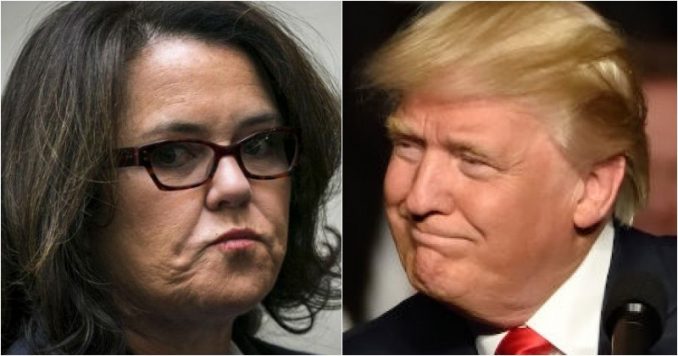 Rosie O’Donnell is leading the massive meltdown by the Hollywood crowd over today’s release of the Rober Mueller Special Counsel report. Today, Attorney General Bill Barr had a press conference outlining the details of the report and making it clear President Donald Trump is 100% innocent of any crime, and the hefty comedian freaked out saying, “Impeach the m*ther-f*cker!” Well, Trump torched her and all of the crybabies who are upset that he is innocent. You’ll love this.

This is the day Rosie O’Donnell has been anticipating for over two years. The 57-year-old Trump-hater has been glued to Rachel Maddow’s show, hoping beyond hope that the MSNBC host’s conspiracy theory about the Trump-Russia collusion would pan out. Today, that last shred of hope was smashed by AG Bill Barr.

Barr stated: “The investigation did not establish that members of the Trump Campaign conspired or coordinated with the Russian government in its election interference activities.” Barr went on to say that “no Americans were found to conspire with Russia.”

ATTORNEY GENERAL BARR: “there was relentless speculation in the news media about the President’s personal culpability. Yet, as he said from the beginning, there was in fact #NoCollusion.” pic.twitter.com/5MQmucjmVu

Most people are aware Mueller’s investigation was bogus, and so the 19 pro-Hillary lawyers Mueller hired had to come up with something since they wasted two years and $35 million dollars. They knew from day one there was no collusion, so they attempted to frame Trump for obstruction of justice.

Knowing he was innocent, the report says Trump was “upset and angry.” Well, of course, he was. He lashed out at his inner circle. “The report outlines how many times ‘terrible Trump’ lashed out over the past two years to his closest advisers about the damn ‘witchhunt,”‘ reports the Conservative Treehouse.

“It outlines every time he asked someone if he could do something to stop it…  It outlines everything about how Trump wanted that ‘damned ridiculous investigation’ to be done with,” the CTH adds.

Well, what is the acceptable reaction of an innocent man, who is facing the reality that his enemies in high places are attempting a soft coup? Regardless, the bottom line is Trump was cleared of all charges, even though the mainstream media is already saying Nancy Pelosi can now impeach him over the times he lashed out at his inner circle.

Ridiculous! They are calling that “obstruction of justice” even though he was also cleared of those charges. An innocent man can’t obstruct justice, period.

That brings us to Rosie O’Donnell who has been on a tweetstorm all morning over the Mueller findings. Rosie’s tweet-storm during Barr’s press conference includes: “Barr has no credibility-zero. It looks like a cover-up. What a charade. Trump is a traitor.” For good measure, she also used hashtags #poorDonald and #ImpeachTheMF.

Well, the president torched the naysayers like O’Donnell. President Trump declared victory over the media in the “spying” narrative, citing a new poll finding more Americans agreeing with his view that the Obama administration “spied” on his campaign than with the left-leaning media’s insistence that there’s “nothing to see here.”

“Trump was quoting former Daily Wire writer John Nolte’s report for Breitbart on a new poll finding that a plurality of Americans agree with Trump and Attorney General William Barr that the Obama administration effectively “spied” on his campaign,” reported the Daily Wire.

But that’s not all. Trump really burned poor Rosie and her one million Twitter followers by posting this tweet after AG Barr declared he was innocent. Using the “Game of Thrones” theme, the president’s tweet says, “No Collusion, No Obstruction. For the Haters and the Radical Left Democrats. GAME OVER.”

And Americans loved Trump’s tweet and were celebrating online. “Random White Guy” tweeted a picture of Pelosi, Jerry Nadler, and Adam Schiff, and using the same “Game of Thrones” theme, he said, “To all the liars, conspirators and traitors: GAME ON!”

“What you’re seeing is unprecedented desperation from the left. They went all in on a collusion conspiracy that never existed, didn’t get the result they wanted, and now they’re throwing manufactured controversies at the wall to see if anything sticks. It won’t work. #NoCollusion,” tweeted Senator Mark Meadows.

What you’re seeing is unprecedented desperation from the left. They went all in on a collusion conspiracy that never existed, didn’t get the result they wanted, and now they’re throwing manufactured controversies at the wall to see if anything sticks. It won’t work. #NoCollusion

Now, it’s time we find out how this entire debacle got started and bring those deep state rats to justice. Today was a great day for all Americans. Who in their right minds hopes and prays the president is colluding with a foreign power? Well, people like Rosie O’Donnell.

The mainstream media gaslighted the American people for two years, reporting fake news and feeding those lies to those like O’Donnell who have no sense of reality in America. They will continue to lie about our president. Now, we can say without any doubt they are deluded and should be branded “collusion truthers.” Game over. Trump wins.

One thought on “Rosie Says ‘Impeach The M*ther-F*cker’ After Mueller’s Findings, Trump Torches Her”