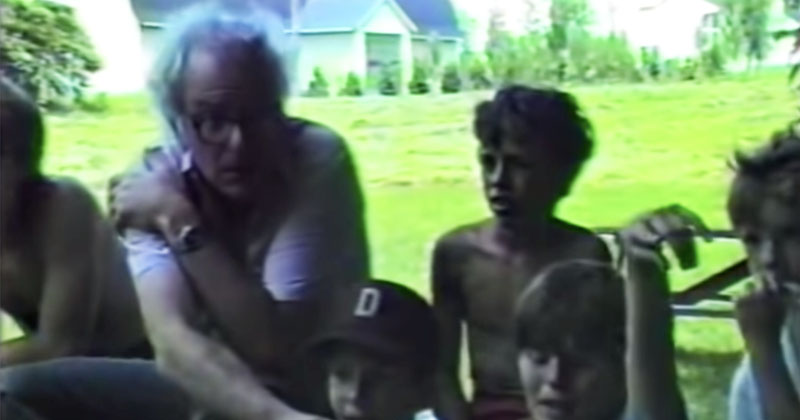 Vermont Sen. Bernie Sanders, a 2020 presidential candidate, once asked a group of children if they had ever seen cocaine and if they smoked cigarettes when he was the mayor of Burlington, while talking to kids as a part of his old television show.

In an episode of Sanders’s show “Bernie Speaks with the Community,” which was created in the 1980s, he is sitting on top of a wooden picnic table with a microphone speaking with a group of children about a variety of issues, with a focus on drugs. Politico obtained footage of the show and released it Friday.

“Do any of the older kids you know have some problems with drugs?” Sanders asked the children. “Who wants to talk to me about that? What about drugs? Is that a problem?”

“Tell me about that,” Sanders asked.

“Oh, Coca-Cola. Alright, but who knows about cocaine?” Sanders continued.

“Anyone ever seen cocaine? Do any of the kids know people who use drugs like that?” Sanders asked. “You don’t have to tell me who, but I bet you do.”

A couple children at the table said they might have seen cocaine, and he cut them off.

“Hold it!” he said, later adding the drug “screws up your mind,” before changing the subject to cigarettes, asking the children, “Who here smokes?”

“Come on, raise your hand.”

“I don’t smoke because I’m a little kid,” a child sitting in someone’s lap responded. “I’m only 5 years old.”

Sanders is a front-runner in the 2020 presidential fight, with a crowded field of Democrats who hope to take on President Donald Trump. However, Sanders’s former press secretary decided to join former Vice President Joe Biden’s 2020 campaign for president, deciding to not work for her former boss.

Trump accused the Democratic National Committee of conspiring to oust Sanders from the 2020 Democratic primary in an April tweet.

Bernie Sanders appears to be ok with the possible physical attacks on Kaitlin Bennett due to his rhetoric and characterization of Kaitlin and Infowars. Alex exposes this false narrative smear from the left.