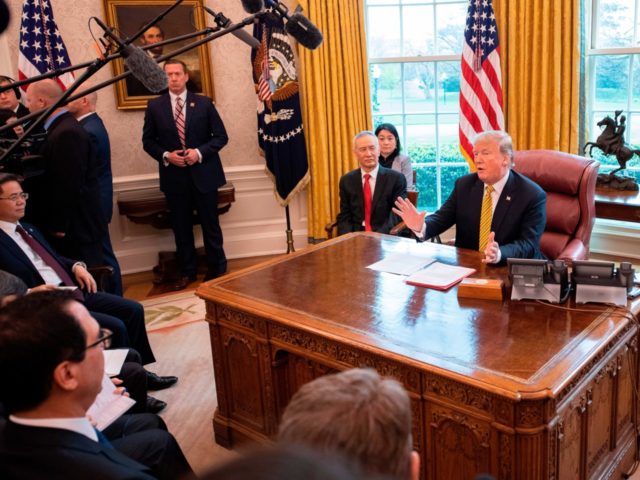 President Donald Trump defended his decision to level tariffs on China, warning them on Monday to come back to the negotiating table.

“I say openly to President Xi & all of my many friends in China that China will be hurt very badly if you don’t make a deal because companies will be forced to leave China for other countries,” Trump wrote on Twitter. “Too expensive to buy in China.”

Trump lamented the proposed deal with China fell short after the country’s leaders reneged on the necessary framework.

“You had a great deal, almost completed, & you backed out!” Trump wrote.

Trump argued that more American companies would shift away from doing business with China as a result of the tariffs.

“Many Tariffed companies will be leaving China for Vietnam and other such countries in Asia,” he wrote. “That’s why China wants to make a deal so badly!”

Trump also defended his tariffs, arguing that American consumers would not suffer as a result.

“Their (sic) is no reason for the U.S. Consumer to pay the Tariffs, which take effect on China today,” he wrote. “This has been proven recently when only 4 points were paid by the U.S., 21 points by China because China subsidizes product to such a large degree.”

He said that the best idea for Americans was to buy products from the United States instead of China.

Trump also celebrated the first quarter 3.2 percent GDP, claiming that the tariffs on China actually helped the growth of the economy.

“The unexpectedly good first quarter 3.2% GDP was greatly helped by Tariffs from China,” he wrote. “Some people just don’t get it!”