The USS Abraham Lincoln carrier strike group made its way through the Suez Canal on Thursday entering the Red Sea and the heart of the Middle East, while a US bomber task force consisting of four nuclear-capable B-52s landed on the same day at a US airbase in Qatar. The two military deployments have placed the threat of a major and catastrophic new war in the region on a hair trigger. 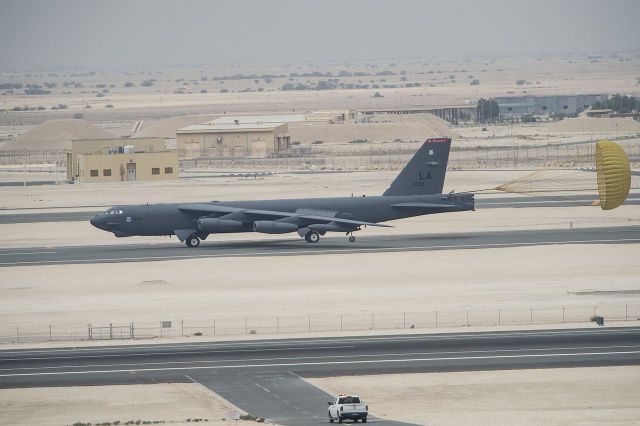 The deployments come in the midst of a new round of bellicose threats from Washington. Secretary of State Mike Pompeo issued a statement on Thursday warning that the US is prepared to take “swift and decisive” military action against Iran.

With the Pentagon bringing its most destructive and powerful weapons to Iran’s shores, Pompeo justified the US military buildup by claiming that Iran had “engaged in an escalating series of threatening actions and statements in recent weeks.” He did not bother to provide any example of such actions and statements.

“The regime in Tehran should understand that any attacks by them or their proxies of any identity against US interests or citizens will be answered with a swift and decisive US response,” Pompeo said. “Our restraint to this point should not be mistaken by Iran for a lack of resolve. To date, the regime’s default option has been violence, and we appeal to those in Tehran who see a path to a prosperous future through de-escalation to modify the regime’s behavior.”

The talk of US “restraint” as opposed to a supposed Iranian “default option” of violence beggars belief. Pompeo speaks for a government that has been engaged in unending wars in the Persian Gulf region for the last 25 years, wars that have claimed well over one million lives and left entire societies in ruin.

As always, US imperialism is attempting to cast itself as the victim of aggression, mobilizing its unmatched military might only as an act of defense.

Pompeo’s remarks were echoed by those of the recently appointed chief of the US Central Command (CENTCOM), which is responsible for US military operations in the Middle East, Marine General Frank McKenzie, who delivered an inflammatory address to the right-wing, pro-Zionist think tank, the Foundation for Defense of Democracies.

“Any attack on US interests will be met with unrelenting force,” the general told the Foundation, which was used by George W. Bush as a forum for defending his war policy against Iraq. Reflecting the bipartisan support for US imperialist aggression in the oil-rich Middle East, the think tank includes on its advisory board Donna Brazile, the former chairperson of the Democratic National Committee.

The Trump administration, meanwhile, has imposed yet another round of sanctions against Iran. On Wednesday, the White House issued an executive order imposing unilateral and extra-territorial sanctions against Iran’s iron, steel, aluminum and copper industries, threatening anyone trading in the materials as well as any financial institution facilitating such trade with US retaliation, including exclusion from American markets.

These new sanctions follow Washington’s termination on May 1 of waivers granted to China, South Korea, Japan, India and Turkey, countries that had been allowed to continue purchasing Iranian oil without being sanctioned. The stated US aim is to reduce Iranian oil exports to “zero.”

Just one year ago this month, the Trump administration unilaterally abrogated the so-called Joint Comprehensive Plan of Action (JCPOA) reached between Iran and the US, Russia, China, Germany, the UK and France, and both re-imposed and escalated unilateral US economic sanctions aimed at strangling the Iranian economy and creating the conditions for toppling its government and replacing it with a puppet regime.

Meanwhile, the US Maritime Administration (MARAD) issued an advisory on Thursday warning US commercial ships, including oil tankers, that they could be targeted in the growing buildup to war in the Persian Gulf. Given the crippling embargo that Washington is mounting against Iranian oil exports, the advisory warned:

“Iran or its proxies could respond by targeting commercial vessels, including oil tankers, or US military vessels in the Red Sea, Bab-el-Mandeb Strait, or the Persian Gulf. Reporting indicates heightened Iranian readiness to conduct offensive operations against US forces and interests.”

This advisory, like Pompeo’s warnings, is an unmistakable provocation, aimed at creating a pretext for an all-out US war.

Pompeo and US National Security Adviser John Bolton, who has publicly called for bombing Iran, have both threatened that the US will unleash a devastating attack on Iran against any and all attacks on US troops or “US interests” anywhere in the Middle East by a host of actors deemed by Washington to be “proxies” of Tehran, ranging from Shia militias in Syria and Iraq to the Houthi rebels in Yemen, Hezbollah in Lebanon and Hamas in the Palestinian Gaza Strip.

In any one of these countries, the Pentagon or the CIA, or, for that matter, Washington’s principal regional allies, particularly Israel and Saudi Arabia, which both want a US war against Iran, are capable of staging a provocation that could be used as a pretext for launching a war.

The officials told NBC that the session was not convened to discuss the supposed “intelligence” about alleged Iranian plans for attacks on “US interests” that served as the pretext for the dispatching of the carrier battle group and the bomber strike force to the region. The evidence to substantiate the claims of impending Iranian “aggression” is as fabricated as that used to bolster the claims about “weapons of mass destruction” in advance of the 2003 US invasion of Iraq.

What were these officials talking about in the CIA’s bunker in Langley? Former CIA operations officers and military officials told NBC that such meetings at CIA headquarters are normally convened to discuss highly sensitive plans for “covert actions.” Whether such actions will be aimed against Iran and its government, or at staging a “false flag” operation somewhere in the Middle East that can be used as the pretext for a US attack remains to be seen.

The recklessness and criminality that characterize Washington’s threats against Iran are an expression of the deep-going social tensions, economic instability and political crisis gripping American capitalism, which the ruling financial oligarchy seeks to divert outward in an explosion of military violence.

A war against Iran would eclipse the horrific bloodshed of the Iraq war launched in 2003, drawing in the entire region and all of the major powers, including US imperialism’s so-called “great power” rivals Russia and China, bringing humanity face-to-face with the threat of a nuclear Third World War.