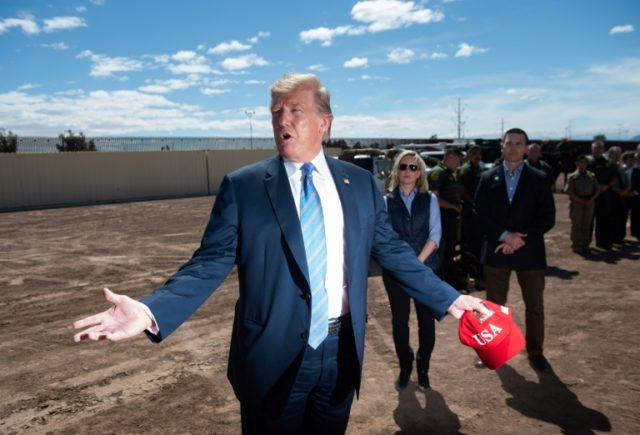 Ahead of the 2020 presidential election, Republican voters say President Trump’s top priorities ought to be building a wall along the United States-Mexico border and reducing all immigration to the country.

The latest Harvard/Harris Poll finds that when Republican voters are asked to rank the issues which should be Trump’s biggest priorities, building a wall at the southern border and reducing all immigration top the list.

Ranking as the top priority for Republicans, conservatives, and Trump supporters, 22 to 25 percent of these voters said building a wall along the U.S.-Mexico border should be the president’s number one goal today.

Reducing all immigration — both illegal and legal — to the U.S. is ranked as the second top priority for Republicans, conservatives, and Trump voters. Between 19 and 20 percent of these voters said reducing the inflow of immigrants should be Trump’s second top priority.

Recent polls found similar popularity for reducing all immigration to the U.S. among GOP voters and conservatives. In a Reuters/Ipsos Poll last month, GOP voters called immigration the “most important problem” facing the nation and a Harvard Institute of Politics poll found that young GOP voters were the most skeptical of immigration.

Similarly, a recent Fox News poll revealed that a plurality of 43 percent of Republican voters said immigration hurts the U.S.

Republican voters’ support for reducing legal immigration levels — at which about 1.2 million legal immigrants are admitted to the U.S. every year — is a direct rejection of the big business interests’ and GOP donor apparatus’s lobbying for more legal immigration.

Chamber of Commerce President Tom Donahue, for example, most recently claimed that the U.S. was “out of people” and thus needed to import additional foreign workers to compete against America’s working and middle class for jobs.

Extensive research by economists like George Borjas and analyst Steven Camarota has found that the country’s current mass legal immigration system burdens U.S. taxpayers and America’s working and middle class while redistributing about $500 billion in wealth every year to major employers and newly arrived immigrants. Similarly, research has revealed how Americans’ wages are crushed by high immigration levels.