The US is closer to war with Iran than it has been since the Bush years, or perhaps ever. And Bolton is largely to blame 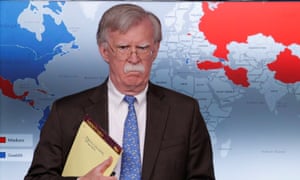 We know this because he has been saying it for nearly two decades.

And everything that the Trump administration has done over its Iran policy, particularly since Bolton became Trump’s top foreign policy adviser in April of 2018, must be viewed through this lens, including the alarming US military posturing in the Middle East of the past two weeks.

Just after one month on the job, Bolton gave Trump the final push he needed to withdraw from the Iran nuclear agreement, which at the time was (and still is, for now) successfully boxing in Iran’s nuclear program and blocking all pathways for Iran to build a bomb. The Joint Comprehensive Plan of Action (JCPOA) – as the Iran deal is formally known – was the biggest obstacle to Bolton’s drive for a regime change war, because it eliminated a helpful pretext that served so useful to sell the war in Iraq 17 years ago.

2 thoughts on “Is John Bolton the most dangerous man in the world?”