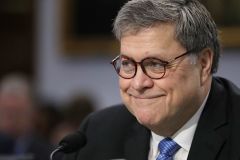 “Why is it so hard to figure out?” Fox News’s Bill Hemmer asked Barr during the attorney general’s trip to El Salvador:

There are two things here. One, no one’s really looked at it. I think there’s a misconception out there that we know a lot about what happened.

The fact of the matter is, Bob Mueller did not look at the government’s activities. He was looking at whether or not the Trump campaign had conspired with the Russians. But he was not going back and looking at the counter intelligence program.

And we have a number of investigations underway that touch upon it. The main one being the Office of Inspector General that’s looking at the FISA warrants.

But as far as I’m aware, no one has really looked across the whole waterfront.

Barr started his job as attorney general on Feb. 14, and he said he thought his questions about the Trump-Russia investigation “would be readily answered.”

“But I haven’t found that to be the case,” he said.

“What I will say is that I’ve been trying to get answers to questions, and I found that a lot of the answers have been inadequate, and I have also found that some of the explanations I’ve gotten don’t hang together. So in a sense, I have more questions today than I did when I first started.”

Barr said it’s important to get the questions answered:

“Well, because I think people have to find out what the government was doing during that period. If we’re worried about foreign influence, for the very same reason we should be worried about whether government officials abused their power and put their thumb on the scale. And so I’m not saying that happened, but I’m saying we have to look at that.”

Barr also said the “interesting” thing about the Trump-Russia investigation is that it was “handled in a very senior level of these departments. It wasn’t handled in the ordinary way that investigations or counter-intelligence activities are conducted. It was sort of an ad hoc small group. And most of these people are no longer with the F.B.I. or the C.I.A. or the other agencies involved.

Barr said the IG report is not yet finished, but the public will see it when it is.

The liberal media are terrified of the truth, especially when it leads to uncomfortable questions about their own leftist worldview.

CNSNews covers the stories that the liberal media are afraid to touch. It drives the national debate through real, honest journalism — not by misrepresenting or ignoring the facts.

CNSNews relies on the support of our loyal readers to keep providing the news and commentary that matter to the American people, not just stories that prop up the liberal agenda.

Make a donation today. Just $15 a month would make a tremendous impact and enable us to keeping shining the light where the liberal media are afraid to tread.