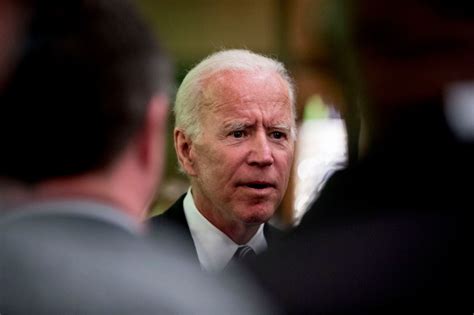 Sen. Bernie Sanders, I-Vt., plans to enjoy ice cream with New Hampshire voters to celebrate Memorial Day. He won’t be far from former Rep. John Delaney, D-Md., another presidential candidate, who’s in the midst of his 19th trip to the state and plans an itinerary that includes four barbecues, one parade and a wreath-laying.

In Iowa, Sen. Cory Booker, D-N.J., is rolling through the cornfields in an RV, while Sen. Kirsten Gillibrand, D-N.Y., unveils a “Family Bill of Rights” and tours an ethanol plant.

And here’s former Vice President Joe Biden’s agenda for the holiday weekend, according to his campaign: “Joe Biden has no public events scheduled.”

Those seven words are becoming familiar for the Biden team. Aside from a campaign swing right after announcing his candidacy, Biden has kept his head down while his rivals rush from state to state to state. Even when he has held public events, they have included only a handful of questions from voters or reporters.

The light public schedule reflects the unique position of his campaign, advisers say: With near universal name recognition and high favorability ratings among Democrats, the former vice president does not need to introduce himself to voters like nearly every other candidate. And as the leader in early polls, he can attract media attention without splashy events.

But there are risks. Voters in the early primary states – especially Iowa, with its caucus system that rewards on-the-ground organizing – want to see the candidates personally and often. And there is the danger that Biden’s schedule could reinforce a word President Donald Trump is already using to describe his candidacy: sleepy.

Biden’s campaign says that’s not going to happen. “I have zero worry that any voter will leave a Joe Biden event with doubts about his energy,” said Kate Bedingfield, his deputy campaign manager. “They’re going to see it everywhere he goes.”

Biden spends 30 minutes to an hour greeting voters on a rope line after his public events, Bedingfield said.

But after a short burst of activity in the early primary states, his schedule the past two weeks or so has mostly involved fundraisers, which – while publicly announced and attended by a pool reporter – are far different from open campaign events.

It’s not clear how long Biden can continue to limit his public exposure in this way. The first Democratic debate is June 26 and 27, and Biden will share the stage with nine rivals and a moderator, each eager to press him on his positions and record. Other debates follow, while influential groups ranging from labor unions to ethnic organizations are hosting multicandidate events and may not take kindly to being skipped.

For now, however, the strategy appears to be working. Biden’s carefully crafted three-part campaign launch went off without an obvious hitch, and the polls so far give him a comfortable lead in the fractured field of 23 Democratic contenders.

Some Democratic strategists say Biden, 76, may be limiting his participation in freewheeling campaign sessions partly to play down the fact that he is older than the figure they may remember.

“Voters are going into events with him expecting ‘Uncle Joe,’ but they come out having seen ‘Grandpa Joe,’ ” said Rebecca Katz, a Democratic strategist who favors liberal candidates and is not working for a presidential campaign.

She said Biden is benefiting from his association with former President Barack Obama, who remains popular with many Democrats. “The more people see him live in 2019, the more they realize he might not be the guy the remember from 2008,” Katz said.

Since entering the race four weeks ago, Biden has held 11 public events, according to his campaign. Former Rep. Beto O’Rourke, D-Texas, held nearly four times that number in the same period, according to schedules. And Gillibrand, who is lagging in the polls, planned 11 stops in Iowa just over the holiday weekend.

And with the exception of O’Rourke – and unlike Biden – all of those candidates have full-time jobs in the Senate that keep them tethered to Washington most weeks.

Advisers say Biden’s public schedule reflects a thought-out strategic choice. The candidate’s time is better spent on vital but less public activities, they say, such as fundraising, one-on-one calls, policy development and the building of a campaign infrastructure.

“It’s definitely an advantage that he can pace himself and do events that matter, rather than just doing events that traditionally are used to prove yourself,” said Larry Rasky, who worked on Biden’s earlier presidential campaigns but has no formal role this time around. “He’s in a different place than the other candidates.”

So far, Biden is taking a pass on the multicandidate forums sponsored by various interest groups, which have become a staple of the early campaign for his rivals. They have allowed some of the hopefuls to show off their policy chops in front of an engaged audience and generate buzz and momentum.

Organizers with MoveOn, a prominent liberal activist group, said Biden is not coming to their Big Ideas forum next weekend in San Francisco, which will feature eight other candidates. And he will skip the California Democratic Party Convention the same weekend, which will host 14 candidates.

Regarding the Iowa Democratic Party dinner next month, 17 candidates have said they’re coming – but not Biden. And he also has passed on the more exclusive Black Economic Alliance presidential forum in Charleston, South Carolina, which sent out seven invitations, organizers say.

Similarly, the cable networks have been holding hourlong town hall sessions in which voters can question individual candidates. Biden has given no indication that he plans to take part in one.

Some activists worry that by skipping such forums, Biden is able to avoid defining where he stands on the details of policies such as trade, health care, the environment and criminal justice. But Biden’s team says he is simply being careful to choose the right venues.

“There are a tremendous amount of them,” Bedingfield said of these sessions. “The organizers of the events understandably try to create a sense that missing their event is the biggest mistake that a candidate could make. But there are a countless number of these in any given week, and you have to be smart about how you’re spending your time and where you’re going.”

Bedingfield said Biden and his wife, Jill Biden, do plan to attend a late-June town hall at the organized by the American Federation of Teachers, a powerful union that is hosting events across the country for all of the Democratic presidential hopefuls.

“I don’t think any voter or any activist will have any questions about where Joe Biden stands on any issue,” she said. “His schedule is and will be driven by him talking on his own terms about his policy positions and his vision for the country.”

Some veterans of previous campaigns said that limiting public exposure can have the opposite effect, restricting a candidate’s ability to set the terms of the discussion. When a candidate isn’t in public much, they said, the pressure builds so every word, pause and gesture is scrutinized, sometimes not in ways that are intended.

“The upside for front-runners is they are always going to be covered,” said Robby Mook, who was Hillary Clinton’s 2016 campaign manager. “The curse of always being covered is it’s not always what you want it to be about.”

In such cases, Mook said, the coverage tends to be about process and how well the candidate is doing in the polls. “It can be tricky to stay focused on what you want to talk about,” he said.

Democratic officials in important campaign states, meanwhile, are noticing that Biden hasn’t been around as much as the other candidates.

“He was here the very first day, for his first event,” said Bret Nilles, chairman of the Linn County Democrats in Iowa. “But besides that, we haven’t really heard much from him at all.”

In a sense, Biden, who first ran for president in 1988, has been campaigning for decades, and some Democrats say that relieves much of the pressure.

“We have not seen Joe Biden yet. He has a lot of history here, though,” said Sarah Mahler, chair of the Washoe County Democrats in Nevada. “A lot of us have our pictures with him, or some story with him.”