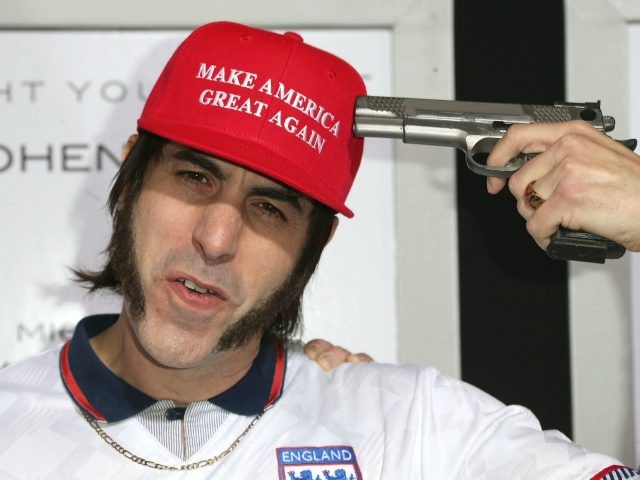 Actor Sacha Baron Cohen claims that Donald Trump would not be President of the United States today if he did not have a Twitter account to “spread lies” and corral “racists,” “white supremacists,” and murderous supporters. The actor also acknowledged that he is “a comedian,” adding, “I don’t really know what I’m talking about.”

“[The internet] allows people who are spreading lies to actually seem like they’re legitimate — and what’s the effect of somebody who’s kind of spreading lies with these new means of proliferating Twitter?” said Baron Cohen in an interview with Don Cheadle to discuss his new Showtime series, Who Is America?

During his interview, the Brüno actor called out Twitter CEO Jack Dorsey for not banning enough people on his social media platform, and for visiting the White House to meet with President Trump last month.

“Trump, without Twitter, probably would not have become president, which is why Jack Dorsey is in the White House having a meeting with Trump,” insisted Baron Cohen, “So, what’s fascinating about that is — [Dorsey’s] sitting opposite the president, who is actually the biggest celebrity endorser of his corporation.”

Baron Cohen went on to claim that Dorsey is not banning “racists” and “white supremacists” from Twitter because he believes it might affect his “cash cow,” as well as his “whole business model.”

“If they get rid of the racists, they’re going to have less Twitter subscribers,” said the English actor, who suggested that Twitter is not the place for freedom of speech.

“In society, you know, we want to be biased against those who want to kill people like you and people like me,” said Baron Cohen in a bizarre statement characterizing Trump supporters as racist murderers, “It’s okay to not give those people, who want to murder people for being different, absolute rights.”

“We’re living in a dangerous society now,” continued the Borat actor, “We’re living in a society where the space that we grew up in — which is the idea that society is getting better, where black people can get full rights, they can vote, where people are equal despite their differences — that concept is being disintegrated.”

“Democracy is being disintegrated, and that’s terrifying for me,” said Baron Cohen, “and I’m going to say all of this with a caveat that I’m a comedian, I don’t really know what I’m talking about, but this is just the stuff that’s going on in my head.”