The report by the DHS inspector general said the health and security of both migrants and US Customs and Border Protection (CBP) officials is under threat by squeezing people into holding rooms designed for a fraction of their numbers.

“We are concerned that overcrowding and prolonged detention represent an immediate risk to the health and safety not just of the detainees, but also DHS agents and officers,” the report said.

It said inspectors found earlier in May that the El Paso Del Norte Processing Center had put 155 detainees in a cell with a maximum capacity of 35, and 41 in a room for eight people.

The limited space at the facility, which has been processing thousands of undocumented migrants every month, has made it difficult to segregate detainees with infectious diseases, it said.

“We also observed detainees standing on toilets in the cells to make room and gain breathing space, thus limiting access to the toilets,” the report said.

The CBP’s El Paso district experiences some of the highest flows of incoming migrants, part of the 100,000-plus a month who cross the US-Mexico frontier.

On Thursday President Donald Trump announced he would slap heavy tariffs on imports from Mexico to force the government to crack down on Central American migrants traveling through the country to reach the United States.

The report said that at the El Paso facility, detained migrants can wait days or even weeks “in standing-room-only conditions” to be processed. 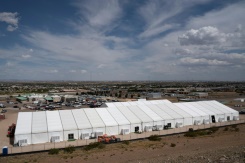 Meanwhile their suitcases, backpacks and other bags are taken away and disposed of in a dumpster because muddy, wet and possibly containing insects, they pose a “biohazard” threat.

The report suggested that conditions were so severe that morale among CBP personnel was sagging, with many reporting higher anxiety, and worries about illnesses and violence.

“Border Patrol management on site said there is an ongoing concern that rising tensions among detainees could turn violent,” the report said.

As a consequence there was a rise in accelerated retirements and job changes among staff, the report said.