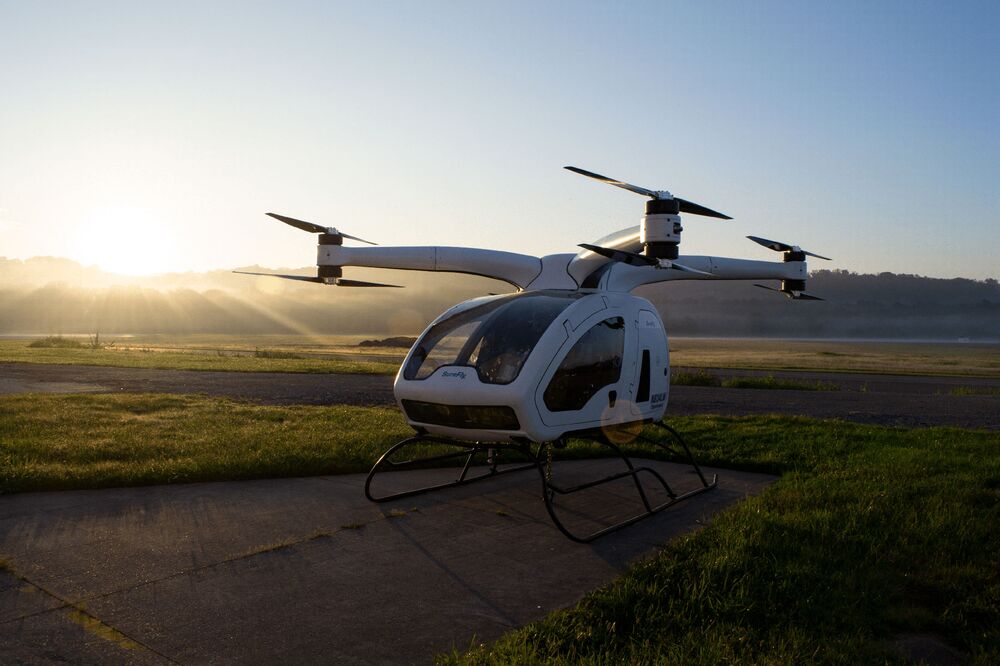 After decades playing supporting roles in sci-fi fantasies such as The Jetsons or Blade Runner, robotaxis are poised to work their way into everyday life. A host of companies has flown autonomous or semiautonomous electric aircraft that can take off vertically from almost anywhere, and the first commercial models are scheduled to hit the market next year. Here are a half-dozen that might soon fly you from your home to the office, airport, or a night on the town.

Poised to be the first to market, the vehicle is guided via a connection between a passenger’s smartphone and the company’s command center. EHang says it will start selling the $300,000 aircraft next year and anticipates strong demand from emergency responders, air taxi services, and operators of tourist flights.

Backed by automaker Daimler AG, the Volocopter features 18 rotors, nine batteries, and a parachute. With a top speed of 62 mph, it’s intended for short journeys such as airport runs. The company this year will open a “Voloport” in Singapore for public test flights and expects commercial service as early as 2021.

Small enough to squeeze into most garages, the single-seater has 16 independent rotors and a carbon-fiber body for short autonomous or self-piloted hops. The company aims to sell the Elroy to public and private customers for commuting, taxi service, deliveries, and even military missions.

The Cora has completed more than 700 test flights, mostly in New Zealand. Backed by Google co-founder Larry Page, the drone can fly as fast as 110 mph thanks to 12 independent lift fans on the wings. The company expects airlines and rideshare-like services to use the vehicle.

This hybrid can fly longer than rivals because its gasoline engine recharges the batteries. The SureFly, with folding arms for parking in a garage, will cost less than $200,000. Workhorse, a maker of electric trucks and delivery drones, says a remote-control model is in the works, but the current version requires a pilot.

The electric air taxi, powered by 36 jet engines that swivel after takeoff so it flies like a fixed-wing plane, uses 90% less energy than helicopter-like drones, giving it enough range to fly from New York to Boston. Lilium says a ride from Manhattan to the city’s airports would cost about $70 per passenger.