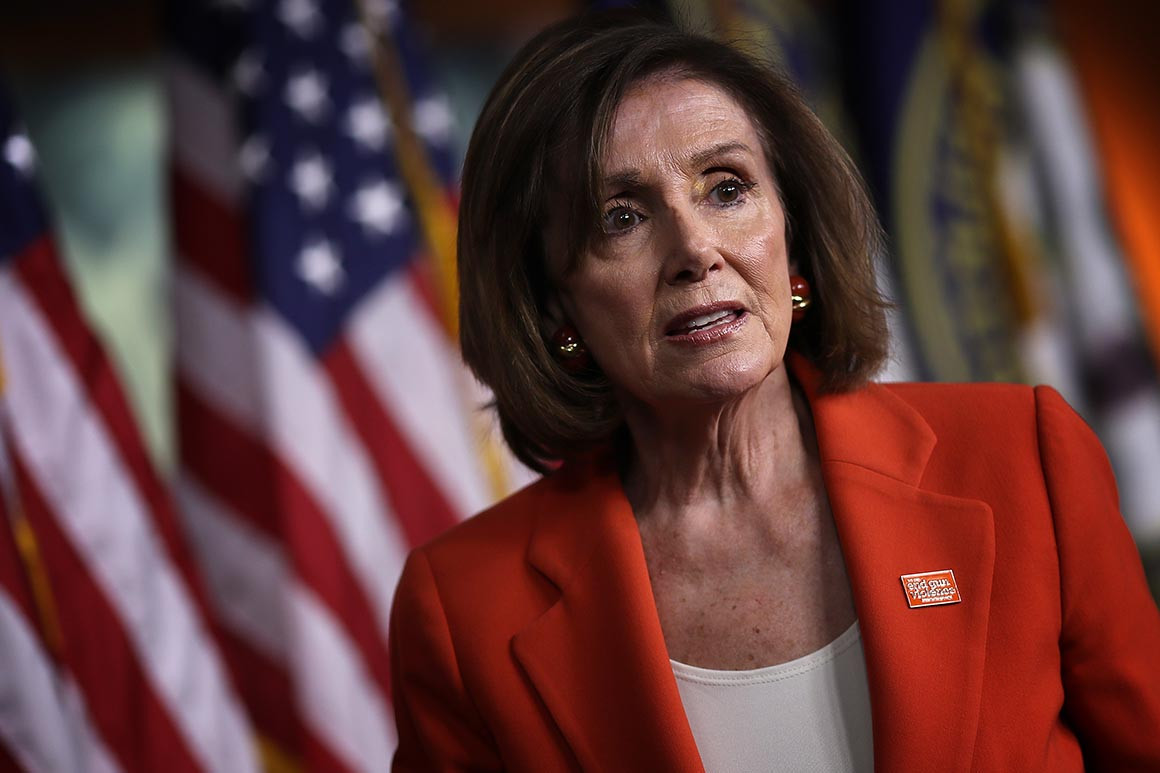 She also clashed with Judiciary Committee Chairman Jerry Nadler, who pressed her to begin impeachment proceedings.

Speaker Nancy Pelosi told senior Democrats that she’d like to see President Donald Trump “in prison” as she clashed with House Judiciary Chairman Jerry Nadler in a meeting on Tuesday night over whether to launch impeachment proceedings.

Pelosi met with Nadler (D-N.Y.) and several other top Democrats who are aggressively pursuing investigations against the president, according to multiple sources. Nadler and other committee leaders have been embroiled in a behind-the-scenes turf battle for weeks over ownership of the Democrats’ sprawling investigation into Trump.

Nadler pressed Pelosi to allow his committee to launch an impeachment inquiry against Trump — the second such request he’s made in recent weeks only to be rebuffed by the California Democrat and other senior leaders. Pelosi stood firm, reiterating that she isn’t open to the idea of impeaching Trump at this time.

They said she was expressing solidarity with pro-impeachment Democrats who want to hold the president accountable while disputing the idea that it is now time to take that step. Pelosi has long argued that certain conditions must be met before Democrats begin impeachment — public support and strong bipartisan backing, neither of which have so far materialized.

Other Democrats said Pelosi’s comment wasn’t that surprising given her previous criticisms of the president, including saying Trump “is engaged in a cover-up,” that his staff and family should stage an intervention and that the president’s actions “are villainous to the Constitution of the United States.”

Ashley Etienne, a Pelosi spokeswoman said Pelosi and the chairmen “had a productive meeting about the state of play with the Mueller report. They agreed to keep all options on the table and continue to move forward with an aggressive hearing and legislative strategy, as early as next week, to address the president’s corruption and abuses of power uncovered in the report.”

In Tuesday’s meeting, some committee chairs expressed frustration about the appearance that rank-and-file members — rather than party leaders — were leading the caucus’ oversight strategy, including what they do on impeachment, according to one source familiar with the meeting.

But not all committee leaders were supportive of the impeachment inquiry. Both Schiff and Neal argued that if Democrats are going to open an inquiry, they should also be prepared to impeach Trump, which the caucus isn’t ready to do, they said. Cummings also sided with Pelosi, according to a source.

Neal also grumbled about Democrats who have come out in favor of impeachment, saying it puts pressure on members in bordering congressional districts to explain why they don’t feel the same way. House Rules Chairman Jim McGovern (D-Mass.) — whose district touches Neal’s — came out for impeachment last week.

The meeting is just the latest example of the impeachment debate that is roiling the Democratic Caucus. Pelosi is facing continued pressure both publicly from some rank-and-file members and privately from committee leaders like Nadler, who are unhappy with the current strategy.

The gulf between Nadler and Pelosi was on full display Wednesday as the New York Democrat dodged questions about whether he and Pelosi were in agreement on Democrats’ impeachment strategy.

“We are investigating all of the things we would investigate, frankly, in an impeachment inquiry,” Nadler said on CNN. He then paused for several seconds when asked if he and Pelosi were “on the same page.”

“When that decision has to be made, it will be made not by any one individual, it will be made probably by the caucus as a whole,” Nadler added. “Certainly Nancy will have the largest single voice in it.”

Pelosi, meanwhile, is trying to publicly project unity — going so far as to defiantly declare Wednesday that “there is no controversy” within the caucus over impeachment.

In reality, the speaker and her top lieutenants have been trying to tamp down a rebellion within the caucus, as close to 60 members have publicly declared they want to begin impeaching Trump.

Trump, meanwhile, has continued to stonewall Democrats’ every attempt to investigate his administration, personal finances and charges of obstruction of justice outlined by special counsel Robert Mueller.

Party leaders have tried to relieve some of the pressure by taking more aggressive public action against the White House’s repeated defiance, including scheduling a contempt vote on the House floor next week against Attorney General William Barr and former White House counsel Don McGahn.

And Democratic leaders continue to emphasize that their methodical, step-by-step oversight process is working, pointing to recent federal court victories Democrats have secured against Trump’s efforts to block them. Nadler is also still trying to secure Mueller’s testimony before his committee.

But for a growing number of Democrats, including several members of the Judiciary Committee, opening impeachment proceedings is the only recourse.

Reps. David Cicilline (D-R.I.), Jamie Raskin (D-Md.) and Joe Neguse (D-Colo.), all members of Democratic leadership and the Judiciary panel, first raised the idea of launching an impeachment inquiry during a private leadership meeting late last month only to be shot down by Pelosi.

Nadler, Raskin and other lawmakers say opening an inquiry doesn’t necessarily result in impeachment and would strengthen their legal case as Democrats pursue Trump in court in an effort to force him to comply with their investigations. But other Democrats argue that the public wouldn’t understand the difference between an inquiry and actual impeachment, which would only further muddle the party’s message in the run-up to the election.

Pelosi has repeatedly said she doesn’t think trying to impeach Trump is “worth it,” arguing that without the public on their side, the best way to beat the president is to persuade voters to kick him out of office in 2020. She and some other top Democrats worry that pursuing impeachment would swamp their legislative agenda and embolden the Republican base, possibly costing them the House next year and ensuring Trump’s reelection.