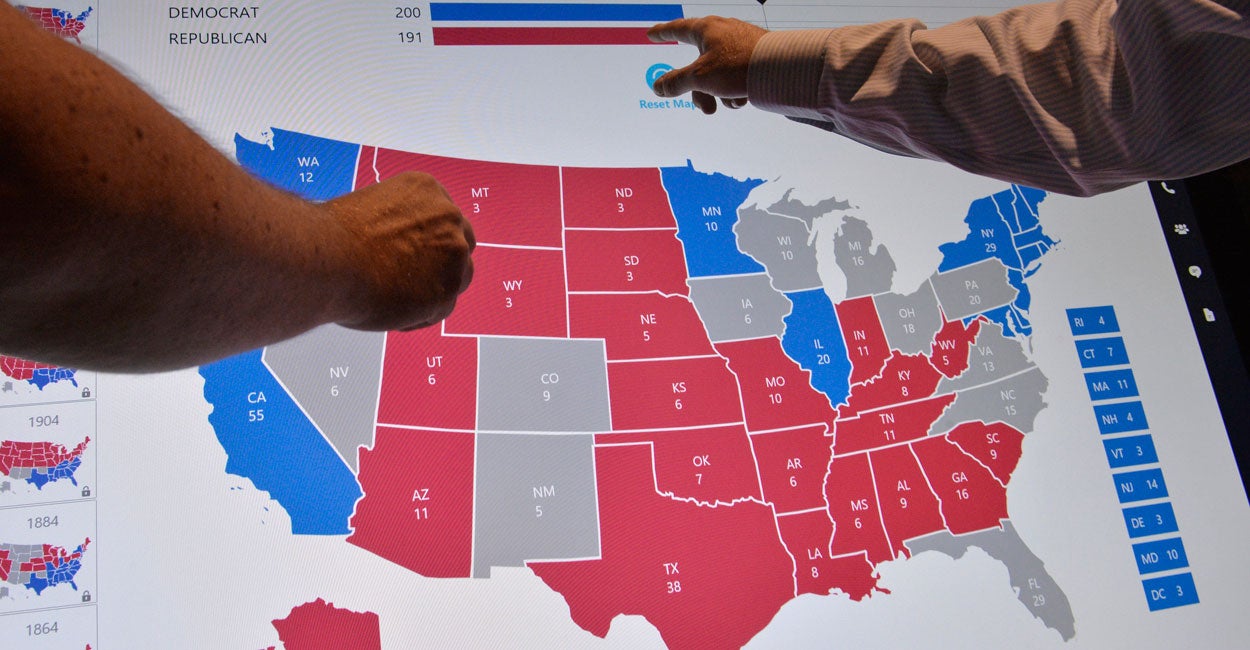 While you were sleeping, the Democrats (abetted by some deviant Republicans) have been working on a plan that would destroy the diversity of the American political system and bring the nation to the brink of civil war. The plan is called the National Popular Vote Interstate Compact, and tens of millions of dollars have already been spent over several decades trying to implement it. Fourteen blue states and the District of Columbia have already joined the Compact, which means they are 70% on the way to making their proposal the law of the land.

The Democrats’ plan is designed to eliminate the influence of the Electoral College in choosing the nation’s president, no doubt because while Hillary won the popular vote she failed win necessary votes in the Electoral College. Eliminating the influence of the Electoral College would end the diversity now embodied in the federal system with its division of powers between Washington and the fifty states. The fact that a party which presents itself as a defender of diversity should be leading the charge to eliminate the nation’s most powerful source of diversity should be all that is required to understand the threat their agenda poses to what has been the nation’s constitutional way of life for 232 years.

The Electoral College and the division of powers are features of the Constitution. But the National Popular Vote movement does not propose to amend the Constitution because it doesn’t have the votes to do that. Instead, in the name of “democracy,” it proposes to circumvent the Constitution and its requirement of large national majorities for amending what has been the fundamental law of the land. Think how Orwellian that is, and how concerning it should be for anyone believing the Founders created the most practical, realistic, democratic, diverse and successful polity the world has ever seen.

This is how the Democrats’ circumvention of the Constitution and its provision for an Electoral College would work. Instead of abolishing the College, which would require the support of two-thirds of the states, they are hoping to put together a coalition of states representing 270 electoral votes that would agree to award all their votes to whoever wins the national vote. In other words, if the popular vote is won by 10 votes, every state in the Compact would award 100% of their votes to that party, even if a majority of the voters in their state voted against them.

The bottom line (and goal) of this devious plan is to eliminate the influence of rural voters or “Middle America” and create an electoral lock for the large urban population centers, e.g., California and New York, which would then decide the direction of the country.

Currently the Electoral College forces candidates to campaign in states they might otherwise ignore, and thus forces them to compete for diverse constituencies, and therefore to compromise and moderate their positions. It was designed by the Founders to move the country to the center and to prevent an overzealous majority from tyrannizing the minority.

Consider the practical implications of this radical plan to remove an institution that has stabilized our political life for more than 200 years. The urban centers of America, which would become dominant under the plan, are also the centers of America’s crime problems and gun homicides, its intractable poverty, its failed public schools and political corruption. Do we really want to replicate for all America the failed welfare policies that have created a permanent underclass in cities like Chicago, Detroit, St. Louis, and Baltimore?

Or consider California, a one-party state whose government has defied federal law and proclaimed itself a sanctuary for illegal migrants. What will be the consequences for an already deeply divided nation of having an open-borders policy imposed by leftist states led by California and New York on Middle American states who are already fiercely opposed to flooding the country with millions of illegal aliens whom no government agency has vetted?  lf New York has legalized the killing of babies already born, how will that go down in states already banning abortions of babies with fetal heartbeats? All the blue states pushing this agenda are fans of the Green New Deal which focuses on a problem — global warming — that most of the country doesn’t consider urgent, calls for crushing new taxes to finance new social giveaways while programs like Medicare and Social Security are already on the brink of bankruptcy. Or consider the Green plan to remove 250 million gasoline-driven automobiles within ten years and replace them with electric cars. If an incredibly costly and unsettling confiscation scheme like this is imposed on the rest of the country, what can we reasonably expect as a reaction?

The Founders’ scheme to produce compromise between competing factions and to put checks and balances on radical adventures was never more needed than now, when the country is divided in a way that it has not been seen since the Civil War. But apparently this is the perfect time for an out-of-touch and increasingly out-of-control Democratic Party to undermine the constitutional foundations of the nation, push a divisive agenda, and move the nation towards a one-party state.