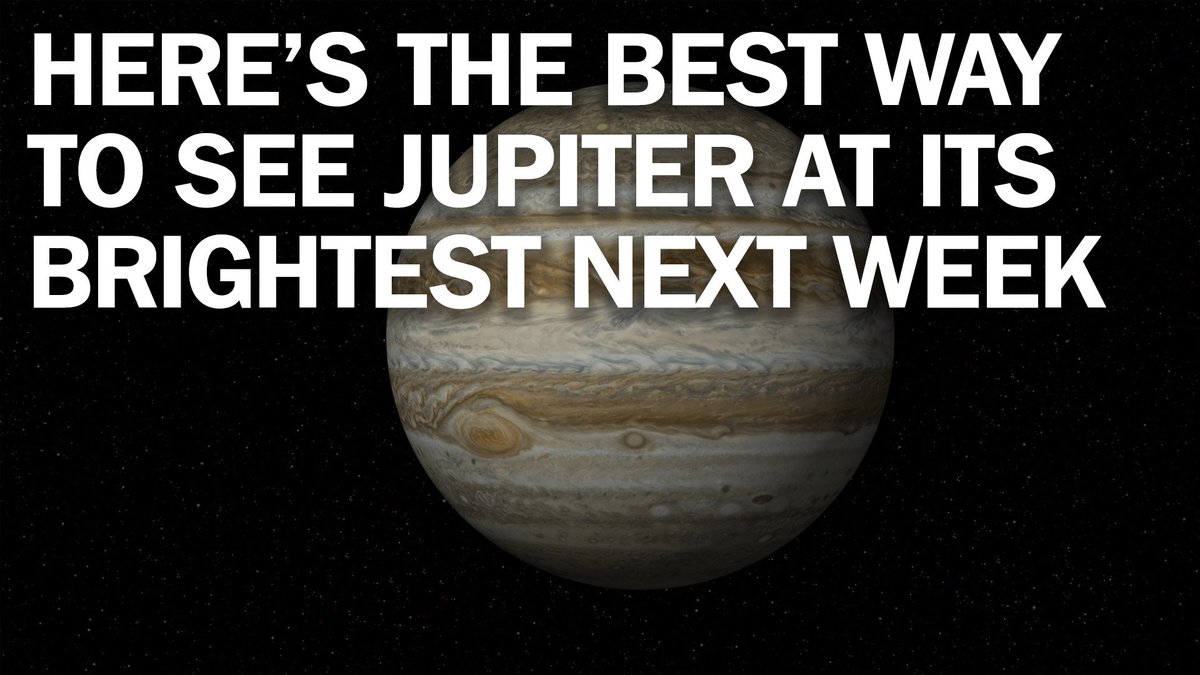 During the month of June, Jupiter will be at its biggest and brightest in the sky, offering even casual skywatchers the opportunity to get a good look at the largest planet in the solar system — with no special equipment required. Jupiter will be easily visible to the naked eye all month long, with the most ideal conditions happening next week; with a pair of binoculars you will be able to get an even more spectacular view of the planet, as well as the four largest Jovian moons.

Here is why Jupiter is so bright this month, and when and where the best place is to see it.

Why does Jupiter look so big this month?

Aside from the Sun, Jupiter is the largest celestial body in our solar system. Despite its size, the massive gas giant is usually the second brightest planet in the sky, behind the much closer planet Venus. But once a year, when Jupiter and Earth reach their closest proximity and align with one another in orbit, Jupiter will appear to outshine Venus as it rises high in the evening sky. The distance between the Earth and Jupiter varies widely throughout the year, due to the distance and speed at which the planets orbit the sun. (It takes Jupiter approximately 12 earth years to orbit the sun.) Since all the planets in the solar system orbit the sun on the same plane, imagine them as runners on a track going at varying speeds.

When is the best time to see Jupiter?

While the planet will be visible through the night all month long, the best time to see it will be between June 10th and 12th. According to Earthsky, Jupiter and Earth will be in opposition — which is the point when both planets are aligned with the sun — on June 10. This alignment occurs once a year, when Earth “laps” Jupiter in orbit.

On the evening of the 10th, Jupiter will rise shortly after the sunset, reach high into the sky before setting around dawn. It will be the brightest visible object in the sky aside from the moon.

However, since the planets have slightly elliptical orbits, the actual point in which they will be closest will be on June 12, at around 11 p.m. EST. At this point, the two planets will be separated by a mere 398 million miles. Regardless, this distinction won’t make too much of a difference for the purposes of casual viewing. And, unlike other astronomical phenomena, your geographical location on Earth shouldn’t impact your ability view Jupiter, provided you have clear skies and minimal light pollution.

If you happen to get your hands on some vision enhancing equipment, you might even be able to make out Jupiter’s largest moons, Europa, Ganymede, Io and Callisto, which were first spotted by Galileo Galilei in the early 17th century. You could also get a glimpse some of the gas giant’s zones and belts, which are the variegated bands of color encircling the planet.

As a backup, and an even more detailed view, NASA’s Juno spacecraft satellite is currently orbiting Jupiter, and has captured some spectacular footage, which you can check out below.

In the arms of the maelstrom: in this view from JunoCam, bright white clouds can be seen popping up in and around the arms of a rotating northern hemisphere storm. https://t.co/p5ms1ZhFa2 pic.twitter.com/p0s1KlCPvL

A giant, spiraling storm in the planet’s southern hemisphere is captured in this animation from my latest flyby. https://t.co/AkGmvvL24P pic.twitter.com/KuCpHOg6cF