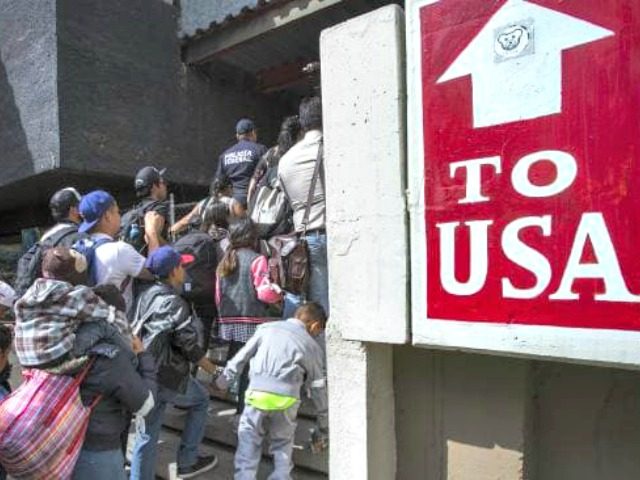 President Donald Trump has announced an immigration reform deal with the Mexican government which likely will allow border officials to end the catch-and-release of Central American migrants.

Ending catch-and-release is a huge win for Americans and Trump because it means border officials now have a legal alternative to the catch-and-release rules which allow migrants to legally enter the United States if they bring children and claim asylum.

Those catch-and-release rules set by Congress and the courts also allow the migrants to get work permits before their asylum court hearings, which are now backlogged for two or more years.

Instead of catch-and-release, the migrants can be returned to Mexico until their asylum claims can be heard by a judge.

The “joint declaration” was outlined in a State Department message:

… those [migrants] crossing the U.S. Southern Border to seek asylum will be rapidly returned to Mexico where they may await the adjudication of their [US.] asylum claims.

In response, Mexico will authorize the entrance of all of those individuals for humanitarian reasons, in compliance with its international obligations, while they await the adjudication of their asylum claims. Mexico will also offer jobs, healthcare, and education according to its principles.

The United States commits to work to accelerate the adjudication of asylum claims and to conclude removal proceeding as expeditiously as possible.

Both parties also agree that, in the event the measure adopted do not have the expected results, they will take further actions.

Mexico’s agreement to offer jobs and healthcare to the migrants will weaken lawsuits by pro-migration U.S. groups that oppose the deal.

In exchange, the U.S will also work with Mexico to spur regional economic development.

Mexico also promised to step up police enforcement against the cartels’ labor trafficking from Central America into the United States:

Mexico will take unprecedented steps to increase enforcement to curb irregular migration, to include the deployment of its National Guard throughout Mexico, giving priority to its southern border.

The promise of extra enforcement is vague, and far less important to U.S. border security than the return of migrants to Mexico.

However, border officials face the practical problem of processing migrants for return to Mexico at a faster rate than the cartels can bus them up to the border. If the border agencies cannot keep pace with the cartels’ transport networks, they may be forced to release some migrants into the United States.

The compromise deal allows Mexico to dodge the escalating tariffs that Donald Trump promised, and it also means that Mexico does not have to formally declare itself a “safe third country.”

Trump and his deputies wanted Mexico to declare itself a safe third country because that would give U.S. border officials the permanent legal authority to reject migrants who cross through Mexico. But the Mexican government’s agreement to host the migrants before their U.S. court hearings provide similar legal authority to U.S. border agencies,

The deal means that border agencies will not have to release migrants into the United States prior to their asylum hearings.

The end of catch-and-release will likely wreck the cartels’ labor-trafficking business, which depends on migrants getting U.S. jobs to repay their smuggling debts. Few poor people in Honduras, El Salvador, or Guatemala will go into debt with the cartels, or mortgage their farms and homes to the cartels, once they know they will be forced to remain in Mexico prior to their asylum hearings.

The reduction of migration will also help stabilize the Central Americans countries, which is needed before foreign investors build farms or factories in those nations.