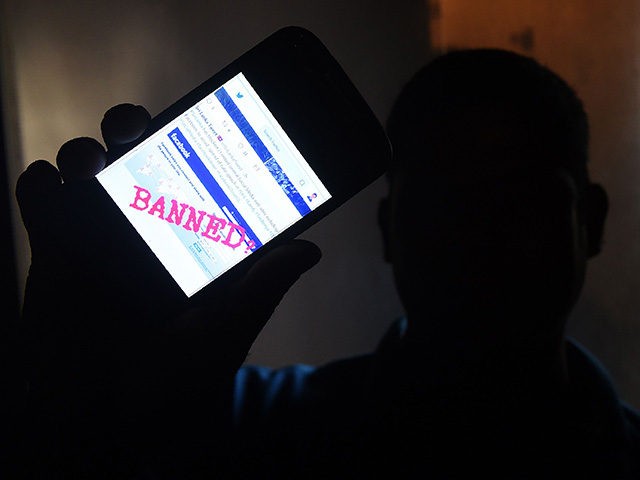 For the passive conservatives — those who prefer losing but remaining “principled” while the left does everything it takes to win, those who believe no hill is worth dying on — the battle for social media is over.

The right should cede the battlegrounds of Facebook and Twitter to politicized Big Tech and the social justice warriors holding its leash, as the right has given ground before every left-wing cultural offensive for the past fifty years. We let the left take over education and entertainment and that worked out just fine, didn’t it?

Writing at National Review on Monday, Sam Sweeney advised conservatives to “close your social media accounts” and simply walk away from this bizarre and unruly new form of mass communications. Sweeney himself did so years ago and said he is much happier without the stress of participating in social media, although he admitted to being an occasional reader of Twitter posts.

Sweeney argued that walking away from social media will liberate conservatives from the increasingly tight grip of the Masters of the Universe:

My advice: Delete your Facebook, yesterday. Don’t get your news from Twitter. The issues of free speech on social media will no longer matter to you. They don’t matter to me. I’ve made a decision not to subjugate myself to the whims of our new overlords. They can open their platform to everyone from neo-Nazis to Kim Jong-un, or they can have a litmus test that includes denouncing Donald Trump or the pope at regular intervals — a sort of school-bathroom pass fitting for our generation’s extended adolescence in which Mark Zuckerberg plays the schoolmarm. It won’t affect my life either way. In my own mind at least, I am free because these things no longer define my life. I am happier as a result. I can still read a book of some length, an ability I see dropping off sharply among my peers.

Not having Facebook is the 21st-century equivalent of becoming a cloistered monk. If I can just stop opening Twitter, I will feel like I’ve replaced Saint Simeon on his pillar. Monastic jokes aside, let me tell you: Life doesn’t end when you close your social-media accounts. In fact, the day you close them is the day your life truly begins again.

This is not unreasonable advice from a personal perspective, but it would be catastrophic for the conservative movement at large. Individuals who find social media stressful, aggravating, or distracting are well advised to make do without it. If conservatives as a whole walk away and allow the left to control the Internet without a fight, they are dooming themselves to helpless observer status forever.

That would be a fitting end for the strain of conservatism that prefers losing with dignity and kvetching from the sidelines without engaging in pitched political battles. For those conservatives, the best outcome is to be buried with quiet dignity in the sands of history, spotless gloves clutching the hilt of a principled sword that has never tasted blood, a few kind words muttered in eulogy by victorious left-wing associates before they stroll away from the grave site and fling themselves into their next pitched win-at-all-costs battle to redefine America.

There isn’t much ground left to give, and free speech is most definitely what Sun Tzu would describe as “fatal terrain” — the battleground of last resort where retreat is not an option.

If conservatives give up social media to the left and withdraw to a few boutique alternative platforms with zero influence on major media coverage, platforms that will probably exist only until the victorious left gets around to demonetizing them, then right-wingers won’t be winning many more elections. If there’s one thing everyone from American intelligence experts to Chinese censors and Russian troll farmers agrees on, it’s the enormous influence social media exerts on politics.

Sweeney, perhaps unwittingly, alluded to this in his column by admitting he still reads occasional Twitter posts and understands the powerful cultural influence of social media. It cannot have escaped his notice that a great deal of news coverage is shaped by social media, or based almost entirely on tweets and Facebook posts.

President Donald Trump routinely makes headlines with his tweets. Is the Passive Conservative crowd turning away from social media because Trump uses it, so therefore it must be vulgar and beneath them? They might ponder the 2012 election then, where the vastly more aggressive and coordinated efforts of President Barack Obama’s re-election campaign allowed him to box in challenger Mitt Romney, control news coverage about the race, and coordinate supporters. It is astonishing that anyone who remembers either the 2012 or 2016 presidential races could think walking away from social media would be anything but a suicidal handicap for conservatives.

We’ve seen this happen before. When the left consolidated its grip over education, passive conservatives raised a few objections and then abandoned the field. Conservatism is now blacklisted in Hollywood as enthusiastically as communism was in the McCarthy days, with only a few outspoken actors and directors openly fighting back — and some of them have been deplatformed recently. Conservatives were told to retreat from cultural issues after the Reagan years because cultural issues were toxic and moderate voters hate moralistic scolds. Today the left campaigns furiously on cultural issues and dispatches squadrons of moralistic scolds to silence everyone who disagrees with them.

In contrast, conservatives dug in and fought back in the realm of news media, ignoring recommendations to be satisfied with dominating AM radio. Dissenting voices now flourish everywhere from ratings-dominant Fox News to websites like Breitbart News, and the radio shows are still going strong too. The left obviously thinks conservative news media has a major impact on politics — they complain about it constantly and attack it incessantly. The social media battleground is worth fighting for, just as cable and Internet news was.

The argument about social media between opposing factions of conservatism echoes the debate over populism in the 2016 election. Passive Conservatives think populism is icky, emotional appeals are beneath them, and most of the emotional appeals they could make have been ruled out of bounds by the lefties who make the rules.

Left-wingers use populism and emotional appeals with wild abandon. Virtually every appeal made by the Democrat Party is populist. The Democrats don’t waste any time lecturing each other about the evils of populism — they just do it, over and over again, gaining ground on one issue after another.

That’s how the social media debate is proceeding. Passive conservatives accept the ridiculous fallacy that social media companies are both platforms and publishers, immune to all the editorial responsibilities of publications but free to silence anyone they please, for even the most transparently false or absurd reasons. A strange and dangerous new belief that only government can be guilty of censorship is taking hold.

The left, on the other hand, uses every means available to squelch conservative speech and would fight like wildcats if any attempt was made to censor them. They would never for an instant accept the notion that some conservative-dominated company has the right to deplatform them, and they should meekly toddle off to start their own microblogging platform if they don’t like it.

The left makes endless war against Christian bakeries and chicken restaurants for resisting its political demands. A conservative tech company that began deplatforming left-wing writers and organizations would be swiftly brought to heel, without a single thought spared for the “principle” of businesses being allowed to choose their customers. No one cares about the private property rights of business owners when the left launches a civil rights crusade. Why is it wrong for conservative Americans to expect their politicians and thought leaders to launch crusades for their civil rights?

Passive Conservatism’s surrender to left-wing censorship began with arrogant assurances that only a few fringe whack jobs would be deplatformed. In the blink of an eye, we were up to well-established mainstream conservatives like Michelle Malkin getting booted off Facebook for the crime of opposing censorship. Today it’s Project Veritas getting banned from Twitter for the crime of committing investigative journalism against a Big Tech company that decided another popular conservative, Ben Shapiro, was a “white supremacist” who might need a digital muzzle himself.

One might suspect some Passive Conservatives were happy to let the left shut down conservatives they disliked, people who compete with them for eyeballs and make them look irrelevant and ineffectual. They feel secure in the knowledge that their respectable and unthreatening punditry will never be blacklisted. They might want to rethink that judgment because while they were napping, the left made it a bannable offense to discuss bannable offenses. Censorship is going viral. Mentioning someone who was banned might get you banned in turn.

Some of the high-profile blacklistings of conservatives have been temporary. That should not be reassuring to anyone. Temporary bans can do a lot of damage if they’re timed right — say, right in the middle of a red-hot presidential election. Apologies might be offered later, long after the damage is done and the election is safely in the bag for Democrats, who will immediately and aggressively use their power to attack free speech from every conceivable angle.

While the right is nervous about getting whacked with the ban hammer for spreading anything that might be labeled “disinformation” or “conspiracy theorizing,” the left is free to spread all the disinformation and conspiracy theories it pleases. People like failed Georgia gubernatorial candidate Stacey Abrams are free to spread false, irresponsible, and incredibly divisive conspiracy theories about stolen elections without the slightest fear of deplatforming. The left will have a monopoly on passion and outrage while the right unilaterally disarms.

Too many conservatives fail to understand that fighting messy, risky, vicious battles on the frontiers of politics is the only way to get a seat at the table when the rules for the next conflict are written. They are constantly focused on process while the left cares only about outcomes.

The outcome most desired by the left is to “win” arguments forever by silencing the other side. Allowing the left to make progress toward that outcome without a fight is incredibly dangerous. Nothing would please Democrat strategists more than a quiet exodus of dispirited conservatives from social media just as the 2020 election heats up. Left-wingers have seen what happens when conservatives fall back from cultural battlefields, and they’ve been very pleased with the results.

The classic Star Trek episode “A Taste of Armageddon” featured a war fought by aliens who decided real combat is too brutal and unpredictable, so they fought their war through computer simulations and ordered the casualties from imaginary battles to march into extermination booths for a quick and painless demise. Passive conservatives walk with silent dignity to the extermination booth when informed they have lost another cultural battle. It’s so much cleaner and less painful than fighting tooth and nail to defend the principles they keep talking about.