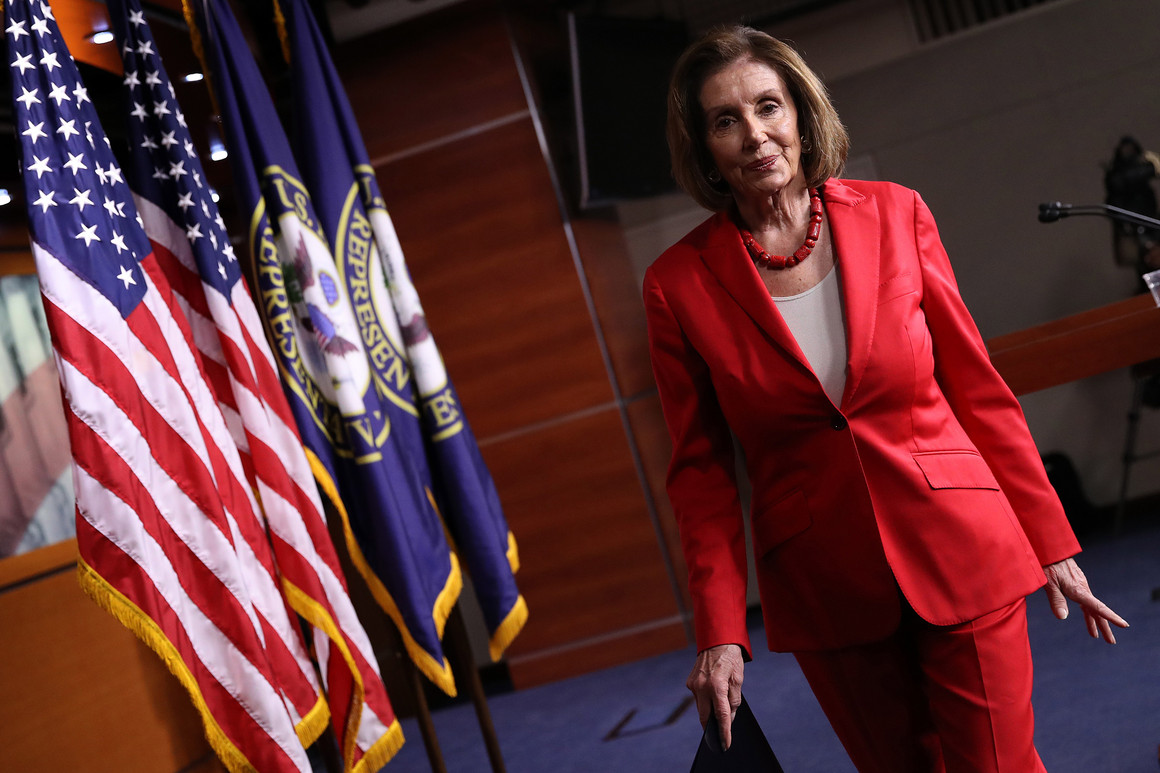 Speaker Nancy Pelosi formally bowed to Senate Majority Leader Mitch McConnell in a weeks-long battle with the GOP over the border aid bill, saying the House will take up the Senate’s version of the relief package.

The move caps four days of havoc amid a contentious debate within Pelosi’s caucus over how to respond to the mounting humanitarian crisis.

In a stunning reversal, Pelosi halted a planned vote on the House Democrats’ version of the border aid bill as she and her deputies faced a revolt by a group of more than 18 Democratic centrists, who vowed to tank the bill on the floor.

In a high-profile surrender in a faceoff with McConnell, Pelosi sent a letter to her caucus explaining her rationale.

“The children come first. At the end of the day, we have to make sure that the resources needed to protect the children are available,” she wrote. “Therefore, we will not engage in the same disrespectful behavior that the Senate did in ignoring our priorities. In order to get resources to the children fastest, we will reluctantly pass the Senate bill.”

Hours earlier, Pelosi had an hour-long call with Vice President Mike Pence during which the two discussed administrative fixes as a possible way to appease Democratic demands for tougher restrictions on the border money, according to a source familiar with the conversation.

McConnell said the White House’s concession to comply with some of the Democratic requests administratively was an attempt by Pence “to be as accommodating as possible.”

“We did not in the end continue to play political games over this. They did. And it’s their problem to solve,” McConnell said. “I’m proud of the Senate for stepping up.”

The Senate bill is expected to easily clear the House, with nearly all House Republicans and likely a majority of House Democrats willing to support it.

The struggle within the House Democratic caucus over the border bill is perhaps the roughest stretch of Pelosi’s speakership, with clashes between the left and moderate wings on full display and no clear escape to the chaos.

The California Democrat has been personally involved in negotiations throughout the week. She held a late-night meeting Monday to win over her caucus’s progressives, and on Tuesday was furiously whipping her caucus with a list in hand. On Wednesday, she spoke by phone with President Donald Trump.

By Thursday afternoon, Pelosi and her leadership team huddled in her office to make plans to take up the Senate’s bill, giving in to intense pressure within their caucus and from Republicans.

The House had planned to vote Thursday on its amended version of the border package. But roughly 18 moderates vowed to oppose the bill on the floor, according to multiple sources familiar with the whip count.

Rep. Stephanie Murphy (D-Fla), a leader of the Blue Dog Coalition, confirmed that multiple moderates had been planning to buck the party on a procedural vote on the floor later Thursday.

“We have a significant number,” Murphy said. When asked if it was enough to tank the bill on the floor, “That is to be determined.”

“We’re going to see if we can kill it,” one Democratic lawmaker said.

House Democrats unveiled the new package overnight, which adds several Democratic provisions to the Senate’s $4.6 billion bill aimed at addressing the sprawling humanitarian crisis at the border. The additions — many of which come from the House’s competing legislation — would place additional restrictions on how the administration may spend the money and specify basic standards of care for the thousands of migrant children being held at the border, many in reportedly horrific conditions.

Democratic moderates specifically criticized a move to reduce funding for the Immigration and Customs Enforcement agency, compared to the Senate version, which they argued would cut funding to combat human trafficking.

The White House made clear that it would oppose the House bill over the new policy additions, and McConnell affirmed that his chamber would move to kill it.

The “Senate bill is the only game in town. It’s time to quit playing games. Time to make law,” McConnell said earlier Thursday.

During a closed-door meeting with her caucus on Thursday morning, Pelosi did not rule out consideration of the original Senate bill, but called McConnell “completely and totally disrespectful,” attendees said.

With plans in flux for much of the day, House Republicans staged a protest move on the floor to further pressure Democrats, demanding that the House take up the Senate bill.

Negotiations between the House and Senate had been nonexistent on Thursday, with lawmakers in both chambers vowing that they would not leave town for the week-long July Fourth recess without passing the humanitarian funding.

The Office of Refugee Resettlement, which is already struggling to care for tens of thousands of migrant children, has warned it will run out of funds as soon as this month.

The border funding debate, which has roiled the Democratic caucus for weeks, has put Pelosi and House leaders in a difficult spot — particularly as their Senate Democratic colleagues agreed to their own deal with Republicans.

Pressure has been mounting publicly as disturbing images and reports have emerged from the border. Pelosi was visibly upset when asked Thursday about the photo of the migrant father and young daughter who drowned while trying to cross the Rio Grande River this week. The speaker refused to assign political blame but took a long pause before looking up with tears in her eyes.

“This is such a tragedy,” she said. “I just think it’s such a shame for that to be the face of America around the world.”

Moderate lawmakers had begun calling on Pelosi to simply bring the clean Senate bill up in the House for a vote on Wednesday, raising the issue in leadership meetings and in conversations on the floor.

But Pelosi also faced pushback from a vocal coalition of progressives, who didn’t want to send Trump any additional federal money without first attaching guardrails to ensure the funds can’t be diverted for other uses, including increased deportations.

Progressive leaders, who had fought tooth and nail to add a slew of new provisions in the House bill, say they still oppose the Senate version — and complained about their centrist colleagues

“No one should be advocating for the Republican proposal in the Senate if you’re in the House,” Rep. Mark Pocan (D-Wis.), co-chair of the Congressional Progressive Caucus, said Thursday.

The CPC also released a sharply worded statement on the Senate bill, before their leaders had officially announced plans to take it up: “The Republican Senate Emergency Supplemental is entirely insufficient to protect vulnerable children in our care.”

Jake Sherman and John Bresnahan contributed to this report.