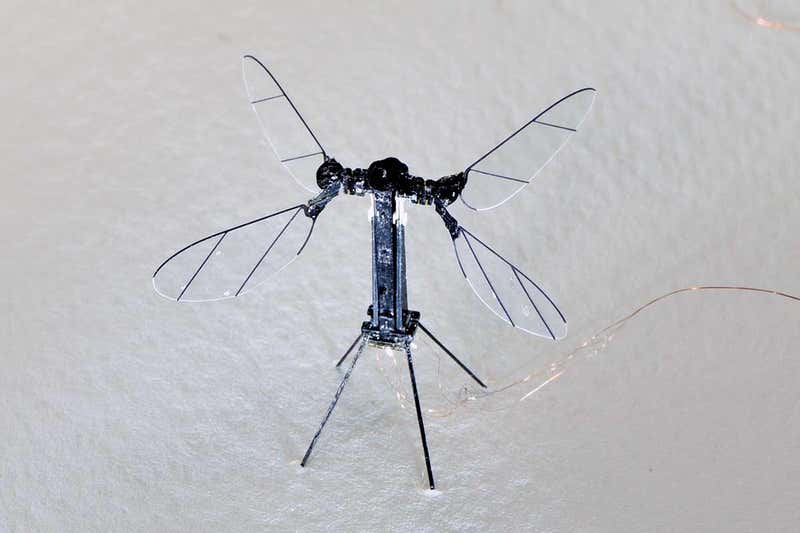 A solar-powered winged robot has become the lightest machine capable of flying without being attached to a power source.

Weighing just 259 milligrams, the insect-inspired RoboBee X-Wing has four wings that flap 170 times per second. It has a wingspan of 3.5 centimetres and stands 6.5 centimetres high.

The flying robot was developed by Noah Jafferis and his colleagues at Harvard University.

Its wings are controlled by two muscle-like plates that contract when voltage passes through them. They are powered by six tiny solar cells weighing 10 milligrams each, which are located above the wings so as not to interfere with flight.

The insect robot’s wings begin flapping when exposed to light. Currently, it has only been tested in the lab, where it is powered by a combination of halogen and LED lighting, says Jafferis.

Limited by the positioning of the artificial lighting, the robot normally flies for around half a second before it leaves the field of light. The robot currently requires the equivalent of three times the intensity of natural sunlight, so isn’t yet able to fly outside.

Jafferis says the robot could one day be used for monitoring the environment or manoeuvring through small spaces.

“It’s very light for its size,” he says. “If you needed to land on a leaf, you could, whereas a commercial quadcopter would be too heavy to do that.”

In future versions, the team hopes to enable the robot to fly in sunlight and incorporate sensing mechanisms. “It can then really control what it’s doing when it’s flying around,” says Jafferis.

Other researchers at the University of Washington have created a 43-milligram robot that flies with no moving parts, but it still requires external wires for power.