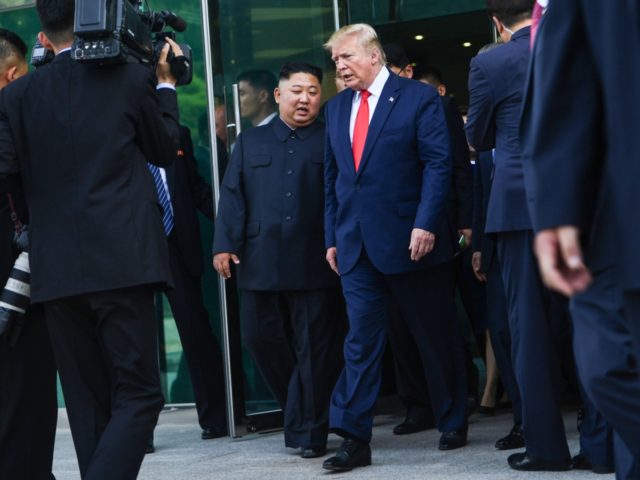 President Donald Trump shook hands with North Korea’s Kim Jong-Un at the heavily fortified Demilitarized Zone on Sunday, making Trump the first American leader to step into the isolated Communist country in what he called “a great day for the world.”

Contact between the two sides has since been minimal, but the two leaders have exchanged a series of letters and Trump turned to Twitter on Saturday to issue his offer which was quickly taken up.

🚨BEHIND SCENES: President @realDonaldTrump and Chairman Kim conclude their meeting at the Freedom House…. pic.twitter.com/VUGvl5A0BG

“I was proud to step over the line,” Trump told Kim as they met in a building known as “Freedom House” on the South Korean side of the village. “It is a great day for the world.”

Kim hailed the moment, saying of Trump, “I believe this is an expression of his willingness to eliminate all the unfortunate past and open a new future.” He added he was “surprised” when Trump invited him meet.

As he stood beside Kim, Trump told reporters he would invite the North Korean leader to the United States, potentially even to the White House.

“I would invite him right now,” Trump said. Kim, speaking through a translator,replied it would be an “honor” to invite Trump to the North Korean capital of Pyongyang “at the right time.”

The two men were also joined by South Korean President Moon Jae-in and later met privately for an hour of talks.

At a press conference after the event, Trump noted there has been no recent ballistic missile tests by North Korea.

There had been some “very small ones” – he added, but theres were missile tests which “practically every country does.”

“We don’t consider that a test. We are talking about long range missile tests.”

Trump finished by saying he was going to go off an speak with U.S. troops stationed at a nearby military base.

AP/AFP contributed to this report