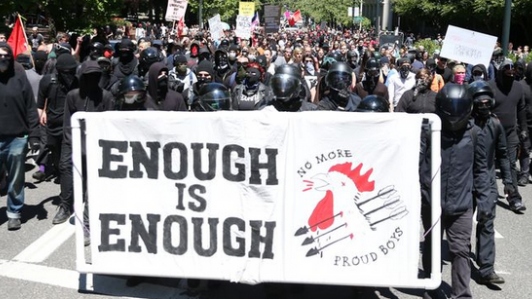 On Wednesday, Media Research Center President Brent Bozell and other conservative leaders called on Facebook to live up to its own standards when it comes to standing up to violent and extremist groups like Antifa. Bozell explained that “no action has been taken to de-platform this domestic terrorist organization.”  He added that “Facebook is enabling these extremists to commit more violent acts and further spread their hateful message.”

Here are the statements by conservative leaders:

“The Antifa-led assaults in Portland this past weekend were not the first instance of violence from this militant-leftist group. Antifa’s core principles condone and encourage the harassment and physical assault of those that disagree with their beliefs. The Department of Homeland Security has classified their activities as “domestic terrorist violence.” Facebook has just come out with a major document outlining how some 90 leftist organizations under the leadership of former American Civil Liberties Union executive Laura Murphy and Facebook COO Sheryl Sandberg will be overseeing the site’s content. Their community standards certainly condemn violence and they claim to have “always banned individuals or organizations that promote or engage in violence and hate, regardless of ideology.” And yet no action has been taken to de-platform this domestic terrorist organization. In allowing Antifa to retain its accounts, Facebook is enabling these extremists to commit more violent acts and further spread their hateful message. Facebook must enforce its policies equally. This is not a partisan issue. There should be no place for violent extremists of any kind on Facebook. Period.”

“The case of Andy Ngo, clearly demonstrates the lack of appreciation that the left and Antifa thugs have for our constitution and our 1st Amendment rights. They apparently never learned the childhood adage, “— that ‘sticks and stones may break my bones, but words will never hurt me,” and instead believe that they can silence speech through violence. Americans should wake up to the threat to our 1st Amendment liberties coming from everyone from Facebook de-platforming conservatives to violence against mainstream conservatives.”

“Rose City Antifa uses its Facebook page to foment hate and train their goons on tactics to anonymously harrass, disrupt, and assault anyone who disagrees with their radical agenda. The latest result is the attack on journalist Andy Ngo – which is not fake news, is not merely words that people claim is hurtful, but is a serious and violent crime. Facebook needs to explain why it moves to deplatform and stifle the voices of peaceful conservatives while allowing its platform to be used by radical leftist fascists like Rose City Antifa to organize events that routinely result in violent assaults against innocent bystanders.”

Heartland Institute
“By continuing to allow Antifa related groups to spew hate on its platform, Facebook executives and its board of directors are now tacitly encouraging violence against conservatives. Facebook’s opposition to my proposal seeking ideological balance on the company’s board is proof positive that it has no interest in hearing from conservatives. But this latest instance of Antifa violence against conservative journalist Andy Ngo – and Facebook’s unwillingness to take down Antifa pages – proves that the company needs to hear from conservatives if it’s going to operate as a neutral platform.”

National Center for Public Policy Research
“As a former journalist myself, there’s no excuse whatsoever for my former profession not exposing Antifa for what it is, a terrorist communistic controlled anti-American hate group. I’m disgusted with my former profession’s lack of objective reporting. Sad.”

60 Plus Association
“There is no excuse for violence, especially when it comes to political discourse.  This is domestic terrorism at it’s worst.  We are a nation of laws, and a democratic Republic depends on free speech and a free press.  America will not be terrorized.”

“The hypocrisy of Facebook is stunning.  It shamelessly censors conservative opinions while allowing Antifa, which routinely assaults journalists, to operate freely.  The FBI has classified Antifa as ‘domestic terrorists.’  Big Tech must be held accountable for its abuse of free speech.”

American Values
“The assault of Andy Ngo is absolutely abhorrent but predictable from Antifa. Conservative college students have felt the wrath of the radical leftist terrorist group at UC Berkeley and other campuses across the country. Facebook’s selective outrage over extremism on their platform is disgraceful.”

Lone Conservative
“If members of a conservative activist group dressed in black hoodies wearing black masks were to assault innocent persons whom they disagreed with—beating them relentlessly—they would properly be branded as terrorists. Yet the fascists who comprise Antifa are allowed a platform by Facebook to legitimize their violent agenda. There is no moral defense that can be made on behalf of Antifa.”

Catholic League for Religious and Civil Rights
“Over the last few months, it’s become increasingly clear that Antifa groups and large social media platforms like Facebook have something important in common: both are seeking to silence conservative speech, one through violence and intimidation and the other through clandestine censorship. Last week’s incident in Portland involving Antifa’s assault on journalist Andy Ngo has fully exposed the hypocrisy of Silicon Valley’s elite, who claim to oppose the misuse of their platforms by violent extemists even as they largely turn a blind eye to Antifa’s destructive activities. It’s long past time these companies start answering for this blatant double standard.”

“Facebook allows AntiFa, the flipside of the same coin as Neo Nazism. And yet they routinely ban middle of the road conservatives, including gay, Muslim, black, and other minorities simply because they’re on the political right. If Facebook wants to highlight why they deserve no legislative protections like S230 of the Communications Decency Act, and should be treated as a biased monopoly, they could do no better favor to us than continuing this heinous practise.”

Human Events
“Let’s see, in the last few months Facebook has blocked Rev. Franklin Graham, censored paid ads by pro-life civil-rights activist Alveda King, censored an image of Santa Claus kneeling before the baby Jesus deeming it ‘violent or graphic content,’ shut down two Facebook pages managed by triple-amputee Iraq War vet Brian Kolfage, and removed a post consisting almost entirely of text from the Declaration of Independence. Yet groups openly affiliated with Antifa – a fascist, terrorist movement that doesn’t just preach violence but continually practices it against innocents – are welcomed with open arms on the pages of Facebook.”

WND.com
“Violent black bloc thugs are a clear and present danger to our country. It is clear local law enforcement in Portland and elsewhere are not willing to protect us from them. It is past time for federal law enforcement event to step in.”

Center for Family and Human Rights
“Over the last few months, it’s become increasingly clear that antifa groups and large social media platforms like Facebook have something important in common: both are seeking to silence conservative speech, one through violence and intimidation and the other through clandestine censorship. Last week’s incident in Portland involving antifa’s assault on journalist Andy Ngo has fully exposed the hypocrisy of Silicon Valley’s elite, who claim to oppose the misuse of their platforms by violent extemists even as they largely turn a blind eye to antifa’s destructive activities. It’s long past time these companies start answering for this blatant double standard.”

“Facebook’s refusal to remove Antifa and these leftist hate filled groups from their platform, shows their support of these groups and their actions. Facebook has blood on their hands and should be held accountable.”
Amy Kremer

Women for Trump
“The idea that Facebook would indulge, if not outright promote, a terrorist organization like Antifa, while regularly labeling as “dangerous” various conservatives they dislike, is not just absurd but shameful. Like it or not, Facebook is a public square. It has been an enormous boon to mankind; it is choosing to become an Orwellian nightmare.”

“Antifa’s attacks on free speech are a tragic reality that Students for Life has had to face on campuses, especially when I have taken a pro-life message to schools. I know what it’s like for Antifa protestors to try and stop peaceful, pro-life speech, and have had to arrange for security just to address the human rights issue of our day. For Facebook to block or suppress conservative speech because of a bias against ideas — like helping both mother and preborn baby — while allowing those who advocate for actual violence shows a political bent that ignores common sense and common decency.”

“For all the attacks leveled at groups like ours – who just want less government intrusion in our lives, and to be left alone to enjoy our family and friends – the real dangers to freedom are those like Antifa who perpetuate violence against people they disagree with politically, and platforms like Facebook who support them by giving them a semblance of credibility. That Facebook bans conservatives because the company doesn’t like their words, but Antifa remains in good standing after many examples of destroying property and causing serious harm to other people, tells us everything we need to know about Facebook’s concern for ‘dialogue’ and ‘inclusion’. The hypocrisy is outrageous.”

“Antifa has no business operating and organizing their riots and violence on Facebook and other social media platforms. For years now, Antifa has demonstrated to be a radical left-wing terror organization that regularly uses violence and intimidation tactics to silence their political enemies. Is this the type of people Facebook wants to enable? Are these the kind of events Facebook wants to play a role in organizing?

Freedom of Speech is vital, and Facebook should never ban organizations and people simply for being controversial. They should ban them for engaging in acts of domestic terror.”