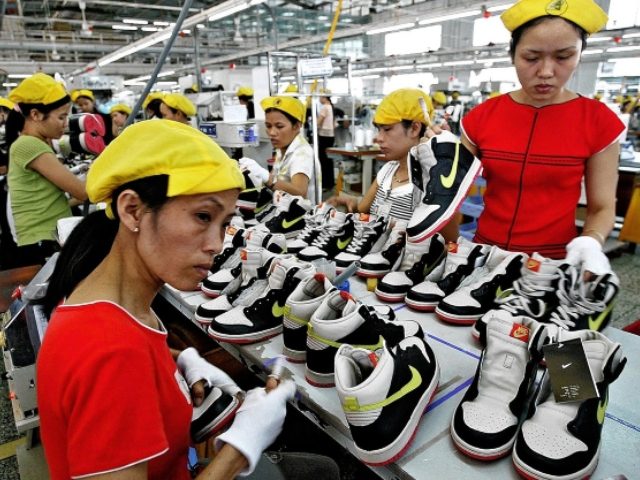 In the 1990s sportswear giant Nike became a target of complaints because it used sweatshop labor in Asia to manufacture its products. Despite subsequent efforts to end the practice, some human rights activists say the company still has issues with unsafe and unfair labor practices.

The sportswear company made a splash on Tuesday by pulling a product line featuring an American flag after former NFL player Colin Kaepernick complained that the flag was symbolic of “racism,” “hate,” and “slavery.”

In the ensuing decade, Nike earned many plaudits for its efforts to end sweatshop labor. But despite the renewed reputation as an honest manufacturer, Nike recently ran afoul of human rights and labor activists once again.

In one case, the company was accused of abusive and unsafe working conditions in a factory in Hansa, Vietnam. The accusations sparked protests in Boston, Washington D.C., Bangalore, and San Pedro Sula in Honduras.

Also, in March of 2017 the International Labor Rights Forum insisted that Nike had “turned its back” on labor agreements effectively preventing independent monitors from reviewing conditions in many of its overseas factories.

Other organizations accused Nike of failing to improve its record of abusive labor practices against women in many of these factories. The groups have criticized Nike because female workers make less than a dollar an hour for a 48 hour week making Nike shoes in factories in Vietnam. By some accounts, Nike’s Vietnamese workforce is up to 85 percent female.

Missouri Sen. Josh Hawley also criticized Nike over its labor practices in the wake of its decision to dump the Betsy Ross-themed shoe.

“Nike is a symbol of everything wrong with the corporate economy,” the Sen. tweeted on Tuesday. “They take advantage of our laws but send jobs overseas for sweatshop wages, partner w repressive regimes, aggressively avoid paying any US taxes, and then tell Americans to shut up and buy their stuff.”