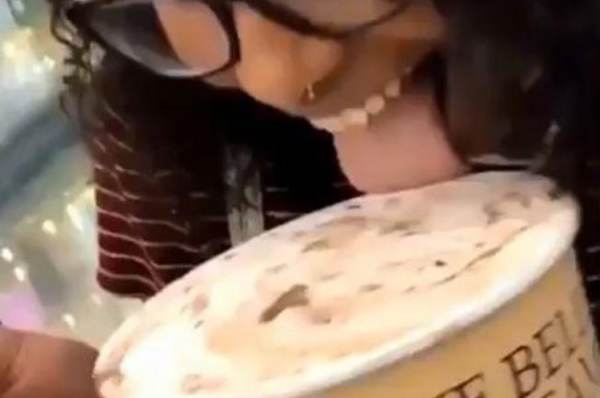 A woman is facing up to 20 years in prison for “tampering with a consumer product” after a video of her opening a gallon of Blue Bell ice cream, licking it, then putting it back into the grocery store freezer went viral on social media.

According to Blue Bell, staff recognized where the “malicious act of food tampering took place.”

Blue Bell said they removed all the “Tin Roof” gallons of ice cream from the freezer of the San Antonio Walmart “out of abundance of caution.”

“The safety of our ice cream is our highest priority, and we work hard to maintain the highest level of confidence of our customers,” Blue Bell said in its statement. “Food tampering is not a joke, and we will not tolerate tampering with our products. We are grateful to the customers who alerted us and provided us with information.”

Police are confident that they have identified the woman from surveillance video and will be issuing an arrest warrant shortly.

Blue Bell inspected the freezer where the licking incident took place and said it believes it located the half gallon of Tin Roof that was “tampered with,” the statement said.

She could face a second-degree felony charge of tampering with a consumer product, the Lufkin police department said in an email statement to NBC News. The charge comes with a two- to 20-year prison term and up to $10,000 in fines, according to Texas state penal code.

Investigators are also in discussions with the FDA and additional federal charges could be made.

Watch the woman lick the Blue Bell ice cream then put it back in the grocery store freezer:

What kinda psychopathic behavior is this?! pic.twitter.com/T8AIdGpmuS