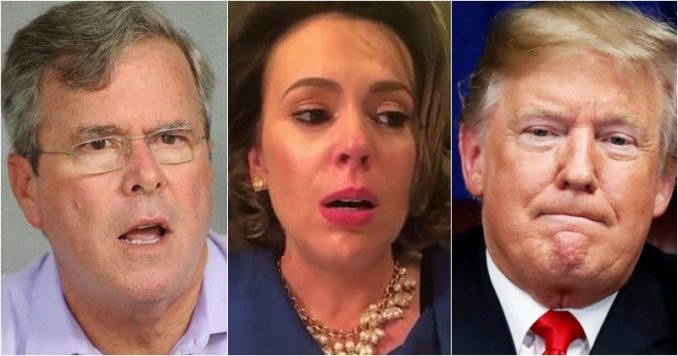 Alyssa Milano, the leftwing actress-activist, is cringing at the Democratic field for president. So, she came up with a brilliant plan: Jeb Bush. That’s right, Milano hates President Donald Trump so much she’d rather have any Republican and told Jeb he should “seriously” consider a run in 2020.  Well, that didn’t end well, and the joke was all on her. You’ll love this.

“If [I] were @JebBush, I’d seriously be considering a run,” Milano said to her 3.6 million Twitter followers.

If were @JebBush, I’d seriously be considering a run.

“The tweet could signal hesitancy among Democrats. While over 20 candidates are vying to challenge Trump in 2020, some Democrats – such as Milano – are actively hoping for a Republican to successfully primary the president as well,” Breitbart reported.

And how does Jeb feel about 2020? Well, he has no plans to go back on stage with Trump. Who can forget Trump’s nickname: Low Energy Jeb. “I think someone should run. Just because Republicans ought to be given a choice,” said Bush, back in March.

“But to have a conversation about what it is to be a conservative I think is important,” he added. “And our country needs to have competing ideologies that people — that are dynamic, that focus on the world we’re in and the world we’re moving towards rather than revert back to a nostalgic time.”

No one’s buying anything poor Jeb is selling. Even “Never Trump” John Kasich knows there is no path to anyone but Trump as the GOP nominee. Kasich floated the idea about a 2020 run and quickly found out the president is backed by over 90 percent of the Republican Party.

“There is no path right now for me. I don’t see a way to get there,” Kasich told CNN.

“Ninety percent of the Republican Party supports him,” he continued, adding that he could not get involved in a political race, knowing he would lose. And Americans were also quick to point out to Alyssa Milano the ridiculous nature of her tweet.

“Oh Alyssa, you know he tried right?? Like the whole Jeb! thing with lots of money but it didn’t go so well. . .” tweeted Ned Ryun.

Oh Alyssa, you know he tried right?? Like the whole Jeb! thing with lots of money but it didn’t go so well. . . https://t.co/DQUyo0IOZQ

“Ladies and gentlemen- the dumbest woman on earth,” tweeted Twitter user “It’s all coming out soon.”

Ladies and gentlemen- the dumbest woman on earth. https://t.co/Sd5RxWdcTD

Former Massachusetts Gov. Bill Weld (R) launched an official White House bid in April, stating that he would be “ashamed” if he did not “raise my hand and run.”

“I really think if we have six more years of the same stuff we’ve had out of the White House the last two years, that would be a political tragedy, and I would fear for the republic,” he told CNN’s The Lead in April.

Weld’s second-quarter fundraising numbers are – by most standards – abysmal. He raised $688,000 from just 7,000 donors. Reason Magazine put this in greater perspective, noting that Democrat Montana Gov. Steve Bullock – who is currently running for president and failed to make the first round of debates – raised $2 million this quarter.

“President Donald Trump’s re-election campaign and the Republican National Committee said on Tuesday they raised a whopping $105 million for the second quarter of 2019 as they strive to hit their ambitious $1 billion goal for the 2020 race,” reports ABC News.

The staggering number comes from the joint fundraising committee between the campaign and the RNC —the Trump Victory Committee —which says it currently has $100 million in cash on hand.

According to sources in the campaign, this massive chunk of change on hand provides them enough resources to not only expand in states the president must win in 2020, but it also gives the campaign “playing money” to dip into states like New Mexico, Nevada, Minnesota and even Oregon where they believe there’s a chance to make in-roads in states the president lost in 2016.

This is incredible news for Trump who won the presidency on a shoestring budget in 2016. Just imagine what he can do with a war chest that rivals the Clintons or the Bushs. It certainly will be fun to watch.